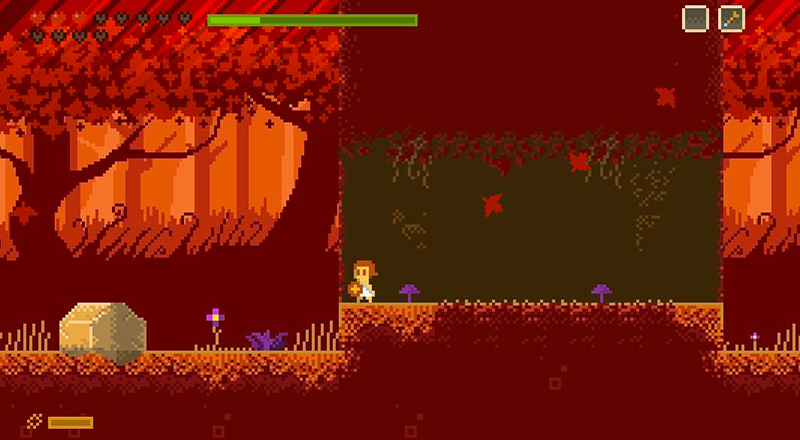 It seems we’re in the middle of an indie game renaissance, with new gems around every corner—it’s actually a bit overwhelming. While I like branching out, sometimes catering to the familiar helps sell me on an idea. I absolutely love two-dimensional platformers like Metroid and Castlevania as they were the mainstays in my formative gaming years. The Legend of Zelda series in particular has so many different titles and play styles—there’s really something there for everyone. Ansimuz Games obviously felt the same way, which is where Elliot Quest comes in. This title proudly advertises that love of retro adventuring in a way that embraces the old-school without alienating the new-school.

The eponymous hero awakens in a forest while cryptic messages creep across the top of the screen, rambling on about satars, guardians and immortality. The graphic style immediately reminds me of Zelda II: The Adventure of Link, which warms my heart. Periodically, the internal dialogue chimes in, totally unprovoked, detracting somewhat from narrative pacing. Truth be told, the plot isn’t exactly engaging, but the real success is within the small moments between. One rainy locale introduced a mysterious hooded figure demanding a turtle shell toll. I wanted no part in Mr. Mystery’s turtle soup potluck, but clearly I had no other choice. I still wake up at night sometimes in a cold sweat, screaming, “Franklin, no!” Later on, another mysterious hooded figure (even referring to himself as such) offers assistance for evil-doing, touching on the game’s subtle but familiar morality system: Do bad, get bad ending; do good, get good ending. There are a couple moments like the aforementioned example which impact it, but you wouldn’t really know it unless you look for it.

Elliot Quest is also deceptively larger than expected for a game with a $12.99 price tag ($9.99 on Steam), meaning the bizarre concern that “price equates to content” is moot (though there is a 1:28:49 speedrun). This is in part because of its difficulty and checkpoint system, strangely reminiscent of the Souls series. There are strange stone tablets that resurrect you upon inevitable death, and they’re pretty sparse throughout the dungeons. The difficulty and lack of handholding is on par with’90s-era gaming, where precision and patience factor heavily at every turn. There’s a cave in the desert that extracted a good two hours’ worth of my tortured cries, all because of some fucking snails—part of me prayed I would find a salt shaker nestled somewhere within the toga of utility. Combat contributes to the challenge, but doesn’t hinder enjoyment.

Elliot’s primary attack is an upgradable bow and arrow. When first he wakes in the forest, he can lob arrows about five feet at a downward arc with a pretty slow rate of fire. This in turn forces the player to adapt in a fun way. The various interactive mechanisms aren’t very intuitive though, making the open-world design a bit daunting. The game doesn’t tell you where to go, what to do, nor how to do it at any given moment, save for the occasional townsfolk request. This leads to a bit of aimless wandering and backtracking. There’s no real direction indicated, just wherever you can reach with the items in your possession and the memory of those locations. Various items such as the shield, the wings, and different forms of magic allow Elliot access new areas, much like in the Metroid and Zelda games. As much as I love gloves-off gameplay instruction, I would at least appreciate an item description so I can better understand its function rather than tedious trial and error. Yes, discovering new ways to utilize acquired accoutrements can be fun, but at least offer a three-word remark. I’ll even take “this is shovel,” simply so that I know it’s a shovel—8-bit graphics generally don’t offer much in the way of clarity.

Elliot Quest feels right at home on the Wii U. The console’s seldom-utilized tablet peripheral works great as an inventory management hub. While it’s easy enough to press a button to access the map and character skill table, I enjoyed the convenience of simply glancing down at the screen to get my bearings in a dungeon or swap magic on the fly. I noticed after playing for a few hours that the television screen starts tearing at the seams. Streaks of white appear, bogging down frame rate to frequent stutters. Restarting the game fixed this issue, but it seems symptomatic of extended play sessions.

All in all, I adore this game. Its punishing yet rewarding design allow for some truly glorious moments of accomplishment. There’s a low-to-moderate amount of replayability for those who want to see the other endings, but honestly, a single playthrough validates the purchase. Retro game fans will find their appetites sated here—hell, Elliot Quest might even inspire some to “dust off” some of those ’90s titles on the Wii U’s Virtual Console.