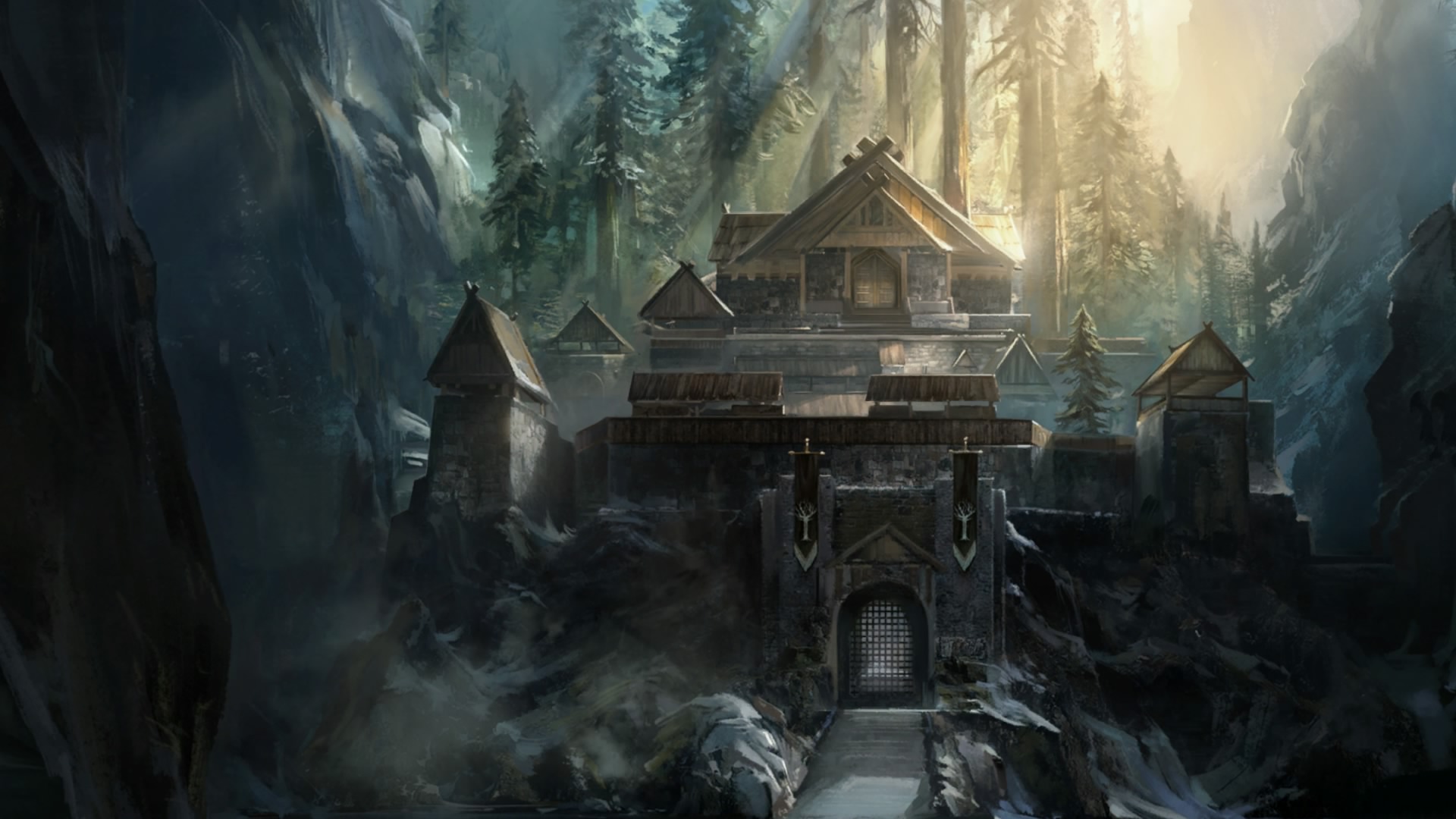 So sleepy, so peaceful, so doomed.

Review: Game of Thrones Episode 5: A Nest of Vipers

Game of Thrones Episode 5: A Nest of Vipers
Telltale Games

While Telltale Games has done an excellent job with their Game of Thrones series up to this point, I had always felt like it was approaching the franchise a little lightly. Yet, in the back of my mind, I knew that something was coming. It was there in those little cues that let the player know that a character would remember something about what you said, but never took it any farther than that. While those little payoffs would come episode after episode, anyone could see dark clouds building on the horizon. This time around, we see the lightning strike, and it ain’t pretty. Be wary, dear reader, for…

A Nest of Vipers

After seeing none other than Ramsay Bolton sitting at the Lord’s table in Ironrath at the end of Episode Four, it was pretty clear that the hammer was coming down in A Nest of Vipers. Ramsay makes it pretty clear that he is quite pissed with Rodrik and decides to cease his intervention in the conflict between the Forresters and the Whitehills. Instead, he’s ready to leave the two families to duke things out Thunderdome-style, leaving the militarily superior Whitehills with a distinct advantage. Just to make sure Rodrik knows he’s not bluffing, he decides to flay Arthur Glenmore alive. Leaving the fragile alliance between the Forresters and Glenmores at an awkward impasse, Ramsay totters off, presumably to completely fuck up someone else’s day.

As if that wasn’t bad enough, Talia lets you know that she’s discovered a spy for the Whitehills in Ironrath, and that it’s somebody you know very well. Showing that she’s becoming a jaded, stone-cold hardass, she tells Rodrik that he has to kill him to satisfy her bloodlust. Or vengeance, or whatever—fact is, this is probably the fifth time a woman in Rodrik’s life has told him he has to go kill somebody, and for the first time, it actually seems like a pretty good idea. That is, until you walk in and see that the traitor is not only a friend, but a member of your small council. In fact, it’s either Duncan or Ser Royland, depending on which one Ethan Forrester spurned from the Sentinelship early in Episode One! It seems, as always, that karma is a bitch in Westeros. Not only has he been spilling secrets to the mortal enemies of House Forrester, but he just let Gryff Whitehill escape—assuming you let him live a couple episodes ago, of course.

No matter how much the traitor protests that they were trying to save House Forrester, you have to decide whether to slay or imprison him. Either way, they let you in on a little secret—Gryff is laying a trap for Asher, and he’s on his way soon. What’s a Lord to do but run to his brother’s aid?

Speaking of Asher, he has a meeting with Danaerys Targaryen in the aftermath of the invasion of Meereen. Even though you totally did her a solid by risking your life to take over her newest conquest, she can’t let you take any of her mercenaries along for the ride to save House Forrester. She does, however, reward you for following orders, and gives you a whole chest of shiny gold coins with which to buy other soldiers. Luckily, Beshka’s got some connections with a group of pit fighters that she used to hang with. Well, actually she used to fight with and kill them, but apparently that’s their thing. Different strokes, and all that.

When Asher tries to buy them off, he realizes he’s probably going to have to fight one of them to show that he’s the big king badass of Fight City. When he manages to live through the ordeal, he has a chance to give them a rousing speech that, hopefully, can win them over to fight for House Forrester. They seemed pretty eager once I told them that they would be able to stab and kill as many people as they wanted to when they arrived in Westeros, which convinced them to follow me down to the docks.

After using the rest of your cheddar to buy a boat, Asher says goodbye to his uncle Malcolm, who has decided to hang back and chill with the Khaleesi for a bit, just to make sure that House Forrester has a powerful friend in Westeros—whenever she decides to come and conquer it, that is. Thus, he sets sail for home, not knowing that he’s basically sailing straight into a trap.

Meanwhile, it seems like Mira Forrester is getting her own taste of the harsh reality of King’s Landing, losing what seemed like her only ally—Sera Flowers. To make matters worse, she gets picked up by some guards and hauled over to Tyrion Lannister’s room, where Queen Cersei is waiting to interrogate her. Luckily, all the guile and deceit Mira has had to hide from everyone else wins her brownie points with the queen, but then she sends Mira on a difficult mission—to figure out who Tyrion plans to name as his champion in his trial by combat.

Unfortunately, Mira’s budding impishness is nothing compared to the Imp himself. Even if she tries to lie, Tyrion susses out the truth, giving some valuable life lessons about not trusting evil queens and trying to make things up with Margaery. Oh well, at least you get a little wine out of the deal.

At least she’s not poor Gared, who’s freezing his ass off north of The Wall with a couple of Night’s Watch deserters and a pissed-off Wildling girl. Although he can impress her with his archery skills, Sylvi still adamantly refuses to take Gared to the North Grove, claiming that it’s pretty much certain death. As if to underscore that point, the Wildlings that Gared and company killed earlier show up, clearly undead and ready to rip out some throats.

This seems to convince Sylvi that making a run for the North Grove might not be the worst idea, and it seems like Gared is plenty pleased to leave some whitewalkers behind. His story seems like it progressed the least A Nest of Vipers, but the mysterious North Grove looms ahead, and it’s still unclear just how this grove is going to help the Forresters survive the coming war with the Whitehills. In fact, this whole episode so far has seemed like it’s the prelude to some big event in Episode Six. The player could be forgiven for thinking that some big battle is on the horizon, and that House Forrester—maybe, just maybe—has a fighting chance. Telltale does an excellent job of crafting their narrative such that the Forresters do seem legitimately resilient. The George R. R. Martin formula of suspending protagonists on a pendulum between doom and triumph seems to be here in full force. However, up to A Nest of Vipers, the deaths of major characters never seemed to come as much more than an unpleasant surprise. Even Ethan Forrester’s death in Episode One was little more than a gut punch, with hardly enough character development behind him to make the player feel legitimately remorseful. It felt practically unavoidable, and with the dangerous Ramsay Bolton on the other end of the knife, it was hard not to see it coming. The other viewpoint characters have their brushes with death from time to time, but the game just ends when they do, prompting the player to try again.

Yet, while it might be easy to dismiss this lack of the ol’ blood-and-guts by Telltale, one could also argue that the company has simply been waiting for the perfect moment to surgically remove one of our darlings, someone we’ve come to admire and trust through the course of this series.

Or, even worse, it’s going to make us complicit in their death.

Seriously, guys. Here there be spoilers.

As Asher’s boat floats on into a Westeros harbor, the player gets a little shot of dread to the base of the spine. It’s pretty clear that something awful is about to happen, and Asher has absolutely no idea.

Creeping through the eerily empty harbor town, it’s hard not to feel on edge, knowing that Whitehills could be hiding around any corner, catching Asher unawares. When escape is in sight, however, the portcullis falls, and a whole Red Wedding’s worth of crossbow bolts go whizzing around the courtyard. Luckily, Asher and his pit fighter buddies are made of strong stuff, and they win themselves a few seconds to react.

Just then, Rodrik shows up, ready to save his little brother. One of the bigger pit fighters lets him and a few fighters in under the portcullis, but when the pit fighter dies, the Forresters are outnumbered and trapped together. They realize that, in order to survive, one of the brothers is going to have to hold the portcullis open long enough to save the other.

The player gets a choice. Who’s staying back? Is it the indomitable Rodrik, who has survived death once before only to just barely save House Forrester from certain annihilation? What about Asher, whose likeable attitude has won him an army, but whose brashness also won him exile in the first place? The game slows down, giving the player plenty of time to contemplate this decision, knowing full well that whoever stays behind is absolutely, positively going to die.

It took me awhile, but in the end, I chose Rodrik as the one to stay behind. Maybe Asher won me over with his charming character and fighting skills, but I also felt that Rodrik would be hard-pressed to command Asher’s group of sellswords without pissing them off. I think, though, that any decision comes with a fair bit of rationalization. I’m going to miss Rodrik’s steady hand in the final episode, and I imagine I’ll be playing Game of Thrones Episode Five: A Nest of Vipers again, just to see how things could have ended up differently.

The last few moments of the character who stays behind are spent fighting an awesome last stand, slaying as many Whitehill soldiers as possible before getting taken down. I briefly hoped that I’d get a chance to stab Gryff’s smug, ugly little face, but when his bodyguards pressed in, I knew it was the end. Way to taunt the player with their good deeds, Telltale. I should have killed that asshole two episodes ago.

Coming Up: The Ice Dragon

It’s clear that this was the pivotal episode, the one that brought all of House Forrester’s bad (and good) decisions back around on them. However, the climax is still yet to come. With the episode closing on such a difficult, heart-wrenching choice, it’s hard not to know that this is going to be a big factor in the ending of this marvelous series.

For now, though, we still don’t have a release date on Episode Six. As far as I’m concerned, it can’t come fast enough. I just know that Telltale isn’t going to pull any punches from here on out, and things are about to get ugly for House Forrester. The question is whether or not it will end up uglier for House Whitehill. Stay tuned.