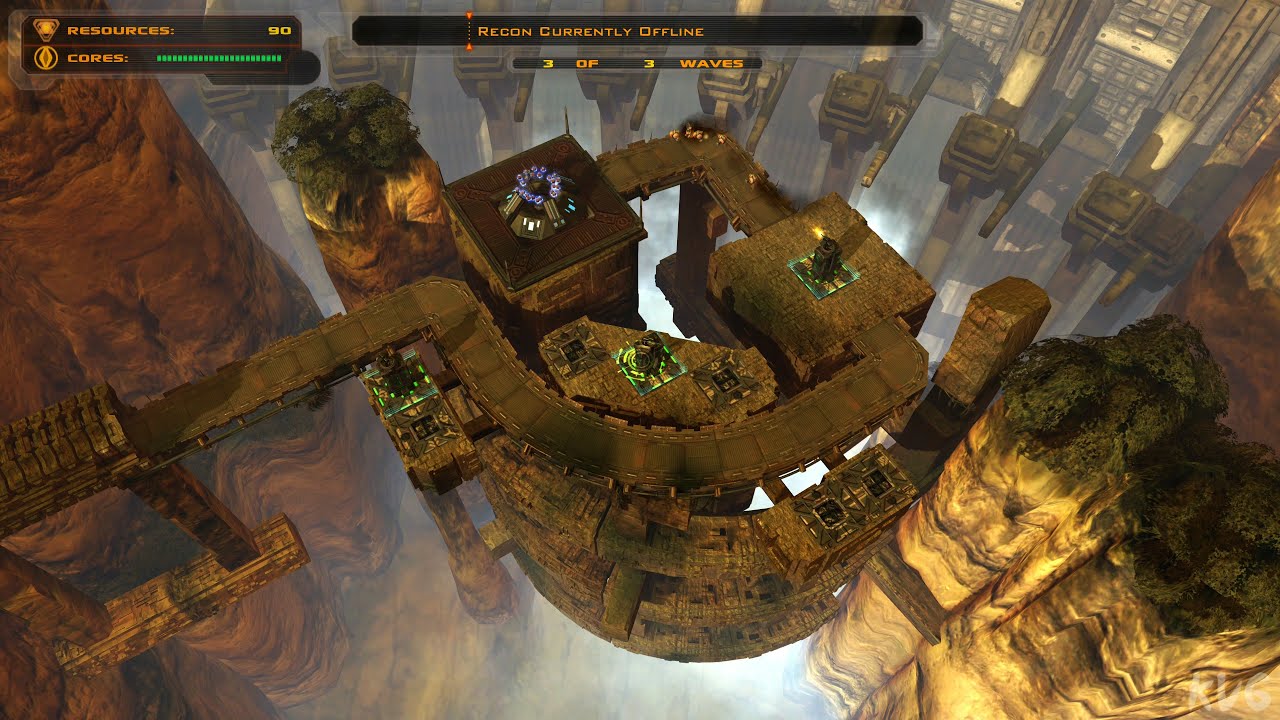 If you’ve ever played any sort of RTS online for more than a week, chances are that you’ve played some sort of home-brewed “tower defense” map. The formula is often the same: Build up a maze of towers that kills hordes of increasing sizes before they get from one end of the map to the other. Sounds pretty boring, right?

Well, sometimes. Ever since Starcraft, people have been throwing together the same old shit year after year. At its core, Defense Grid is just like every other tower defense map or game ever made. Yet, somehow, it’s done oh-so-much better and is consistently a blast to play. Included are 20 maps set in surprisingly unique locales, taking you anywhere from your destroyed hometown to ice caps and giant satellite dishes. Every hostile alien has a distinct feel and ability, as do the towers you can build to mow down said aliens. Even beyond the obvious features of this game, every aspect shows that the developer really aimed at making the best tower defense game thus far.

As for the learning curve, there’s zip, zilch, not a fuckin’ half-consideration here. If you’ve played the game for more than 10 seconds, you know exactly what’s going on. Don’t get cocky though, the level of difficulty scales quite nicely as you progress further into the game. New towers are systematically presented to you to kill those aliens in unique and fun ways.

Since this game can be had for only $20, there’s really no reason not to pick it up. It’s an incredible diversion, can be played in short bursts of time and will provide at least 10 hours of overall goodness. Wrap all of that up with some pretty graphics that won’t bend your system over, and you might just have the pinnacle of an RTS classic in your hands. –Ross Solomon

I struggled with the first F.E.A.R. game because the combat was pretty fun, but much of the rest suffered from a general sense of mediocrity. I’ve never been one to buy into the whole cheap, jump out and say “boo” scare tactic because it is often a contrived game design element. That’s not to say that there aren’t some classic well-done moments such as Resident Evil’s famous “dogs,” but overall, it just falls apart quickly if the rest of the game doesn’t have the frame to support it. These gripes are my big complaint with F.E.A.R. 2. The writer’s reasons to justify all of the scare tactics slowly reveal themselves to be rather underwhelming, which makes much of the game fall flat. Gradually, the experience just stops being scary and becomes an annoying distraction more than anything else. This isn’t, however, to say it is a bad game, but I did feel like I was just going through the motions on this one. The combat is still fun and remains above the cut, even if movement feels more restricted than in the first game. For example, you can’t lean around corners anymore. There are now also awesome destructive moments where you can run around in a gigantic mech for almost no reason at all, mowing down everything that looks at you funny. The sound design is once again top-notch and provides a rather claustrophobic and looming atmosphere. But there’s rarely a feeling of actual danger in the game because health kits are plentiful and the combat isn’t very challenging, even on the highest difficulty level. Still, I’d recommend checking this game out for a fun weekend of action and terror. Just don’t expect to be blown away. –Conor Dow

I clearly remember being of the opinion that there would never be a Street Fighter IV, but here we are. Most people probably don’t realize that there was a Street Fighter III, and probably less still realize that there were three of them. The truth for most people is that Street Fighter ended after Super Street Fighter II Turbo. It didn’t, and the fact is that SFIII: Third Strike is (and will probably continue to be) the most competitively played Street Fighter. So, how does SFIV measure up? Well, in terms of story timeline, it falls between SSFIIT and SFIII. So it is with gameplay as well. Gone are parrying and SFIII characters. EX attacks are present, as are two-button throws. All of your favorite OG characters (read by most: Ken and Ryu) made it out for this one and if you tore it up with Guile in SSFIIT, you’ll probably be able to do the same in SFIV. New to the series is the focus attack, which, when fully charged, is unblockable. This is where the game gets surprisingly technical and probably what most new strategies will pivot upon. Casual SF players won’t want to take the time to learn the intricacies of this system, but competitive players will. There are only a handful of new characters and some (the obviously SNK-inspired Crimson Viper and Abel) are better than others (Rufus … For real?), but it’s clear that the objective with this one was to keep it familiar. This game is a masterpiece. This is what a new Street Fighter game should feel like. SFIV can be as simple or as technical as you want it to be and this is one point where it succeeds where SFIII didn’t. Street Fighter is still relevant and this game can be played and enjoyed by anybody. If you’re an old fan, this will make you remember why you liked Street Fighter in the first place. If you’ve never played a Street Fighter game before, this is an excellent place to start. – Aaron Day