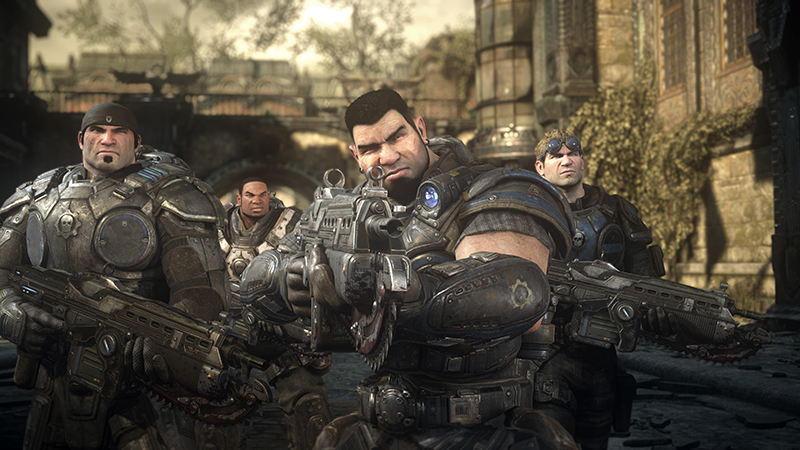 If I had to pick a single reason why I love Gears of War … well, I’d be at a loss for words. It isn’t just the way Epic Games adapted cover and blind-fire mechanics from games like Kill.Switch, or those “bro-fist-bump” moments playing through the campaign with your buddy. It isn’t even the clutch midair headshots that win multiplayer matches, and it certainly isn’t the glaringly obvious absurdity of the franchise. No, it’s all of these moments and more which won me over and solidified Gears as my go-to game—it’s actually responsible for how my awesome girlfriend and I started dating. So when Rod Fergusson officially announced a remastered version on stage at E3 2015, my mind raced with equal parts enthusiasm and trepidation. Does it live up to the efforts of its forefathers? In the immortal words of the Cole Train, “Hell yeah, baby!”

Gears of War: Ultimate Edition is no simple HD next-gen port. The developers at The Coalition (formerly Black Tusk Studios) rebuilt the 2006 release from the ground up in this definitive celebration of what made the series so successful in the first place: Tactical carnage. I grew up playing a lot of Unreal Tournament for that heart-pumping, breakneck, twitch-shot action, so naturally I took to Gears like a duck to water. Once I started up the campaign, I couldn’t stop mentioning how beautiful it looks. As I finished baptizing the Berserker and moved into Act II, I had to stop and gawk at the scenery—rather than duplicating the original game’s shadow oversaturation, Ultimate Edition revitalizes the “destroyed beauty” tagline with a brighter color palette dripping with melancholy. The horizon casts a glimmer of hope in the distance, but something far more perverse looms overhead with the approaching sunset.

It’s surprising how quickly I picked things back up, and I embrace the updates, such as the marking system, with welcoming arms. They didn’t just rebuild the visuals; they also threw in gameplay and control improvements from different points in the series without detracting from that original Gears feel. It might sound cheesy, but I had a big shit-eating grin on my face the first time Marcus said, “Scratch one grub!” after spraying down a Locust drone—this is the Gears I fondly remember. However, the game is not without its faults. The AI throughout the campaign fell pretty damn short of the mark. I don’t know if my memory is hazy, but the frequency with which my computer teammates were down seemed obnoxiously higher than before. Throughout Act IV’s second chapter, “Bad to Worse,” my computer counterparts struggled to maintain proximity, especially in heated firefights, and remained behind cover—refusing to budge an inch. They also have a tendency to bug out and shift into cover at odd intervals. The latter hiccups didn’t really hinder gameplay, but I’m a little concerned when my squad can’t back me up on the Insane difficulty level.

There’s also about 90 minutes’ worth of “new” gameplay, and by that I mean previously available only on PC. Act V features five full chapters, ending in an epic Brumak battle. I never had a chance to play the PC port, so this was completely new to me. It’s a fantastic section with enough content to stand as its own act, adding greater incentive for the other Xbox-only players to explore even more content. COG tags also have more value than before: Each set of tags unlocks a new page from four comic book miniseries, offering history and context to the Fenix family. The addition of these comic book pages is a fantastic reward for collectors like myself who love exploration. This is one of the many brand-loyalty moves The Coalition gets right. It illustrates their passion and investment in the Gears universe.

Gears has a reputation for some of the most heated competitive multiplayer around. Present in this collection are 19 maps—18 from the original and all DLC plus a new community map called “Boxes,” a close-quarters arena for the new 2v2 mode. Team Deathmatch mode—first introduced in Gears of War 3—returns here, providing a more accessible competitive experience. The weapons feel like they should and respond flawlessly in all of its new 1080p 60fps glory. That’s right: Gears multiplayer is now in 60fps, and holy shit is it smooth. I honestly didn’t realize how much better it could be, but 30 minutes in convinced me it’s the only true way to compete. The beta had a few choppy moments throughout, but it seems like they ironed out much of its wrinkles since then. A fully live environment will likely highlight issues, but the fact remains that this is the best way to play trash your friends and strangers in Gears again.

Gears of War: Ultimate Edition is a masterfully executed tribute to a series close to the hearts of millions. I had some reservations when I first heard about it, but after spending an already embarrassing amount of time bathing in the blood of the Locust Horde, I can confidently say that this franchise could find no better home than with The Coalition. It’s also Microsoft’s spearhead for the next stage of their console war stratagem—backwards compatibility. Every price point (ranging from the standard edition’s $39.99 to the deluxe version’s $59.99) comes with the first, second, and third Gears of War games, as well as Gears of War: Judgement, absolutely free—if you purchase and play Ultimate Edition before December 31st, 2015. The Microsoft Store even offers a $10 gift card for purchasing a physical copy, essentially knocking the price down to $29.99. I seriously can’t think of a single reason why you shouldn’t buy this game, and any doubts about Gears of War’s future just got wiped away like a skull meeting a Gnasher. If Ultimate Edition is a litmus test for The Coalition’s capabilities, I just got a whole lot more covetous for Gears 4. Whether you’re a die-hard fan or new to the planet Sera, this is unquestionably the best remastering I’ve ever played. Grab a friend, rev your chainsaws, and charge once more into the breach.