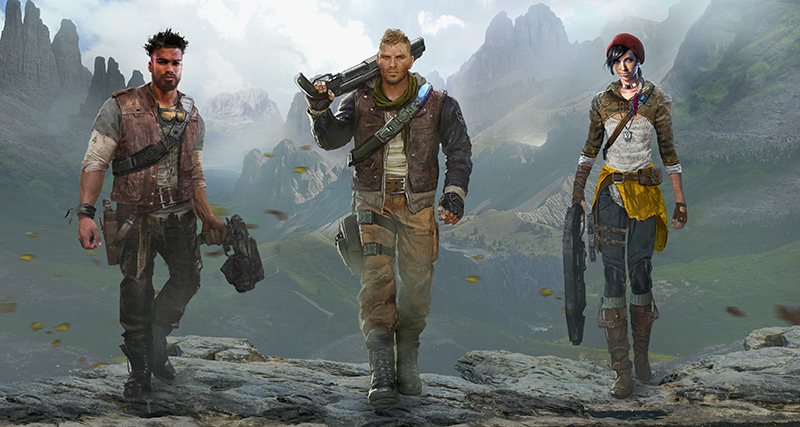 Gears of War 4
The Coalition

The legacies we leave behind…

There aren’t many games that are defined as much by their sound effects as Gears of War: The revving of a chainsaw bayonet against flesh. The wet, crunching squish as a foe’s skull explodes from a well-executed headshot. The echoing thrumming of an over-distorted guitar as you cleared an area from the pervading threat of the Locust Horde. Originally developed by Epic Games, the Gears series saw huge success over its three main entries (and a fourth prequel entry named Gears of War: Judgement, developed by Epic-owned studio, People Can Fly), which was wrapped up with the ultimate defeat of the Locust threat in Gears of War 3. As you might guess, all is not well on planet Sera 25 years later. Gears of War 4 shatters a hard-fought peace when nearby settlements start disappearing. James Dominic “JD” Fenix and his rebellious friends Delmont “Del” Walker and Kait “No Abbreviation” Diaz investigate these recent disappearances with the help of retired veteran, Marcus Fenix, the previous protagonist. The Outsiders fulfill a role similar to the previous trilogy’s Stranded faction, but this time, that perspective is much more interesting than “Fuck the Coalition because war,” as the Coalition of Ordered Governments, or COGs, have basically turned civilization into a police state. Say what you will about the bro-fist spectacle that is the staple Gears narrative, but I’ve thoroughly enjoyed the series in all of its goofy glory. The writing here seems to give a wink and a nod to that goofiness with some good-natured, self-aware wisecracks, enriching the experience throughout my time with it.

There are a lot of critics comparing Gears 4 to Star Wars: Episode VII – The Force Awakens in that this mirrors the first entry in many ways, namely that it comes off as a little too safe. I found myself frequently thinking the same thing, but this safety isn’t exactly a bad thing. Much like with Episode VII, there’s a legacy here and with that legacy comes high expectation, notable because this is the first original entry from new developer The Coalition.

I think that it’s smart to recapture some of that initial magic for a new generation, though it occasionally does come at the cost of forging character investment. Soon after your group discovers that there’s a new threat, they seek the aid of JD’s father, Marcus. This should also come as no surprise to anyone paying even the slightest attention to the media surrounding the game prior to release as it was reported everywhere. Anyway, from the moment Marcus joins the fray, he steals the show—often “upstaging” the new crew simply by being there. The plot then falls into retreaded territory as the gang delves deeper into the planet in pursuit of a familiarly styled antagonist known as the Swarm. The game ends on an ambiguous revelation, reaffirming players that there are definitely more Gears games in their future.

How does Gears 4 actually play, though? It may be that the original Gears of War came out 10 years ago, but the newest entry takes the cliché “If it isn’t broken, don’t fix it” to heart. Any concerns that I brought with me—such as whether or not the series would attempt to upend controls (i.e. Judgement)—were immediately assuaged once I fired up the campaign. The moment-to-moment gameplay carries over from the original trilogy and it’s what keeps me coming back for more punishment. There’s also quite a lot to keep you entertained here outside of the main campaign, with competitive and social PVP, as well as the trademark Horde (now dubbed 3.0) mode. Keep in mind that there is a lineage to the multiplayer component, so it’s very likely that you will face crushing defeat time and time again by what can only be described as “joystick sorcery.” It’s seriously remarkable to watch high-level Gears competition, but at times it’s equally infuriating. Horde is certainly where I feel less pressure, yet there’s no less fun to be had. I did encounter numerous matchmaking hiccups while looking for online Horde groups—in one instance, we failed once on wave 50 and could not restart from the current wave. We had to call it a night on that sour note which was a massive letdown.

The game’s greatest shortcoming is its approach to “free-to-play” style microtransactions. It isn’t so much that they exist within the game, it’s that they cripple meta-progression for the class-based Horde 3.0 mode. You can only acquire skills for your class through loot boxes, purchasable via the in-game credit system or real money—this isn’t necessarily an issue until you notice the rubber cement-like crawl to accumulate enough credits to purchase them. The Coalition acknowledged this particular hindrance by shaving 500 credits off a top-tier box and mildly increased the credit accumulation rate but it does little to address the actual problem: The incorporation of these microtransactions into a big-budget, triple-A title is frankly gross. However, the fact that players continue to purchase these proves the system works and will persist into the future. If you’re looking for the next best Gears game, I don’t think you’ll find disappointment here. I’m certainly going to spend countless hours replaying the well-written campaign and Horde mode with my girlfriend and others dedicated to eradicating the Locu—I mean Swarm threat.

As a note: We did receive a standard copy of the game’s official strategy guide around the time of its release. It’s pretty damn comprehensive with tips and tricks for the various modes, collectible locations, weapon stats, lore information and an achievement guide. In the age of all things digital, it’s certainly nothing that couldn’t be found in a wiki guide somewhere, but it’s convenient to have at your side. It also includes the standard Prima eguide with a redeemable gear pack, further reinforcing the game’s blind-box system. I don’t think it’s exactly worth the $24.99 price point, especially if you plan to invest your money into the gear packs, but if you’re fond of flipping through these kinds of guides, you probably have it already.