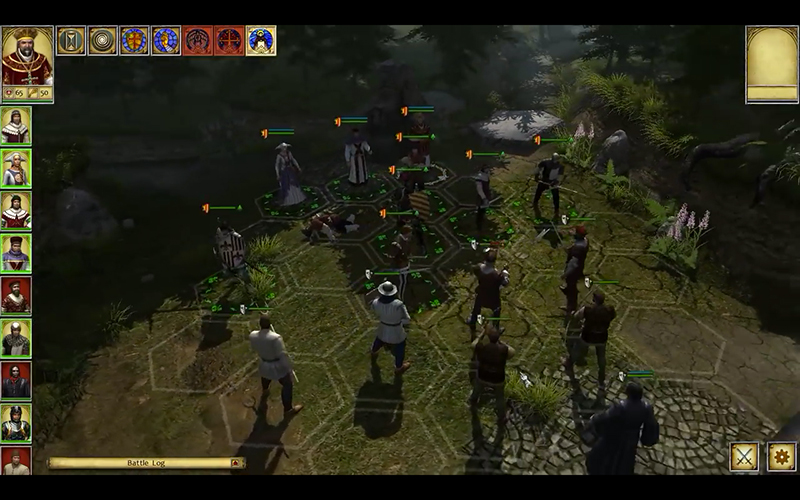 Not pictured: Several minutes of cursing and trying to get your units into the right fucking hexes.

The child of a feudal lord returns home to find their lands in disarray, vassals squabbling with each other and bandits roaming freely across the land. They spring into action, rounding up a small band of dedicated men and women and expand their rule over the disjointed provinces bit by bit. A fantastic premise, but one that Legends of Eisenwald makes about as exciting as waiting in line at the DMV. Apart from a few interesting takes on the low-fantasy setting of medieval Totally Not Germany, Eisenwald failed to capture my interest for any extended amount of time.

Character customization gives you a whopping three options at the game’s outset. You can play as a male knight, a female archer, or a male priest. That’s it. No avatar customization, no switching the genders of those three classes—not even a tiny little notes section to pen in a backstory if you wanted to.

After this truly thrilling decision is made, the game throws you face-first into a tutorial map, which provides you simultaneously with too much information and not enough. You’re given a group of six soldiers to command in turn-based battles on a hexagonal grid, split into a few different categories. Front-line soldiers can dish out damage on foot or from horseback, mid-range fighters include bow and crossbow wielders who deal higher damage the farther they are from their target, and the back row is reserved for support units like priests and herbalists, who can provide protective buffs and healing for your other soldiers. You can purchase equipment for each soldier in your unit, but the cost of outfitting each individual is ridiculous. Quests and battles reward you with paltry sums of gold, and most of that inevitably goes towards healing your troops.

With each battle, your men gain minuscule amounts of experience that eventually can be used to advance them along an evolutionary path granting them additional abilities and heightened stats, with one or two branches along the way for the really exciting units. Combat is tedious, with actions taking ages to execute and the clear victor visible after only a round or so. Laying siege to a castle without being prepared is a good way to get yourself killed, as your units will take a set amount of damage before the battle even begins.

The game’s soundtrack is nothing special—standard fantasy fare consisting of dramatic horns and strings with the occasional drumbeat underneath battles for added tension. The entire nation of Eisenwald is apparently mute. Not a single line in the game is voiced, and the only time your soldiers make any perceptible noise is when they’re getting murdered.

The characters are one-dimensional and prone to wild swings in personality. A particularly jarring moment for me was when my protagonist stopped thieves from defiling an abbot’s grave in a church cemetery, then promptly stole the dead abbot’s skull and waxed poetic about crafting a goblet out of it and drinking wine from the bones of a righteous man. The vassals you meet are either greedy, drunkards, or honor-crazed assholes. The one saving grace of the game’s story is the take it has on the supernatural.

Eisenwald is not a land of magic. Demons are either a drunkard’s delusion or dirty peasants wearing pointy hats. The clawed beasts in the woods are bandits. If someone asks you to get rid of undead, odds are you’ll be killing grave robbers. The most enjoyable parts of the game’s quests are when you use these superstitions to your advantage to prey on the weak minds of your vassals.

For a game released this year, Eisenwald falls flat in terms of tech. The models seem like something you might see in Civilization IV, and there are odd issues with text sizing at higher resolutions that can result in the ends of sentences being cut off screen. The worst thing about Eisenwald is that it’s not a terrible game. It’s thoroughly mediocre, but it’s not terrible. If a little more care had been put into the experience, then I think this game might have been able to stand next to other greats in its niche like Mount and Blade.

Unfortunately, a story that fails to engage the player and technical issues that should have been ironed out during the early access period on Steam hold Eisenwald back, regulating it to the tier of games you might consider buying during a sale when it’s 95% off.