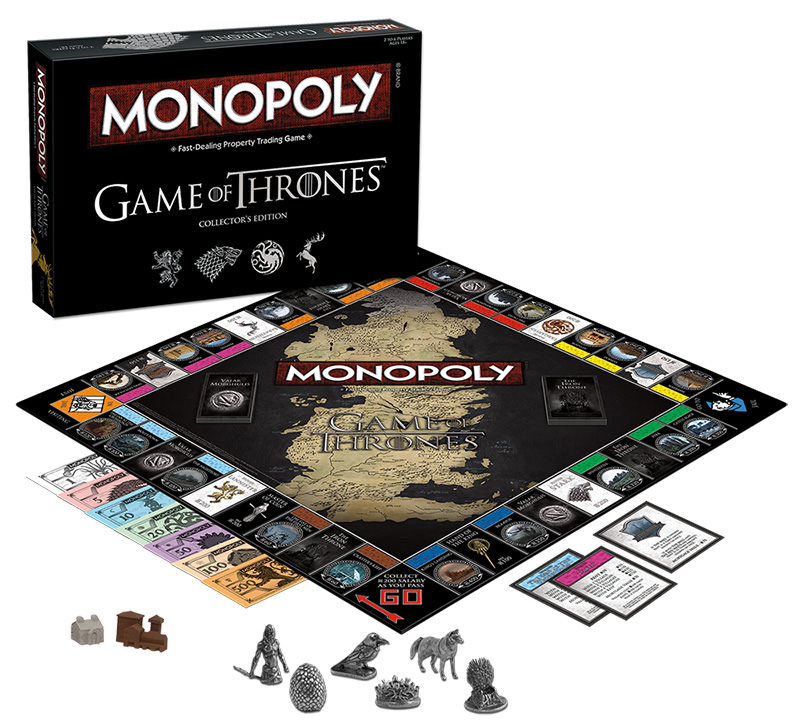 The edition is brand new, but don’t expect any up-to-date references within the content, the majority of which doesn’t get past the second season, with a few exceptions. A minor qualm, to be sure, but let me address the two main issues with this Collector’s Edition: the bank and the Iron Throne. While the Game of Thrones Twitter account referenced the Iron Bank in their announcement of the GOT Monopoly, the game itself makes no such reference—a massive missed opportunity, at the very least the Banker should have been called the Master of Coin. Also, the money for the bank looks like it was designed in Word on a computer operating on Windows 95—in other words, its design quality looks exactly like all other Monopoly money.

This brings me to the other main issue. While the rest of the game pieces look decent enough, the Iron Throne seems more like the back end of a turkey than a seat for the King of the Seven Kingdoms. I’ll take the direwolf or the dragon’s egg over that messed up seat any day (the three-eyed raven, Baratheon crown and White Walker are the other collectible tokens available in this edition). Though it might seem like nitpicking, given the game’s hefty price tag ($59.99), these are certainly issues worth mentioning.

Now that I’ve talked about the issues, let me tell you why you should buy this Collector’s Edition: the board is goddamn gorgeous. Each property square and title deed card contains a beautiful depiction of various locations from around Westeros, and the center of the board is a stunning map of Westeros itself. This thing is pretty as fuck to play on. Fans of the book and/or TV show will have no difficulty looking past the problems to win or die as they play the Game of Thrones … Monopoly.