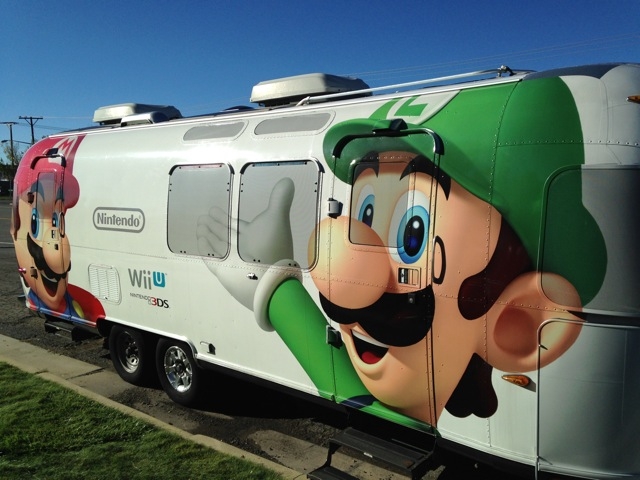 Once a year, right before the rush of the holiday shopping season, the folks at Nintendo load up a trailer with all of their upcoming titles and take it across the country to spread buzz for their future lineup. Salt Lake City had the good fortune of being the Airstream Tour’s first stop, which allowed local Nintendo fans first crack at games that won’t see store shelves until this Christmas.

Though the hi-definition flatscreen TVs that come equipped within the Airstream trailer were very tempting, I had to start with Nintendo’s handheld lineup. I’ve always been impressed with the 3DS—its graphical capability and intuitive touch screen combine into a consistently solid system. The first game I tried out was Sonic Boom, and despite my loyalty to the Super Mario platformers, I had to admit that the game’s got some style. It packs a good balance of the original gameplay, but takes advantage of the system’s 3D graphics to create some interesting dynamics like slingshotting to different areas. I also played a few levels of Shantae, which felt like a throwback to the Mega Man games that I so fondly remember on my DS. The game takes advantage of the touch screen to swap between powerups for Shantae the Genie, plus she uses her purple ponytail as a weapon—a move I’ve not seen since 1991’s Kabuki Quantum Fighter.

When I switched over to the Wii U, I was happy to get a chance to play Super Smash Bros., since it’s getting a ton of hype right now. It’s definitely more streamlined than its predecessors, and the character selection offers some interesting variety. Nintendo Team Member Marcus Suniga also explained that this game, along with Hyrule Warriors will include downloadable content in the future—which means players will be able to expand their repertoire with new characters as the year progresses. The game that actually captured a surprising amount of my attention was Bayonetta 2. Though the game’s aesthetic seems to be based around the leather-clad fantasies of a lonely adolescent male, I had to admit that the frenetic gameplay was smooth and straightforward—not to mention the insane finishers that Bayonetta unleashes upon her enemies.

Though it was great to check out a good portion of Nintendo’s holiday releases, I think the best part of the Airstream Tour was getting a chance to sit down and get a sense of their philosophy towards the gaming industry. With Sony and Microsoft investing huge amounts of money in fighting the console war, Nintendo has consistently been about focusing on the games themselves. “We’ve always been about creating games that bring people together to have fun,” Suniga says. It’s something that I noticed during Nintendo’s press conference at E3. While Sony and Microsoft lobbed their respective bombshells at one another, Nintendo seemed happy to stay inside and focus on developing new, creative content for their systems—and it’s a strategy that’s worked out pretty well for them so far.

Once a year, Nintendo takes a road trip around the country to show off their highly anticipated holiday titles. It’s well equipped with two Wii Us and a few 3DSs, all loaded with the season’s hottest games. Not only that, but they finally let us get a hands on look at the amiibo figures, Nintendo’s addition to the Skylander and Disney Inifinity craze.

My first priority was to check out those amiibos. I was a little disappointed I didn’t get to try them out on a game, but this is their first time out and about so I can’t complain too much. They’re ridiculously detailed, I couldn’t get over just how beautiful they were. Peach is the best example of the crazy attention to detail used in these figures. Peach’s dress has the frills, gold design, and the paint is near perfect. Her eyes aren’t smudged, or weird looking—they look exactly how they should. Kirby, Yoshi and Link were just as detailed, but Peach was just my favorite out of the bunch. That’s not easy to say after being a Zelda fan for years either. So far, the games you’ll get to use these figures with are Captain Toad, Mario Party 10, Yoshi’s Wooly World, Mario Kart 8 (2015) and Super Smash Bros. The core batch consists of Mario, Peach, Yoshi, Donkey Kong, Link, Fox, Samus, Wii Fit Trainer, Villager, Pikachu, Kirby and Marth, and they’re coming out with the Wii U Super Smash Brothers on Nov. 21. Their next batch is Zelda, Diddy Kong, Luigi, Little Mac, Pit and Captain Falcon—they’re due out in December. Pre-order these figures if you can, they are going to sell fast once they hit retailers.

Now onto the obvious game that needs to be talked about—Super Smash Bros. for the Wii U. I played this a few times at E3 but this time around, there were no lines—just the sheer awesomeness of Smash Bros. for a good twenty minutes. It’s so god damned gorgeous in HD, I can’t wait to play it for hours on end. I’ve already picked up and played the hell out of the 3DS version, but it just pales in comparison to its Wii U counterpart. There still weren’t any single-player modes to try out, but that’s not really why you get a Smash Bros. game. There was a bit of lag when there was a ton going on, but it was mostly smooth sailing. This is going to boost the Wii U’s sales for the holidays, just like Mario Kart did in the summer. It’ll launch with amiibo support on Nov. 21 and it’s going to be a monster for the holiday season.

One of the last “big” Nintendo releases is the adorable Captain Toad: Treasure Tracker. It’s out Dec. 5 and I can’t wait. The game is spawned from a few extra levels in Super Mario 3D World—they were something I looked forward to in every world. This marks the first game that Toad is headlining—it’s a puzzle based strategy game, centered around the main characteristics of Toad—he can’t jump or run. You don’t really realize how important jumping is until you can’t do it. Instead of jumping to avoid things, you have to think ahead to get around obstacles. I got to play a boss level with a huge, fire-breathing lava dragon. The level design is meticulous and you really have to use the camera angles to get the best view to see where you should make your next move. It’s smart, and gorgeous in HD—it’s going to be a great, little game.

After the “required” games were played, I wanted to play something different, something I hadn’t played yet. I landed on Bayonetta 2. I know everyone has an idea of Nintendo and it certainly doesn’t include a mature game like Bayonetta 2. It’s outrageous and beautiful—the combat has a really nice rhythm to it, and it’s good, ridiculous fun. Bayonetta 2 takes most of the same moves and fighting styles from its first instalment, but adds a new “Umbran Climax” to the repertoire. Since Nintendo has the exclusive, there are also some sweet Nintendo outfits for Bayonetta to wear. You can get your hands on it later this month, on Oct. 24. Nintendo is adding the first Bayonetta to the retail copies and a discounted price when you buy both on the eShop. I’m really hoping this gives the Wii U some more credibility as a gaming platform, given that it’s an exclusive.

I feel like time went by much faster in the airstream than it does normally. I know time flies when you’re having fun, but seriously, my hour was up before I knew it. I barely scratched the surface of what Nintendo’s bringing to us in the holiday season. Along with the games I actually got to play, they have new Sonic games coming out Nov. 11 for the Wii U and 3DS, and the new Pokémon reboots on Oct. 21. You’ve got plenty to look forward to from Nintendo this holiday season.