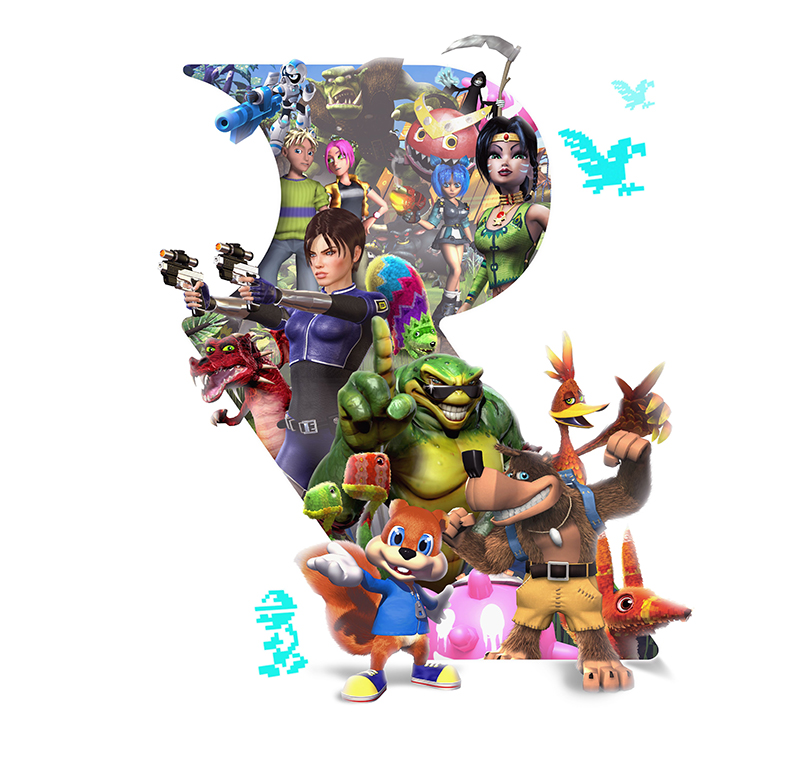 The Nintendo 64 is the greatest, most important console ever. It’s a big claim, but the sheer amount of revolutionary concepts (especially all of the effervescent, fully realized 3D worlds, most of which still look really good today) being brought, en masse, to fruition by one console, was a towering accomplishment. It was an extremely exciting time for video games. Of course, the main developer behind some of the console’s greatest titles (Super Mario 64, Star Fox 64, and Super Smash Bros.) was the console’s namesake. But, beyond Nintendo’s own studios, Rare—a developer who had already established themselves as a major player, especially on the Super Nintendo—enshrined themselves as the gold standard for second-party development for the 64. With releases like Donkey Kong 64, Goldeneye 007, and Banjo-Kazooie, the golden, stylized R emblazoned across the start screen became a signal of quality. Since then, Rare (acquired by Microsoft in 2002) has been in a bit of a rut after a run of underwhelming titles. With Rare Replay, a 30-game collection that spans three decades of releases, Rare is looking to introduce (or reintroduce) gamers to some of the studio’s greatest works, and remind us all how golden they were.

Right away, the presentation of the collection will catch your eye. It’s all packaged to feel like and old-timey movie theater with each title shown as something of a pop-up movie poster. A lot of care was put into how these classics would be shown, especially in the game selection screen, and it should not go unappreciated. As you scroll through the games, it’s like going through something of a video game museum – as you see the evolution of the visuals and plotlines. From the start screen, you can also navigate into a section, called Rare Revealed, that features a number of behind-the-scenes videos, most of which are locked away behind milestones. These videos, from what I’ve seen, are all fully-baked featurettes, and just add to the charm of the whole package.

Of course, all of this wouldn’t matter if it wasn’t for the games. With 30 offerings, there is plenty here for every gamer’s tastes. There’s no way in hell I’m going to go over every single one, but I want to highlight some of my favorites. Strangely enough, I probably have spent the most time perfecting Jetpac—a game that was made by Rare founders Tim and Chris Stamper in 1983, before Rare even existed. Beyond that, I’ve happily sunk a number of hours into Conker, Battletoads, the Banjo-Kazooie games and Viva Piñata. My favorite experience in the whole collection is a goofy 3D beat em’ up called Grabbed by the Ghoulies. This relatively unknown title that originally appeared on the first Xbox has been completely remastered to run natively on the Xbox One. It’s a game I was completely unfamiliar with going in, and, though it’s laughably simple, it was a joy to experience. The collection is missing some of Rare’s most classic titles—namely the Donkey Kong games, 007, and WWF WrestleMania—obviously because of licensing reasons, but the amount of content here is still a bit overwhelming.

The third section on the start screen, and my favorite feature, is Snapshots. These are a selection of challenges for some of the titles, that mixes up the experience a bit. When I say challenges, I mean it. The first one, for example, from Jetpac, is to put together your ship, collect six fuel drops, and blast off within 60 seconds. This is insanely difficult, as evidenced by this video. Rare has packed about 100 of these super-digestible challenges into the game, and it makes for a perfect fix for anyone who only has a few minutes to play.

For better or worse, this console generation has been flooded with re-masters, re-releases, and collections of old games. Rare Replay stands atop the heap as a shining example of how to do these things exactly right. After years of stumbling, and trying to regain footing as a studio that stands for quality, Rare Replay, along with the E3 nnouncement trailer for Sea of Thieves, has seemingly put Rare—a studio responsible for helping to make the N64 the best console ever (among other things)—on the path to reinsert themselves as the gold standard in gaming.