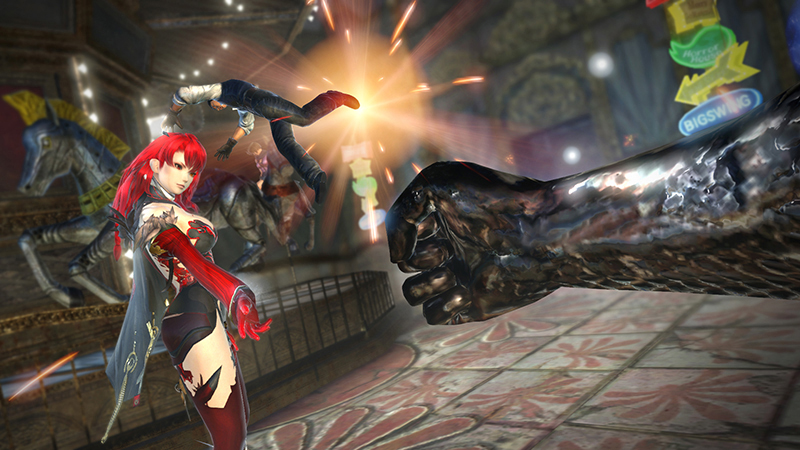 You know, no matter how often I see it, a giant doom fist punching people into oblivion never gets old.

I’m completely new to the Deception video games series, and I wish I wasn’t. Deception IV: The Nightmare Princess is a smart, original and, above all else, fun game. Let’s go back though to where it all started with 1996’s Tecmo’s Deception. It debuted on the PlayStation 1 and, unlike later titles in the series, was a first-person game that made references to—GASP—Satanism! The back of the games case actually said “WARNING: This game contains satanic references.” I’m guessing Tecmo got some backlash from the whole Satan thing, because they then went on to drop all references of him altogether later in the series. The fun part of the game is still at the core of its current incarnation, The Nightmare Princess: Make traps and kill people with them.

Flash forward to the future. The year: 2015! We now have flying cars, robot butlers and Deception IV: The Nightmare Princess, the first in the series debuting on a next-gen console. The Nightmare princess is an expansion pack to Deception IV: Blood Ties, so this time around you get to play as Valgyrie, a new maiden with the ability to inflict extra damage by stomping on the enemies after they fall into your traps. Boobie traps are the best part and main focal point in the series, which emphasizes the sheer thrill of carefully placing traps using a map-like grid of your surroundings and luring your enemies into them. I love the fact that enemies wont enter the room until you have all your traps set, making your game more of a performance where the results are based on your strategy of trap-placing. If you set them right, you can pull off a beautiful string of mayhem and carnage. From what I played, you have the ability to lay a variety of traps, all of which can be triggered one at a time or in succession to pull off a combo. For instance, you could place a bear trap that triggers a pendulum that knocks the player onto a spring-boarded, spiked plank that catapults them to where a giant bolder will fall onto them. Or you can take a less murder-y route by having a pumpkin fall onto their head, humiliating them.

If any of this is sounding familiar (as it did to me when I first played Nightmare Princess), there was a similar game that came out in 1998 that I also played on the PlayStation known as Deathtrap Dungeon. Looking back at it now, it was Deathtrap Dungeon that shamelessly copied off of Tecmo’s Deception. Using the same game mechanics and trap-laying system, the game was almost identical. I happened to like Deathtrap Dungeon more, but then again, I was a young guy going through the throws of puberty and that game allowed you to play as a well-endowed, murderous woman.

Deception IV: The Nightmare princess is fun but also a changeling game, definitely one where you don’t want to skip through the tutorial of controls. The control scheme isn’t that hard to master, but it’s one that is rarely used in games. Once you get over that (slight) hurdle, the game is almost impossible to put down. The graphics for the game are good, not great, with decent HD graphics. It had no bugs or frame rate issues from what I played, and the AI path has no problems whatsoever, making the traps all the more fun. The soundtrack is also great at creating a dark and creepy atmosphere. So, if the idea of setting traps and having unsuspecting victims walk into them, then Deception IV: The Nightmare Princess is the game for you.