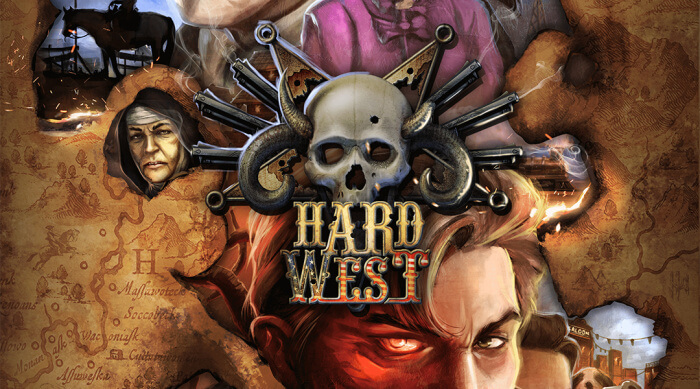 Hard West opens with a sepia-toned corpse hanging from a tree in the middle of a lonesome desert—an appropriate way to kick off a game that tells a story of tragedy, betrayal and the true nature of evil. Indeed, it’s the game’s engaging genre mashup of spaghetti westerns and paranormal horror that brings the player along for some exciting turn-based combat.

The storyline follows a family that is seemingly cursed with bad luck, which leads to increasingly bad decisions regarding mysterious strangers and deals that are too good to be true. After playing through a tutorial mission that works its way nicely into the main story, the player controls the fate of this family as they obtain a mining license and try to strike it rich through digging for gold. This part of the game has a nice simulation feel to it—the player can navigate to different areas on a dusty map in an effort to mine as much gold as possible. The meat of Hard West’s storyline plays out in this simulation mode, told with some gravelly voice-over work and tense dialogue. It’s also a sly introduction to Hard West’s fixation on risk vs. reward, since players can invest more money for more complicated mining and stand to gain or lose money.

Risk and reward are also heavily involved in Hard West’s combat scenarios. Sure, it’s easy to draw comparisons between Hard West and XCOM: Enemy Unknown—as both games feature squads that can be ordered around on a grid-based level and are a bit punishing when a squad member dies—but Hard West has added some little tweaks that make turn-based combat unique. First of all, Hard West gives players the ability to complete stealth missions in some scenarios. With stealth missions, each squad member gets one action point for movement, but if they’re close enough to an enemy, they can use a subdue ability to take the bad guy out of the picture for a few turns. During combat, each player has a luck meter that depletes every time someone takes a shot at them and misses—the upside is that it refills every time your squad member misses a shot. While turn-based combat is defined by chance-to-hit percentages, this luck variable makes taking a gamble much more interesting.

Rifles, pistols and shotguns are the workhorses of Hard West’s combat, and each squad member has different gunslinging abilities that they bring to the fight. However, it’s when the game’s paranormal side kicks in that things get really interesting. There’s nothing quite like seeing a member of your squad ignite with demonic fire as they fan their Colt .45, filling an enemy with lead. Squad abilities can also be magnified with Hard West’s unique card-based upgrade tree. After every encounter, the team gets a face card which can be added to grant skills like life regeneration or buffs to a character’s aim. Poker suits can be combined to increase these bonuses, so Hard West players have a big incentive to complete as many side quests and bonus objectives as possible.

In order to best capture the hellish frontier of Hard West, the game employs cel-shaded graphics that lend a comic book-like feel to the game. At first, I thought this was an odd choice. The more Hard West immersed me in its story, however, the more I understood this artistic decision. It lends a surreal, dreamlike quality to the game which only adds to the characters’ individual battles with madness and grief. There’s a waking nightmare quality to Hard West, and the graphics make the action unfold as if we were seeing it on yellowed film spinning through an ancient 16mm camera.

Doom and gloom are omnipresent in Hard West. Every decision has a dark side, and every risk costs a bit of the player’s soul. It’s a well-executed game that subtly bends multiple genres into a haunting gameplay experience.