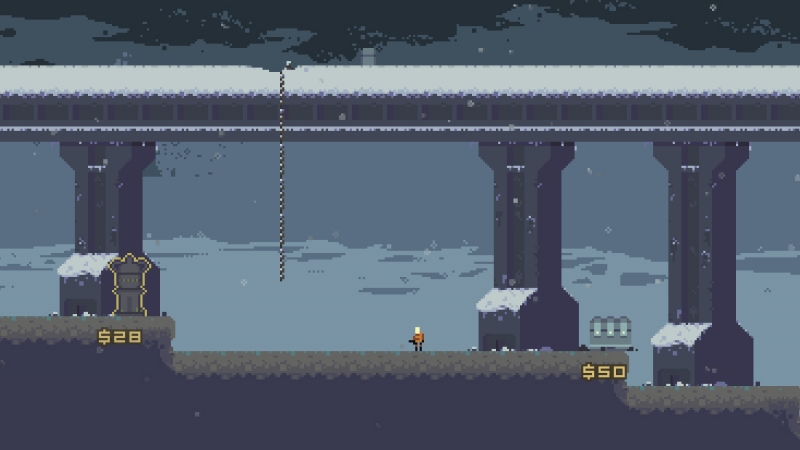 Risk of Rain’s desolate planetscapes are almost peaceful… if you forget about the hordes of angry aliens out to get you. Image courtesy of Risk of Rain
The Indiebox has arrived in style and sophistication. Similar to other subscription boxes like Loot Crate and Arcade Block, Indiebox launched their first gift last May to great success and positive feedback. This package highlights those independent developers whose games are fan favorites, but usually don’t have any physical distribution. Indiebox gives you that physical copy, and plenty of clever surprises. I was super excited when I opened my first Indiebox filled with Risk of Rain swag.
Hopoo Games began with Duncan Drummond and Paul Morse making the first version of Risk of Rain during their time at the University of Washington. After depleting their college’s funding, they geared up Risk of Rain and took their project to Kickstarter seeking $7,000 to improve their game design. They eventually received over $30,000 in funding, so after two years, we now have a special edition Indiebox. It’s pretty rad to see how developers can be supported amidst all the other negativity online. The game itself is absolutely worth owning, and this box just boosted my playing experience. Risk of Rain, a roguelike action RPG, builds off its predecessors with exceptional results. Play with either the keyboard or a controller—I prefer the former—and explore an intimidating world with a wide array of characters. The simplicity makes the game; you’re a tiny speck compared to the rest of the massive screen, which allows there to be beauty in special effects like waterfalls, fire and tons of really annoying jellyfish. It’s a game that’s not built in your favor, so you’ve gotta prepare yourself for your eventual—and repeated—demise.
Now, let’s break down what a gift this really was. Sending out monthly subscriptions is such a simple concept that has worked its way into many facets of our lives. The pitch is almost irresistible because, for $19.99 plus shipping, you receive so much more than you would by buying the game alone. The box is individually designed for each game, and well done at that. There’s something inherently special in seeing that you’re one of 1,500 gamers with these treasures.
What’s in the box? First there’s a little note with a Steam code and, since it was for February, they threw in another code so you can play with a special someone. There’s certainly a lot of love that goes into these, which is evident by the sheer variety of goodies. I dumped them all out in front of me like a greedy kid on Christmas morning while I started downloading the game. What a Christmas: A bright orange pair of very comfortable socks, an awesome Captain’s brooch pin, one sleek black and white sticker, one Indiebox sticker with little characters hidden in the font, a CD of the soundtrack done by Chris Christodoulou, a full color instruction manual filled with meticulous notes on every creature and item in the game, a clear cassette case with a mysterious key card inside and, my favorite, a small hardbound black notebook that resembles a tiny ruled Moleskin journal. Each page has flavor text of all the monsters and other characters. It delights me to no end that these easter eggs are so well crafted with astounding attention to detail. The exquisite pin and the keycard are the highlights, as the former provides a significant morale boost and the latter is in fact a USB containing another copy of the game, allowing you to play it without Internet access.
Overall, it feels like this package was filled with deliberate sense of intensity. We’re stranded on this strange planet and these are our tools as players. It encourages you to write things down (I can’t be sad that a pen wasn’t included, right?), get into character by wearing the brooch and listen to the music even outside of gameplay. Risk of Rain is an excellent game and the Indiebox captured so much of the ambiance—it was the whole package and more.
Indiebox has released consistently great games including “Teslagrad,” “Brütal Legend,” “Escape Goat 2” and “Rogue Legacy,” so their track record for the past year is golden. Unlike the loosely related items found in Loot Crates, everything here is crafted with real respect for the game, the player and the developer. These treasure chests can only get better and more complex as popularity expands without losing the quality. It’s an easy introduction to new indie titles, so if you need a new addiction and more cool things, start a subscription now.
Photos: