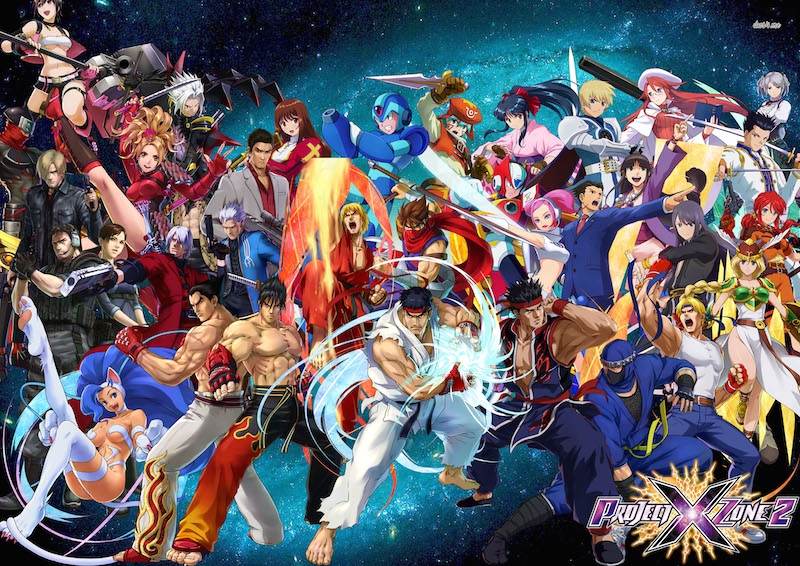 Project X Zone 2 is the love child of Bandai Namco, Capcom and Sega, and it features all of your favorite characters from various animes and JRPGs. It’s also the sequel to Project X Zone. Tales of Vesperia, .hack//, Resident Evil, Sakura Wars, Streets of Rage, Yakuza: Dark Souls, Street Fighter, Tekken, Fire Emblem, Megaman and even Sonic the Hedgehog characters make appearances in Project X Zone 2, and that’s not even all of them. This has easily got to be one of the best examples of fan service I’ve ever seen, and I’m not necessarily complaining. I mean, I never thought I’d see Sonic and Knuckles kicking some ass next to Phoenix Wright and Ryu from Street Fighter. If you’re really into Japanese RPGs, obscure anime series and crossovers, then Project X Zone 2 is the game for you. The storyline is simple: Trans-dimensional beings are crossing over to your world through a series of portals randomly placed throughout the now abandoned city of Tokyo. It is your job to rid the city of these beings and close the portals for good. The artwork in this game is beautiful, and the pixelated graphics that accompany it (during gameplay) make me feel nostalgic.

Project X Zone 2 really only fits into the JRPG genre of gaming, so if you’ve never played a JRPG, prepare for a little culture shock. If you’re not new to the world of JRPGs, then you’ll enjoy a traditional, tactical, battle-based strategy game. The battle mechanics are pretty simple to use. The only complaint I had is that the attack/defense menu is on the bottom touch screen. So while you’re deciding if you want to attack/defend/counter, you also need to remember to touch the option on the menu screen below before pressing the A button to finish your turn. If you accidentally forget this step, there’s a very real chance that you’ll end up skipping your turn. However, considering that you literally do this a billion times in the game, you’ll get used to it—I just don’t think it was the best layout they could have gone with.

The narrative in Project X Zone 2 is unintentionally hilarious and obnoxious at the same time. There’s a lot of slightly sexual comments that definitely got lost in translation. The obnoxious part comes in later during the game when you’ve gathered up a large group of characters and each character just has to say something during the dialogue cut scene, every single time. This means that you’re button-mashing the A button like crazy while trying to skip all these ridiculous, two-word dialogue boxes while missing the instructions to the next part of the game. If each individual character isn’t attempting to finish the last character’s sentence, they’re just repeating what they said in a slightly different way. It’s like being at a house party with really loud music while trying to hold a conversation with your group of friends, but everyone keeps yelling over each other and nobody is actually hearing what anyone is saying.

But, if you can get past the silly narrative, you really will enjoy wandering around abandoned Tokyo and fighting bad guys. Luckily, since all of these beloved anime and video game characters are having to fight over screen time, it makes the turns go by quickly so that each enemy encounter doesn’t take a solid 10 minutes and you can progress through the game at a good pace. Each character has its own set of attacks and counters that are reminiscent of their respective video game or television series, which makes it impossible for the battle encounters to be repetitive, since there are so many characters to choose from and ways to K.O. your enemy. The large selection of characters is also Project X Zone 2’s downfall. Once you get four or five characters from your team fighting against three or four enemies, the screen just becomes a clusterfuck of chaos and explosions. It looks super cool, but some of the time, I’m not really sure what’s going on until the “K.O” banner flashes across the screen. Who cares, though? It’s still pretty—so pretty.

At the end of the day, Project X Zone 2 really only appeals to a certain niche of people. There are a lot of inside references and jokes from the many anime and video games franchises that are included in the game, but it’s not necessary to understand all the references to fully grasp the story of this specific game and enjoy it. I can fully admit that I enjoyed this game purely for its fan service, since I loved a lot of the franchises and characters featured in Project X Zone 2. As someone who has experience playing JRPGs like Tears to Tiara and the Final Fantasy series, I can really appreciate this dumbed-down JRPG for its simplicity. –Nicole Stephenson