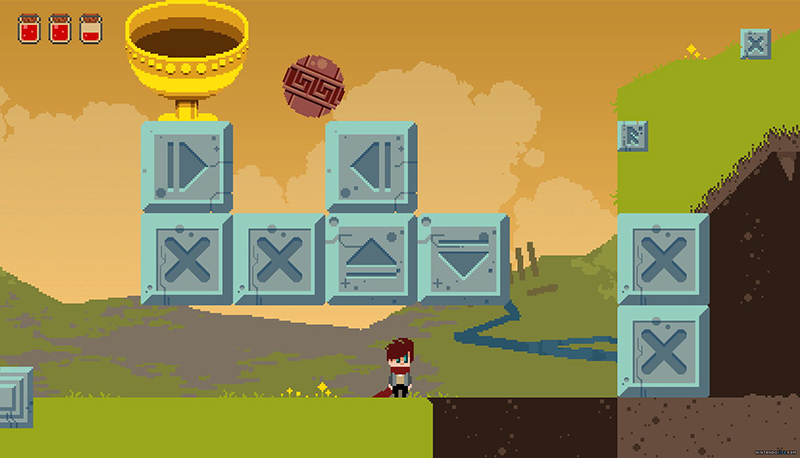 I had hopes for Actos Games’ psyscrolr because it was pitched to me as an indie horror platformer for the Wii U that mainly uses the touchpad, which all sounds great. However, it was a huge disappointment. The premise is simple: You’re a Scrolr, a boy who receives special psychic powers from some strange thing from another world, and it’s your mission to do … something. Mostly, it’s to test the limit of these new, ominous powers while traveling through a dark world, but players are never given a reason why, and it never ends up as something important. It’s like a doughnut infested with ants –– there was potential, but now it’s horrifying and not in the way it was intended. You’re a tiny, pixelated Doctor Who-mashup sprite that is frustrating to control, since the Wii U gamepad scheme is uncomfortably set. You’ve got to use the L button to jump and tap the screen to throw ambiguous objects at enemies that are basically Evil Dead 2 reject trees, and often, the physics of the game betray your every movement. There are three hubs, and each one gets worse and worse—it feels rushed, which ultimately makes the entire game insufferable. The worst part about the game is the narrator dude, who sounds like the master in that ’90s Nightmare board game and tells you exactly what to do every step of the way, repeating each phrase a million times. It’s a new level of hellish annoyance and completely unsatisfying repetition. Maybe diving into the second layer of the Inferno is the real horror of the game. Overall, Actos Games gave us a potentially good game, but released it so bugged that it was unplayable. All new start ups out there, you’re doing the good work, but: for everyone’s sake, please don’t rush it. Maybe the DLC will help give an actual story and clean it up, but I’m far from caring. –Taylor Hoffman