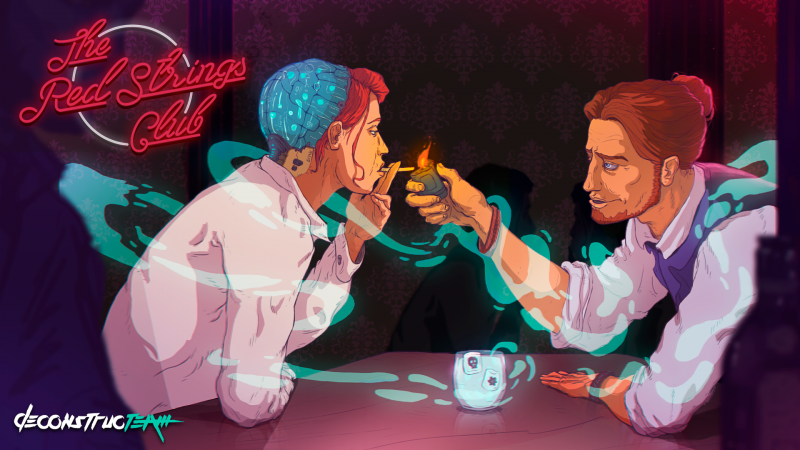 Courtesy of Deconstructeam and Devolver Digital

As The Red Strings Club begins, you see a rainy cityscape reflected off a skyscraper. It’s tranquil, foreboding. “Click to Start,” it flashes on screen. Suddenly someone falls down into frame, tumbling to his death. “I wonder when it was that my fate was sealed,” he says to himself. “Never imagined my death would be so epic.” The city cascades around him—as though he weren’t falling but floating against the night, its litany of bright billboards and apartment buildings. We don’t know why Brandeis is falling to his death, but as he asks, “Hey… are you listening, Donovan?” The title card rushes us with thunder. It’s a hell of a way to start a game, especially one that makes such sound use of the cyberpunk motif. Red Strings Club is a game that tugs at your philosophical leanings, asking grand and granular questions that it demands you answer. But most importantly, Red Strings weaves a familiar paranoia using the root of cyberpunk: that corporations increasingly own our well-being, and, to a large extent, we’ve come to like it.

I love cyberpunk but am skeptical of most authors’ ability to harness the politics the genre was born to critique. Cyberpunk has a history (especially in games) of being politically neutered for its aesthetics. The neon, the constant night, the smokey interiors, the technological advancements—none of these trappings can be rightly stripped from the context creating them. In proper form, Red Strings is all about existing in a society where powerful technology is street level, iPhones and apps a precursor to implants and neural augmentations: the new norm. The disconnect between us grows out of the true lack of power we have over ourselves. Truly cyberpunk stories romanticize the city not for its flying cars but for its crevices of hope in this struggle.

After the title card, Red Strings cuts to the interior of the club, where Brandeis plays calming piano and Donovan, his boyfriend, mixes the best drinks in the city. You’ll play as both—Brandeis is an implanted hacker, and Donovan is an implantless information broker. Red Strings Club has a surprisingly varied narrative structure that makes it hard to discuss, especially at only about four hours long. The main themes of its narrative—of fate, health, control, duality etc.—come through as a slightly complicated narrative, but one that has just enough hooks to keep you grounded into the ride. As the game starts, an Akara android stumbles into the empty bar, damaged and near death, and the scene starts to set. Donovan tells Brandeis he’s heard of Akara androids, a new model developed by megacorporation Supercontinent Ltd and meant only for internal use. “Rumors say this is the first android capable of making ethical decisions,” Donovan says, “examining every single factor in play in the life of any subject.”

So what’s the Akara android doing at The Red Strings? Brandeis plugs into its memories and the player assumes the Akara, named Akara-184. Supercontinent has created it and given one directive: Install human upgrades to make them happy. Make humans happy. You do this by creating and installing upgrade modules into humans who have consented and paid for the simple surgery (the cost of which has been suspiciously reduced by Supercontinent). As humans shuffle through on a rack like a dry cleaner’s, you can read their file, consult a wiki for available patterns of upgrade modules, then install them into the human once you’ve crafted them using a lathe. Yes, like for pottery. You rapidly click the mouse to spin the wheel, choose a shape of carving tool to carve a gelatinous little cube into a template shape. Each resulting shape changes something about a person in some specific way. Unequivocally, this rules. It is so relaxing. I made one of each module (you only have to make one once before you can use it as many times as you want) despite not using them all just because it was so relaxing. Clicking the mouse and moving it deftly to carve is like an intuitive “pat your tummy, rub your head” situation: It feels right, and I would probably play a whole game around it. Also, each of the upgrades are intriguing: “The Enchantress” is a vase-like cone with a high indent, and it increases your online social network charisma; “The Vizier” highly enhances your persuasion skills.

My first human came through and I read their file: Camdyn LaShawn, 21. A cosplayer with a simple request: “No matter what I do I can’t raise my follower count. Please, help me!” Immediately I thought to use The Enchantress, bump up those followers easy. But there was another option. “The Temple.” Eliminates the need for social acceptance. Give her followers or squash the desire. It’s an early choice that’s simple but interesting. Do I give her the validation or take away the craving? Red Strings is good at putting you at war with yourself. You will find one thing repulsive but find difficulty with the alternative.

Another significant mechanic is Donovan’s bartending. Each person who comes through the bar has certain “Soul Disks” that the player can see. Each represents not just an emotion but core parts of themselves they may be feeling at the moment. By mixing certain liquors together, the player can move a central disk and make a drink just for that person. “It’s all about matching their vibes and allowing them to savour, mourn or contemplate their souls’ fundamental sentiments,” Donovan says. (This also has an amazing pouring mechanic that deserves a whole game around it.) This allows you to steer conversations in different ways to get different information, but doing so may require you to exploit someone’s difficulties, like anxiety or paranoia. At the same time, you can usually help someone channel their pride or their creativity. You balance what you want out of someone with what you’re willing to do to them.

As you exploit people for information, you learn more about Supercontinent’s plan, and according to your decisions, the red strings will weave through different scenarios: You’ll talk someone off a bridge, decide whether to drug somebody, make sick pottery. Whenever you finish an interaction with somebody, Akara-184 (who joins you to help at the bar) will quiz you on how you think your last interaction went, asking questions from, “Is she physically attracted to you?” to, “Did she lie to you during your conversation?” Red Strings goes places that force you to confront your sense of what’s occurring, even your own hypocrisy. At one point, the possibility of eliminating all depression is on the table. Do you do away with deep sadness? Do you worry about people losing individuality? What if you only let people be depressed for one month? These are questions the game lets you answer, but it forces you to reckon with the reality.

There is an instance of transphobia in the game that is, granted, purposeful by the creators. One character uses the deadname of another character as a password to his own computer. When I realized this, I found it transphobic, but I realized I found it to be the character’s transphobia rather than the game’s. fingerspit, who did the game’s soundtrack, tweeted, “Being transgender in our game’s narrative is as normalized as being agender, gay, lesbian, bisexual… which are also identities represented in the game.” And it’s true—the game is quite diverse and treats this diversity with a normality that feels natural. As a trans person, I think this is worth pointing out as an example of how to portray the realities of certain identities without reifying those realities again.

Day to day I know where I stand on the things that are important to me. It’s the larger issues of the 21st century that make me anxious. The information age, the era of interpretation—we feel like teacups expected to take the firehose. It’s scary. The Red Strings Club plays with fate and cyberpunk politics, but in its best moments the game simply heightens cyberpunk’s most pragmatic anxieties about the underbelly of the connected life: What’s controlled and who controls—those could be questions we never escape asking. The Red Strings Club is available on PC through Steam or Humble for $14.99. –Parker Scott Mortensen