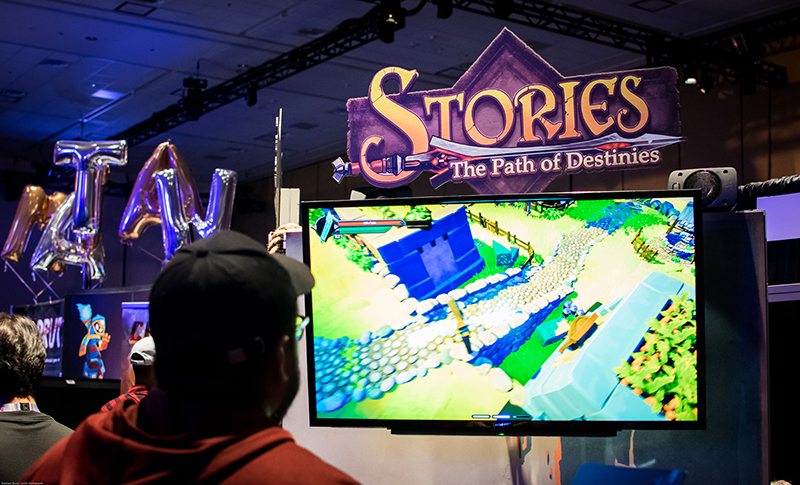 Preview: Stories: The Path of Destinies

Stories: The Path of Destinies

Stories: The Path of Destinies follows Reynardo, a roguish fox caught up in an uprising against some crazy despot in a gorgeously illustrated world. The wry narrator provides excellent commentary throughout Reynardo’s adventures, highlighting Stories’ tongue-in-cheek observation on traditional storybook tropes, like the convoluted logic behind naming weapons, or the narcissistic personality of would-be heroes.

Each chapter poses two straightforward choices for our hero, often lacking any sense of moral ambiguity: Save your friend because you have an honorable heart, or grab a component for an epic war machine to shift victory that much closer to your grasp. The scenery suits the decisions you make, where the more noble pursuit offers a vibrant, cheerful backdrop while the search for a legendary blade leads Reynardo into a damp dungeon set to an eerie soundtrack. One of the underlying themes I noticed was the pitfall of utilitarianism. Will the ends you hope to secure truly justify the actions taken along the way? Malik Boukhira, co-founder of Spearhead Games, explained during my playthrough that, unlike similar games which provide branching paths based on binary decisions, the choices you make in Stories will fork off in completely separate directions and, ultimately, different endings—adding many more hours of replayability.

Stories’ combat, referred to as “Sword Fu,” meets at an intersection of typical action-RPG “hack n’ slash” with the visceral impact from something like Rocksteady Studios’ Batman: Arkham series. Every slice in a foe has gravity to it, making the fights more engaging than the more mindless spam grind in Diablo III (excluding, perhaps, the later difficulty modes). I love playing Diablo for that type of blind blood-spilling, but Stories plucks on my tactician heartstrings. I look forward to seeing Stories: The Path of Destinies fulfill its potential as the next great action-RPG early next year on PS4.