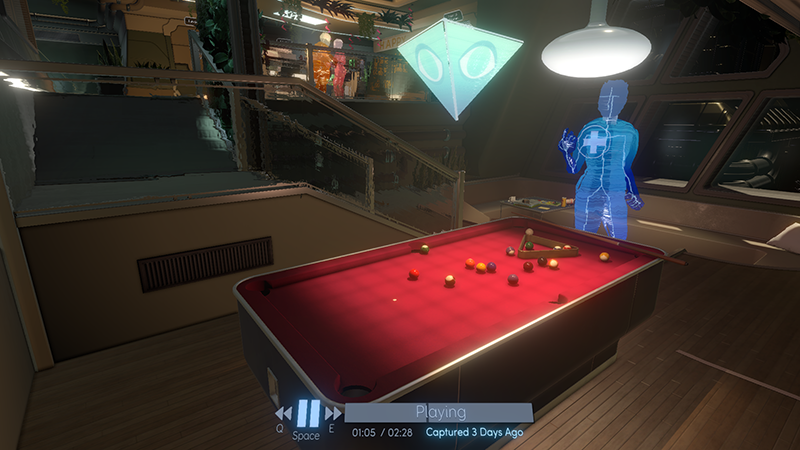 Image courtesy of Tacoma and Fullbright

In 2003, the theatre company Punchdrunk performed its first iteration of Sleep No More in London. The company reimagined Macbeth in a way that would shed one of the fundamentals of stage theatre: the stage. The audience was free to explore the performance from within the scene as masked, silent observers. Certain scenes would play concurrently, and together with environmental details like books, journals, letters, trinkets and set dressing, nearly everything competed for the audience member’s attention. It was disruptive and intimate, highlighting the immediacy of performance art. Since then, Punchdrunk has opened the show again in an ongoing production in New York City, but for most of us, it’s a theatre experience we may only read and wonder about. Thankfully, Tacoma mines this theatre experiment for its core concept of exploring performance, and the result is an engaging drama that percolates at a unique intersection of mediums and disciplines.

Tacoma is indie studio Fullbright’s followup to their 2013 debut game, Gone Home, which almost single-handedly legitimized the genre of first-person exploration. The genre is broadly defined as first-person experiences carrying heavy emphasis on story, atmosphere, exploration and, sometimes, puzzles. Also known as the more pejorative “walking simulators,” games like these languished in something of an illegitimacy before Gone Home proved that, given the time and resources, a game about wandering around an old Oregon home while your family was away in the ’90s could be just as compelling as narrative behemoths like Uncharted. Picking up old VHS recordings of X-Files reruns and looking at your father’s shampoo bottles was actually affecting, and so the genre found new life in small, detail-oriented worlds.

What Gone Home refined more than it introduced was the audio diary. Finding specific objects triggered minutes-long spoken word audio diaries from your younger sister, the game’s main character, where she would recant a story or thought relevant to the object. Gone Home had found a way to make audio diaries, a tired crutch of game narratives, into an actually effective tool.

What Gone Home did for audio diaries, Tacoma does for cutscenes. At least, a type of cutscene. Tacoma works like a Sleep No More–style theatre show where you can freely explore scenes but also have the ability to pause, rewind and fast-forward, giving you complete control. The player arrives at Tacoma as Amy Ferrier, tasked with downloading the ship’s AI core and nothing else. All you know is that the crew was evacuated shortly before you were contracted. Each crew member’s voice and physical movement was captured by the station’s augmented reality recording system (a contractual obligation for Venturis workers, the owner of Tacoma station), and so while no part of Amy’s Tacoma job includes watching the machinations of a small crew confronting evacuation, nothing physically stops her (or you) from recovering scraps of this AR data and watching the drama play out.

Though you can still pick up objects and examine them for details about Tacoma’s crew à la Gone Home, the bulk of the gameplay lies in simply moving through these scenes as they play out. While some of the interactivity lies in the rewind/pause/fast-forward feature, it’s the natural tendency to constantly reframe interactions through the lens of the player that feels generative. I often felt like I was adding to the emotional depth of a scene by deciding where to position myself within it.

There can be any number of the six crewmember specialists in every scene, so each sequence is dense with character interaction, development and general worldbuilding all worth rewinding to follow. The crew each have specific duties, and these bleed into how they interact with one another. Natali Kuroshenko, the network specialist, often opines how ridiculous it is that Venturis limits her ability to interact with the AI core’s networking functions. Tacoma’s station director, E.V. St. James, can be found in some scenes practicing her speech for the crew’s yearly performance review. And medic Sareh Hasmedi is usually deep in conversation with the station’s AI, named ODIN.

The story revolves around the crew’s relationship to one another as ODIN informs them that a meteor storm has disabled both communications and oxygen to Tacoma. In over about two hours, the game’s tension mounts steadily as the crew come to terms with reality and formulate a plan, pushing the relationships that have been brewing on the station for the last year to a head. Botanist Andrew Dagyab prepares for the possibility that his son may grow up without the college education he was planning to provide through his work. E.V. and Clive Siddiqi, the operations specialist, cement an uneasy and surprising relationship of mutual trust. Natali and Roberta “Bert” Williams (mechanic) fall deeply in love. Tacoma shines because these performances, though not motion captured, are superbly voice acted. One moment Sareh coolly comforts Andrew and immediately breaks down in panic to ODIN the next, attempting to calm herself through mantra and ODIN’s guidance. The cast is diverse in background and thought, and though every character is represented by only color and an indefinite body shape in AR, each person feels completely distinct in ways beyond their ghostly AR recordings. Everyone’s personal quarters are littered with notes and details only they would leave, and some recordings from several months back remain in fragments. The ship is alive and completely empty, and the experience of splicing yourself into the recordings can feel almost as alienating as it can connecting. As some scenes playback, you remind yourself you will never truly meet any of these deep, rich characters, and that fact feels truer than in most works of fiction.

Built on the notion of using technology to fully explore a scene, Tacoma successfully plays with the intersection of theatre, interactivity and visual and set design. It’s bizarrely cross-media. So many disciplines go into storytelling tuned this tight and made this detailed. For any weaknesses—a somewhat short length, a strange pace, a mostly linear narrative—its unique storytelling and raw strength as fiction outshine them all. Explore Tacoma on Steam, Xbox One, Itch.io and GOG.com for $19.99. –Parker Scott Mortensen