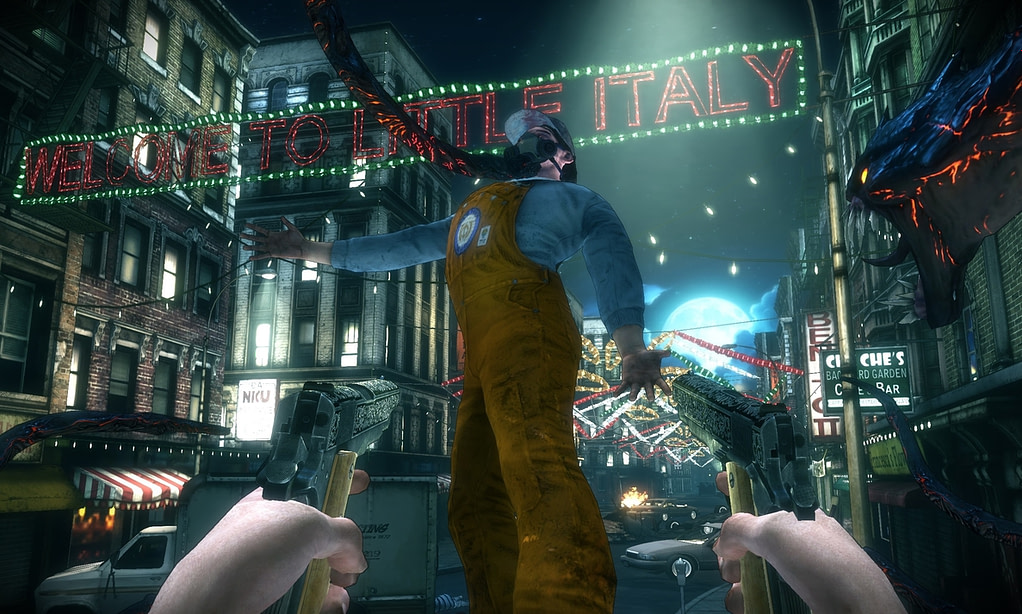 Life must be tough in the world of first person shooter video games. Sure you can get shot about ten times every five minutes and still live, but obstacles as enormous as beer bottles can block your path and force you to reroute. Shooting 20 or so bad guys at a time is commonplace, but something like turning around or jumping is sometimes impossible. The Darkness, although severely suffering from some of these same problems that haunt most fps games, does deliver a fairly unique experience in this very crowded genre. I was really excited about this game, a mixture of a modern shooter and horror twisted together inside a good old-fashioned mob story wrapper. As good as the action is, and as sweet as the graphics are, the Darkness has an unfinished feeling that made completing the game more of a chore than a satisfying accomplishment. Most of the game is in a city with a few chapters spent in hell. You’ll also spend a fair amount of time watching lame cut-scenes during load times, which can also be like hell. In the city you travel by subway and you’ll notice that the same 15 people are always in the subway station and in the same spot. Considering how much time you spend in the subway station this only adds to the unfinished feeling that haunts the Darkness. Although the demonic powers granted to you during the game are fun to play around with, the action seems a bit too sparse as the story wears on. More than half of the game is open-ended, however some of the missions you complete are only available during one part of the game, which is fine unless you’re expected to find hidden items in these places. Although the Darkness has it’s moments, it fails to deliver the action of a great shooter, or the spook of a decent horror game; it seems the Darkness tries too hard to be a little of both. 3 out of 5 devoured hearts.