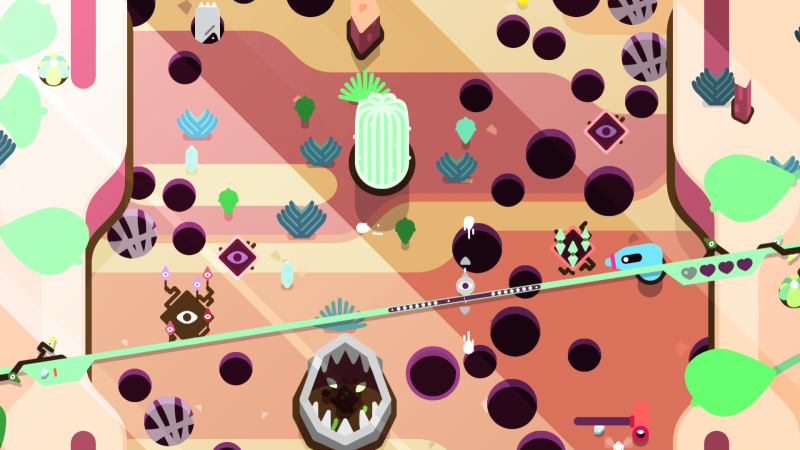 I’m really bad at TumbleSeed, and so for a long time, I didn’t like it. I died all the time. My brain would panic and I’d roll myself into hole after hole, or I’d forget to checkpoint and lose a whole run. It was frustrating, and so my first instinct was that TumbleSeed is simply a Hard Game and you have to be Good At Video Games to enjoy it. It’s a run-based roguelike that has no problem shucking your progress in a moment, even for its genre. You play a small, rolly seed from a forest of seedlings who must ascend a mountain. Rather than control your seed directly you control a single platform anchored on each side of the screen—the left stick controls the position of the left side of the platform, and the right, the right. Indirectly, you roll your seed back and forth to avoid obstacles that are randomly generated. Oh, and holes. Mostly holes.

You fall into a lot of holes in TumbleSeed. My guide on the River Styx will hear so much about holes. These voids in space come in all sizes and are the game’s chief obstacle. Because they’re randomly generated, the terrain they create can be incredibly porous. The publisher, aeiowu, calls Tumble a “rolly-roguelike,” and so with their admission of it being a roguelike, I instantly think of it in the context of Spelunky, the seminal roguelike any of its fans would comfortably call perfect. And it’s a favorable comparison. Like Spelunky, the beginning area of TumbleSeed can take you hours before you learn to reliably advance to the next section. The difficulty is high from the get-go because unlike a Spelunky, the gameplay is not about discovering an emergent variety of threats. Most dangers are clear and easy to learn and anticipate as they appear. Instead, TumbleSeed’s difficulty comes from having an incredibly responsive core mechanic in its controls. Once I realized that was the case, the thing finally clicked for me—when I slowed down and took the game at a zen pace, I realized, holy shit, this is really good.

Most roguelikes are built from pieces of games we know inside and out. Spelunky is a platformer at its core. FTL is a strategy game. Even the genre-defining Rogue was a dungeon crawler. By comparison, TumbleSeed is grounded in almost completely unfamiliar mechanics, and its more traditional roguelike tropes can obscure what TumbleSeed does well. Structurally, it’s just so familiar—there are crystals you collect and expend for powerups. There are different enemies with emergent behavior. There’s a daily challenge. It looks like something you know, but it doesn’t feel like it.

TumbleSeed is more like roguelike yoga. It requires concentration on slight movement and deliberate maneuvers. It is so easy to roll carelessly into the void, and when I picked up Tumble, I actually expected the rolling mechanics to feel more intuitive than they are. (In fact, I thought there’d be motion controls for tilting back and forth. Playing it on the Nintendo Switch, it just seemed natural.) But when I stopped and paid closer attention to how my movement affected the seed, easing myself up the mountain one bit at a time, the more I realized I could feel in tune with obstacles that once seemed frustrating or risky. That may sound simple and maybe a little obvious. Did I mention there are holes everywhere?

You need restraint to find the granular sort of challenge TumbleSeed offers, and that takes some patience. Its biggest problem is that the roguelike genre’s aesthetic trappings tend to conceal the peaceful, crawling maze that it is. Despite its ability to frustrate, the game can be cathartic in even its simplest moments. I’m still really bad at it. I still die all the time, but that hasn’t stopped me from coming back to experience the maze of movement, the trance of the rolling seed. And those fucking holes. –Parker Scott Mortensen