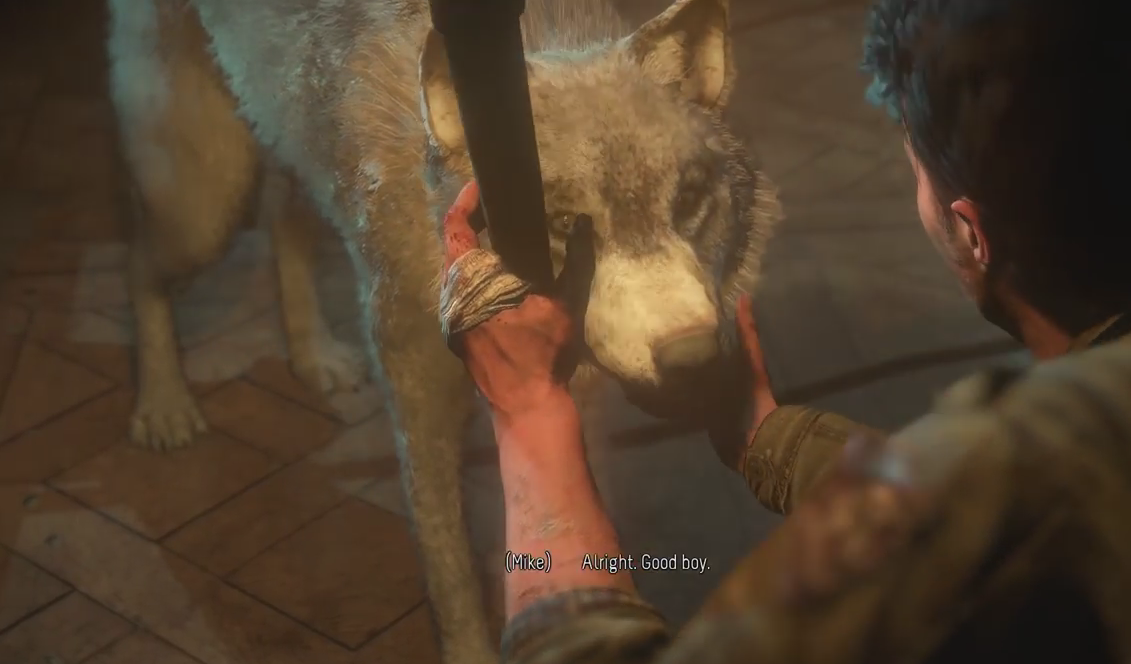 Warning: Since Until Dawn is a story-heavy game, it bears mentioning that this review will contain minor spoilers. If you’re worried about that, go and buy the game. It’s worth your money. The rest of you, read on.

Oh man. Distilling all of my feelings about Until Dawn is gonna be tough. It combines so many things that I love: games, campy slasher flicks, dogs, and loose interpretations of Native American folklore. This game puts the whole “I would totally survive in a horror movie” mentality to the test. You can end the game with all of the eight playable characters surviving, or none, or any number in between. All of their fates are determined by the choices you make as you play the game.

This game is everything that Quantic Dream games have tried to be over the past console generation, taking the format of an interactive movie but still retaining enough elements of gameplay to not make things seem stilted or railroaded. Each of the characters is fully realized and has their own unique personalities, and while some invoke tropes to play into the nature of the genre, none of their reactions felt unreal. The writing in the game is beautifully campy and filled with golden little moments of wit. When I started my second playthrough of the game with my friends, I described the game’s script as, “Joss Whedon, but without the sexism.” The game is wonderfully self-aware of the films that it’s trying to emulate (each of the achievement titles is a play on a famous horror movie), and uses this knowledge to keep players on their toes. Nothing on the mountain lodge where the majority of the game’s action happens is as it seems, and while the game never strays into the realm of metafiction, there are quite a few brilliant twists along the way.

The story begins with a classic horror movie setup. The eight main characters are all teenagers who plan a yearly getaway to the winter home of one their parents, nestled high in the mountains. The catch this year is that the year prior, two of their friends disappeared while on the mountain, marking this as the anniversary of the tragedy. This isolated lodge is also located at convenient walking distance from a set of abandoned mines and an abandoned sanatorium, all of which happen to be located on former First Nation land. With a setup that practically screams “You’re all gonna die, you idiots,” we begin the 12-hour journey to sunrise, and almost immediately things take a turn for the worse. Most of the characters get split off into groups of two, while the rest fly solo as they try to uncover the mysteries of the night.

Gameplay usually amounts to making decisions regarding action and dialogue, as well as scattered quicktime events and investigation portions where you walk around and collect clues. Some of my favorite moments made use of the creative “Don’t Move” quicktime event, forcing you to hold the controller absolutely still until danger had passed, a task easier said than done. The game keeps track of the consequences of major decisions in a little menu tab titled “The Butterfly Effect,” letting you see the outcome of your choices, but even the smallest choice changes how action plays out. Nearly every single action you take will alter your relationship with other characters and change your own attributes. Clues that you collect are all kept in one menu screen, and when you find information that would link clues together, they update automatically, letting you keep track of how close you are to finally putting it all together. There are a staggering amount of collectibles, some unimportant and others vital to preventing character death. One of the more brilliant design decisions was mapping the pause button to the trigger buttons, as jump scares are common and my heart is a frail and easily startled thing.

I ended my first playthrough with three of the eight protagonists dead, and managed to cut the number down to one on my second go. Even if you don’t play many video games, if you’re a horror fan, you owe it to yourself to at the very least look up a playthrough of the game online. Be sure to make the choices that let you keep the wolf alive. Nothing’s sadder than a dead animal.