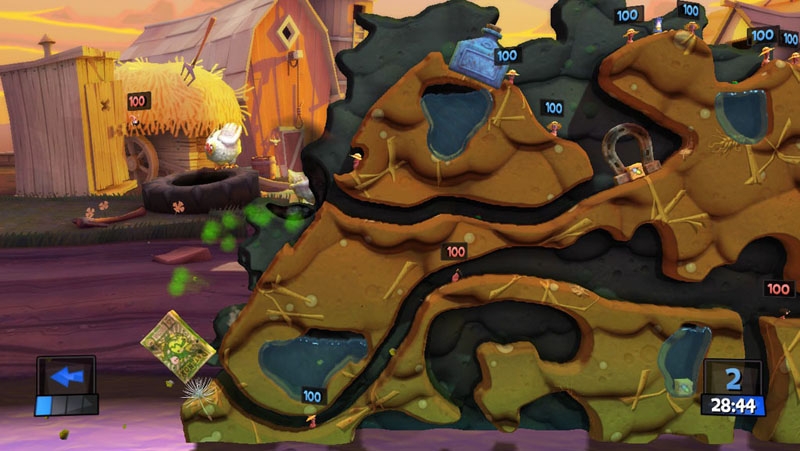 Worms Revolution
Team17
Reviewed on: Xbox 360
Also on: PS3, PC
Street: 10.10
Nothing quite gets the nerd mojo going like turn-based strategy and exploding sheep. The Worms franchise is known for combining both, and a new installment has arrived via Steam, Xbox Live and Playstation Network. Though players will appreciate the trip down memory lane, they will also remember how certain games just don’t age as well as we’d like them to. For the uninitiated, Worms puts the player in control of a small platoon of tiny earthworms possesseing a large arsenal of weapons and accessories. The player’s platoon is pitted against a rival platoon, and the two take turns using bombs and guns to destroy one another. Each turn requires a fair amount of strategic planning—your worms only get a small amount of time to move and attack, plus the environment is fully destructible—some weapons leave huge holes that can immobilize worms caught in the fallout. Worms Revolution has preserved this traditional gameplay, while adding some new features for players to try out. Instead of controlling a team of regular soldier worms, players now have the ability to recruit three additional classes of worms, each with their own strengths and weaknesses. The Heavy is a fat worm that can take lots of damage, the Scout is skinny and quick, and the Scientist can heal your teammates with its giant head. Though the addition of classes creates some new strategic options for the player, Worms Revolution doesn’t bring much more to the table. For those looking for a break from the frenetic gunfights and undead hordes that are currently flowing through the mainstream, Worms Revolution will do the trick—but the slow gameplay and an aggravating control scheme will remind players why some games should be remembered fondly instead of getting a reboot. –Alex Springer

XCOM: Enemy Unknown
Firaxis Games/2K Games
Reviewed on: PC
Also on: PS3, Xbox 360
Street: 10.09
It’s been a hell of a year for old-school gamers—fans of long-lost genres have found their best friends crawling back to life in droves. XCOM: Enemy Unknown, a reimagining of the classic X-Com: UFO Defense, is a successful update to a genre that I’ve been craving. Tactical games were a regular staple for PCs, remaining nearly exclusive thanks to their complexity, which rendered a console controller unable to keep up. Clearly fueled by black magic, XCOM is a multiplatform release that panders to the console-gaming crowd without ruining the formula for the PC crowd. The story is simple enough: An extraterrestrial invasion of the Earth has led to the creation of a new global government agency called XCOM to defend the planet. As the commander of the whole organization, you’ll bounce between building up your hidden base and taking squads of elite soldiers on dangerous missions filled with alien guts to splatter. You could argue that it’s dumbed-down, sure, but I’d argue that it’s streamlined. Instead of forcing you to meticulously calculate action points and overcomplicated movement options, the game provides visual indicators of possible actions and frees up your mind to focus on the fun part: killing those slimy bastards! I wish there were more variety in maps, and the UFO-landing missions showcase an incredibly aggravating glitch where the game can’t decide whether the player is trying to order troops INTO the ship or on TOP of the ship, but both of these complaints only arose after a good 20-something hours of gameplay. Then I spent the next several days blasting alien scum and giggling with joy again. –Matt Brunk