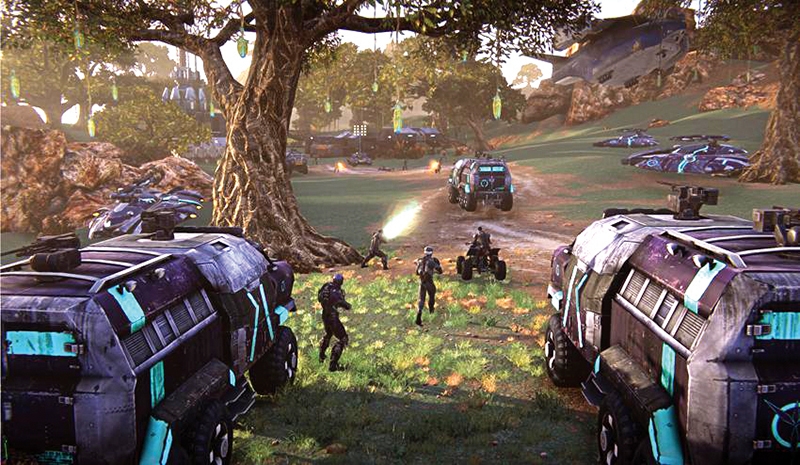 Welcome to Auraxis, where support columns kill more soldiers than the enemy.

Planetside 2
Sony Online Entertainment
Reviewed on: PC (Exclusive)
Street: 11.20.12
The game starts with your character in a drop pod, falling through the atmosphere to land on the raging battlefield below. You hit the ground beside a friendly tank, raise your weapon to scan for nearby enemies and the friendly tank runs you over with the in-game chat reading, “LOL SORRY.” Welcome to Planetside 2— that’s going to happen a lot. Planetside 2 is a massively multiplayer, free-to-play first-person shooter based around the concept of territorial warfare. The only notable games close to this level of player-fueled combat are the PS3-exclusive MAG: Massive Action Game, which only supported up to 256 players, and the original Planetside. Three different factions fight for control over three different continents, liberating and conquering bases and outposts with the blood and sweat of hundreds of players viciously tapping away at their keyboards. Fans of the Battlefield series will find the basic idea familiar: Bases are captured by a squad of troopers holding an objective until the counter ticks down and its ownership is transferred. Combat takes place with a heavy emphasis on vehicles and frequent accidental team-killing, and most players are going to want to pick up a headset and find an outfit of players to join. Choice of faction is mostly aesthetic preference, except for the New Conglomerate faction—their soundtrack music is awful, so good luck playing them for more than an hour without trying to murder your sound card. It’s also a gorgeous game, although the engine is horribly optimized and it takes a pretty hefty computer to run it on full graphics. Aside from that, there just aren’t a whole lot of games like Planetside 2 out there. Games have been trying to simulate battlefields for generations, rarely succeeding—Planetside 2 delivers, and it’s so much fun. –Matt Brunk

Pokémon: Black Version 2
Game Freak/Nintendo
Reviewed on: Nintendo 3DS
Also on: DS/DSi
Street: 10.07.12
The theory about growing up is that you put away childish things, pay your bills and don’t waste time in your day hunting imaginary monsters. So why is it that once a year, I wake up in a dirty hotel room with a Pikachu-shaped needle hanging from my arm? Being the first true “sequel” in Pokémon history, you’d think that the life-sucking villain in question would be less enticing. Two years after unleashing the legendary Pokémon and stopping a troubled youth from destroying the world, you begin as a new trainer ready to document all the cute, furry creatures and start anew. Characters from the game’s predecessor have taken roles as gym leaders, researchers and even adventurers you encounter while reliving events from the past. Because of the two-year gap, closed-off areas from the previous world are now available and the landscape has shifted quite a bit. If anything can be dubbed an improvement, it is the addition of Pokéstar Studios. If your time isn’t adequately filled by catching and leveling monsters with which to beat other children’s pets to death, you can roll to the studio to shoot independent, non-pornographic Pokémon snuff films. This game is built to take hold and ruin your life—you must play it. Stop denying your inner child, grow out your pedophile mustache and join the revolution. –Thomas Winkley