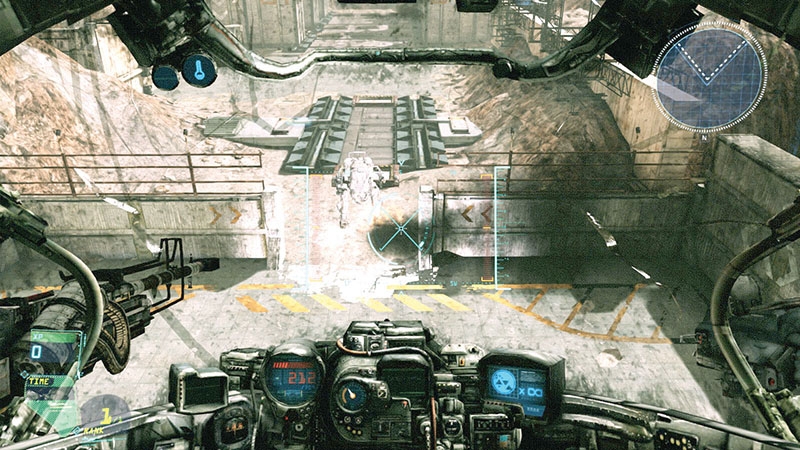 Hawken
Adhesive Games/Meteor Entertainment
Reviewed on: PC (Exclusive)
Street: 12.12.12 (Open Beta)
Giant, walking tanks destroying other giant, walking tanks is a formula that’s fairly difficult to screw up. Even the abysmal MechWarrior Online provides some entertainment value when you get past its atrocious user interface and start shooting. Whether it’s the Godzilla-esque feeling of power that accompanies being able to stomp through cities, or just the deliciously crunchy catharsis of machine guns roaring and sparks flying, it’s always satisfying. And now, after playing Hawken, I don’t think I’ll ever have to play a MechWarrior game again—this is the one that the world has been waiting for. Multiplayer only, and also free to play, Hawken focuses on rebooting what makes mech games fun. It’s slow-paced for a traditional shooter, and the controls are clunky, but for once, it’s intentional and understandable—you’re pretending to be the pilot of a giant freaking robot. Jetpacking over buildings and dodging missiles, these tanks are still agile as hell, considering they’re several stories high. The immersive sound design is brilliant, muffling outside noise to simulate being the pilot underneath tons of steel, while enhancing the pinging of bullets ricocheting off the armor and the groaning of hydraulics. Matchmaking works well, although there are only a couple basic game types, but it’s easy enough to pick up and play for quick sessions. Despite the satisfying gameplay, there isn’t a lot of content here yet. There are several different mech types, and all of them are customizable, but the customization options are mostly just mixing and matching the same mech types and don’t offer any special or unique parts. Still, free-to-play games have a history of regular content updates, and more maps and options are already being promised. Hawken is fantastic, and it’s only going to get better with time. –Matt Brunk

Momonga Pinball Adventures
Paladin Studios
Reviewed on: iOS (Exclusive)
Street: 01.17
Back in the 1990s, Nintendo and Sega both tried to make the “pinball platformer” a legitimate genre with their respective titles Mario Pinball Land and Sonic Spinball. It never really caught on, so seeing a title like Momonga Pinball Adventures appear in the App Store was quite a pleasant surprise for a nostalgic gamer like myself. Developed and published by indie company Paladin Studios, Momonga is an Eastern-flavored action/adventure title where momongas—flying Japanese dwarf squirrels—roll and glide around nine intricately designed 3D stages, guided only by the confines of each level segment and the traditional left/right pinball bumpers at the player’s disposal. There’s a reason for all this, of course: Momo the squirrel is on a mission to save his tribe after an evil band of owls (led by mourning father owl General Kuton) ruthlessly burns down his home town. With the help of a panda who wears glasses, players control Momo through each level, finding secret rooms and collecting stars with ease, thanks to the two-finger controls and easy-to-grasp pinball physics. Accessible but challenging, Momonga smartly avoids the common traps of iOS gaming, walking the tightrope between the two ubiquitous iOS categories: overly accessible “casual” titles, and highly derivative niche titles aimed at the hardcore gamer. A charming adventure game with beautiful aesthetics and a ton of personality (and devoid of in-app purchases!), Momonga Pinball Adventures is more than worth its nominal cost of admission ($1.99). –Randy Dankievitch