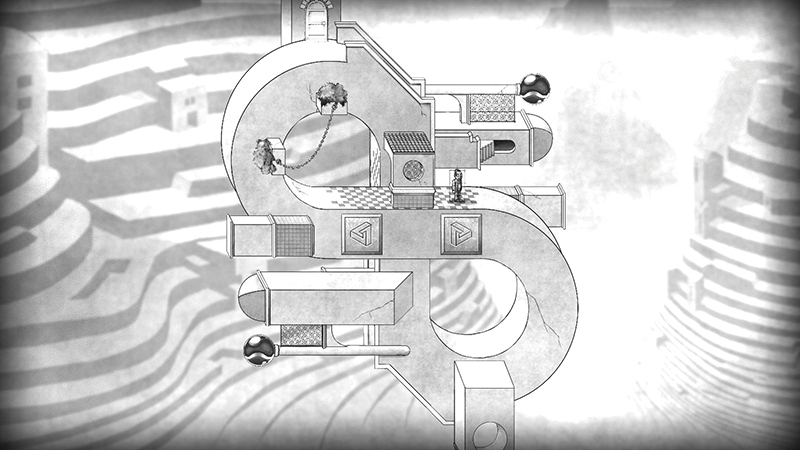 The Bridge
Ty Taylor and Mario
Castañeda/The Quantum Astrophysicists Guild
Reviewed On: PC (Exclusive)
Street: 02.22
The Bridge is a puzzle game about spinning in circles. Technically there’s more, as there are obstacles and goals, and a story that spells out something about M.C. Escher and Newton to give meaning to your spinning, but the game is more or less centered around spinning in circles, back and forth and around and around again. Think of it like those little plastic mazes with the silver ball bearings that you have to guide to the goal by tilting the whole thing. The Bridge is exactly like that, except you guide your character, instead of a ball bearing, to a door. It also does a brilliant job of exposing just how tedious those mazes are when you have to do them over and over. There are a couple of gimmicks to spice things up, like rewinding time to reverse mistakes or, eventually, inverting gravity, but they’re still gimmicks solved by spinning in circles, one way or the other. It’s boring from a gameplay perspective, despite being fairly gorgeous—the art style is the real winner here. Each level takes place on an Escher-inspired, hand-sketched tableau that is almost worth the effort, but the art quickly gets ignored while solving the puzzle. The publicly declared influences of puzzle-platformer Braid are obvious, particularly in the minimalistic and obtuse storytelling as well as the oddly placed rewind mechanic, but The Bridge is not as deep or anywhere near as fascinating as Braid. I wish it was more than a game about spinning in circles, as beautifully crafted as those circles are, but it’s not. If you really, really like puzzle games or anything with an “indie” label, then give it a shot. There are worse ways to spend $15, but then again you could just play Braid. –Matt Brunk

DmC: Devil May Cry
Ninja Theory/Capcom
Reviewed On:
Xbox 360
Also On: PS3, PC
Street: 01.15
DmC: Devil May Cry does so many things right, it’s sad to think that it may become one of the best games of 2013 you’ve never played. Generally, a game being “reimagined” is gamer code for “turned into something awful that doesn’t meet my expectations.” In the case of DmC, this couldn’t be further from the truth. The story sets the tone for the entire series, while defining the relationship between Vergil and Dante. Sure, a few details have been changed from the initial canon, but the artful way the game is displayed more than makes up for some slight changes to a story that only a devout sect of gamers truly know. The combat system in this game is flawless, and that’s not a word I use lightly. Bayonetta is the closest a game has ever come to masterful hack n’ slash mechanics, and DmC has taken it one step further. Effortless switching between weapons during attacks makes the juggling possibilities endless, and a practice room gives you time to develop skills that are heavily needed for the enhanced difficulties. If you simply want story, even the toughest initial difficulty will allow you to quickly move to the end. If you’re up to testing your skills or punishing yourself, try the additional difficulties—I dare you to finish the entire game without taking a hit. –Thomas Winkley