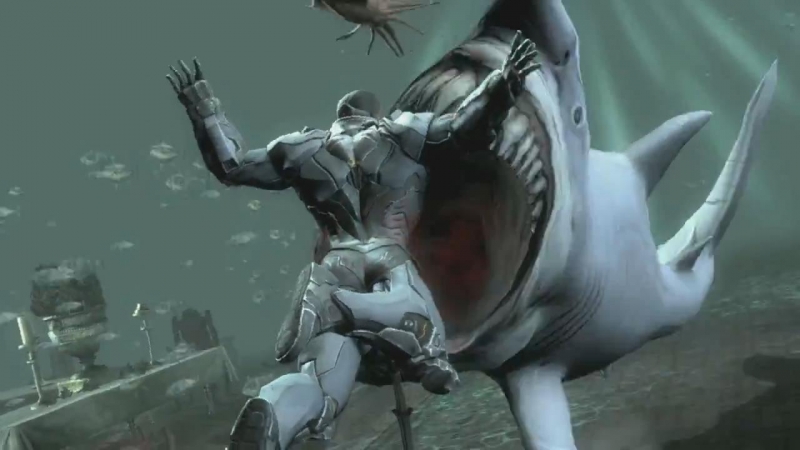 This is the last time I call Aquaman lame…

Bioshock Infinite
Irrational Games/2K Games
Reviewed On: Xbox 360 Also On: PC, PS3
Street: 03.26
When we meet private investigator Booker DeWitt at the outset of the highly anticipated Bioshock Infinite, he’s on a boat off the coast of Maine, heading to a lighthouse to complete a debt-clearing assignment: kidnap a girl from the flying city of Columbia. But from the moment Booker steps into the deeply religious world of 1912 Columbia, it’s clear there’s something dark underneath the bright utopia—mysteries that will slowly reveal themselves throughout the game. Always a series known for its deep philosophies and social critiques, Bioshock has been revered more for narrative than gameplay. This is still true to a degree in Infinite, but there’s much more variety in how players can approach encounters with enemies: Rechargeable abilities called “vigors” can be found about the world, which give players powers to turn the tide of battle in their favor. For example, “Bucking Bronco” will suspend enemies in midair, and “Murder of Crows” sends a wave of flesh-eating crows flying toward the bad guys. It gives just enough life in every battle to make Infinite separate itself in the crowded genre of first-person shooter, with unique qualities that the story and characters take even further—including Elizabeth, one of the most layered, well-written female characters in recent memory. Titles like Bioshock Infinite only come along a few times a generation, and give me hope for the next console cycle looming on the horizon. It’s one of the most ambitious AAA-budget titles ever, executing a difficult, thematically complex narrative with confidence, while constructing a beautiful, mystery-filled world in the sky to tell it in. Openly philosophical and deeply emotional, Bioshock Infinite is the most satisfying gaming experience I’ve had in a long, long time. –Randy Dankievitch

Injustice: Gods Among Us
NetherRealm Studios / Warner Bros. Interactive
Reviewed On: Xbox 360
Also On: PS3, WiiU
Street: 04.16
Injustice: Gods Among Us gives players the opportunity to pick their favorite DC superheroes, with whom to mercilessly bludgeon opponents. With a massive starting roster reaching across multiple story arcs, and plans to expand via DLC, I’m glad to see this game live up to the promises of its developer. NetherRealm previously developed MK vs. DC and Mortal Kombat 9, both which were reasonably fun, but lacked in areas that technical fighting game players needed. Although MK was a step in the right direction for frame data and was loads of fun, it still lacked a technical aspect brought by its other counterparts in the fighting game world. Injustice fixes that issue. With a few technical tweaks, incredible single-player story and a phenomenal cast, this DC brawler is everything you could hope for from a fighting game. The levels are well designed, richly detailed and highly interactive, which adds an entirely new dynamic to fighting. If your character is one with super strength, you can use large elements in the game to smash your opponent for quick damage. If you are a character who doesn’t wield strong physical prowess (i.e. Batman), you can use the environments to escape, or to trap your opponent instead. The combo system functions on a chain system, as opposed to Street Fighter’s link system. What this means is that as long as you input the commands within the window of opportunity in the right order, your character will complete the combination, leaving the strategy to be built around avoiding your opponents’ attacks and countering when he is exposed. Whether you use Aquaman to feed your opponents to various sea creatures or power slam them from space as Superman, this game has something for everyone. Comic-book junkie or not, this game is for you. –Thomas Winkley