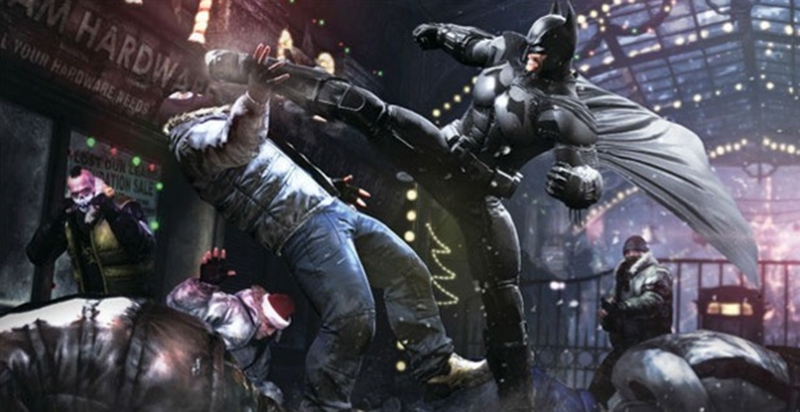 Batman: Arkham Origins
Warner Bros. Montreal/Warner Bros. Interactive
Reviewed on: Xbox 360
Also on: PS3, Wii U, PC
Street: 10.25.13
Arkham City manages to hold its own as a solid—but not perfect—entry. The most notable improvement is the inclusion of more specialized thugs for Batman to pummel. In addition to the common ne’er-do-wells that plague Gotham, Batman now faces martial artists who can counter his basic attacks and steroid-powered Bane groupies who can grab our hero and smash his face into a wall. Combat gets pretty tricky when confronted with a mob that mixes these archetypes together, which often requires a more creative use of Batman’s gadgets. And let’s not overlook the boss fights. Batman’s confrontations with the myriad assassins who have descended upon Gotham are some of the game’s best moments. Its inherent prequel-ness raises a few nitpicky questions—why didn’t Batman break out electric gloves in Arkham City?—but it’s cool to see Batman’s first encounters with some famous villains. The real success with Arkham Origins revolves around a storyline that unfolds like a mixtape of some of Batman’s finest comic book moments, leaving the player with a deeper perspective on the characters of Batman and the Joker. –Alex Springer

Dead Trigger 2
Madfinger Games
Reviewed On: iOS
Street Date: 10.24.13
In a world full of frustrating, timer and in-app-purchase-filled “free” games, Dead Trigger 2 dares to be…exactly the same—an intricate set of systems designed to coax a few dollars out of your pocket. Like its predecessor, DT2 takes a beautifully-rendered post-apocalyptic world and presents players with a set of story-based and optional side tasks, which award cash used to upgrade your team (medic who makes medicine, engineer who upgrades gun, etc) and buy new equipment. As a zombie game, it has an entertaining array of gore shots and graphical effects, but with a completely forgettable story and a complete lack of variety when it comes to tasks (shoot zombie, find green halo “objective” area, repeat). As a free-to-play game, it’s even more frustrating: a simple weapon upgrade often involves three separate purchases, all addled by increasingly-long wait times. Without these F2P annoyances, Dead Trigger 2 could be a pleasant (if extremely repetitive) little graphical showcase for iOS. With them, it’s just another forgettable “free-to-pay” experience. –Randy Dankievitch

EPOCH .2
Uppercut Games
Available on: iOS
Street Date: 11.14.13
Despite the proliferation of new releases every week in the App Store, there’s still only been a handful of true ‘quality’ games on iOS, titles that take advantage of Apple’s hardware and integrate the benefits of a touch screen in interesting ways. EPOCH, a third-person cover shooter, was among the first wave of these titles back in 2011, a gorgeous post-apocalyptic exercise in mayhem starring an upgradable robot controlled by the on-screen swipes and taps by the player. With EPOCH .2, Uppercut Games have certainly raised the graphical bar but, despite the addition of new environments and enemies, there’s a familiarity to EPOCH 2 I can’t shake, —a certain reluctance to take risks with the core gameplay that is a bit disappointing at times. However, there’s still plenty to enjoy, with over thirty different missions and a ton of flashy, powerful upgrades to equip to keep players engaged through the game’s challenging, kinetic campaign (which continues the simplistic “save humanity” story of its predecessor). It might not be the most innovative sequel, but it’s still fun as hell: in the end, that’s what really matters, right? –Randy Dankievitch