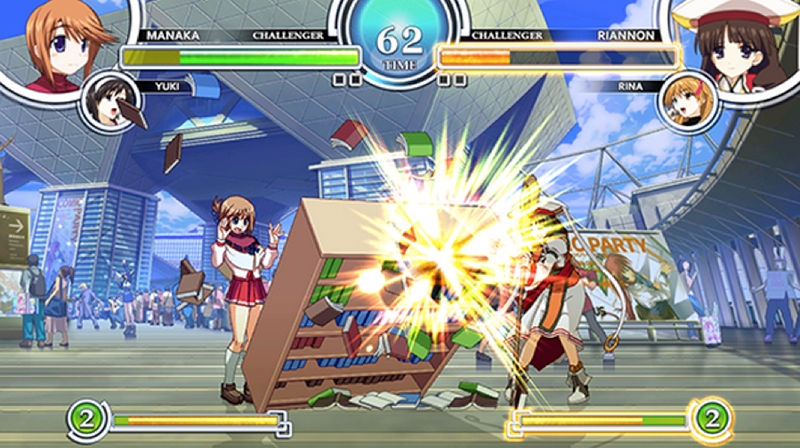 Nothing awesome you have done matters, once you’ve been crushed by a book shelf.
AquaPazza: The AquaPlus Dream Match
Atlus
Reviewed on: PS3 (Exclusive)
Street: 11.19.13
I’ve never supported packing random characters together simply because they’re from a similar genre. Luckily, AquaPazza does it with great success. Before each match, you select your main character and then a support character. Different support characters have unique synergy with each point character, and can create unique combinations between the two. It really doesn’t matter how much of their story you know, because they are all a riot to play. My favorite character is the awkward nerd who, instead of throwing fireballs, trips and subsequently throws books. Winning with her online is the ultimate troll, especially when landing the completely unsafe random super move, which is knocking over hundreds of imaginary bookshelves onto your opponent. The online community for the game is new enough to fighting games that they aren’t aware of safe vs. unsafe moves, so an afternoon of mercilessly crushing competitors with terrible play is also quite a riot. It also helps that the story does not take itself at all seriously, and that the entire thing was caused by one girl brewing a love potion. Pick this up, make the guy riding a tiger eat the high school kid, and live happily ever after. –Thomas Winkley
Broken Age: Act 1
Double Fine Studios
Reviewed on: PC
Also on: Mac via Steam
Street: 01.25.13
Gaming grew through point-and-click adventures, and it is only fitting that the genre should get an incredible revival piece from the minds that brought us Day of the Tentacle, Full Throttle and Monkey Island. Double Fine’s Broken Age raised three million dollars via Kickstarter and has wholeheartedly lived up to its budget. Taking control of Shay, voiced by Elijah Wood, you are performing menial, if not childish tasks until you meet a stowaway on the ship who begins taking you on “manly” quests. While Shay is learning what “being a man is” from a guy in a wolf costume, Vella, voiced by Masasa Moyo, is preparing herself for the maiden’s feast, wherein she and others will be sacrified to “Mog Chothra.” The beautiful world, light orchestral soundtrack and tongue-in-cheek humor the developer is known for sets the precedent for point-and-click in an age when the genre is all but dead. In a world crowded with sequels of AAA blockbusters, it is refreshing to see something so original come from the minds of gaming’s original legends. The system requirements for your PC or Mac are minimal. Spend $24.99 and give yourself an incredible experience. –Thomas Winkley

Compulsion Games
Reviewed on: PS4
Also on: Xbox 360, PS3, PC
Street: 11.12.13
Set in 1920, Contrast puts you in the role of Dawn, the imaginary friend of Didi, who wants nothing more than to restore her broken family. This fun yet glitchy tale takes place across the city, as Didi’s dad tries to plan a circus for his big comeback and you discover who Dawn truly is. The mix of semi-challenging puzzles involving shadow play and platforming make for an entertaining jaunt through an artistically told story. Moving objects into light creates shadows in order to navigate the world, giving a complex depth to otherwise normal levels. The game itself does feel rushed when you hit obvious problems, like object collision, forcing Dawn into a neutral pose with items stuck to her torso. This glitch, unfortunately, happens on more than one occasion. Since the game was free with PlayStation Plus at launch, it must be assumed that Compulsion was on a tight deadline and rushed some critical details. The story in this game is poignant and beautiful, but only completely understood if you find all the collectibles. Grab this on Plus or wait until it’s on mega clearance, but you won’t regret seeing this story through. –Thomas Winkley