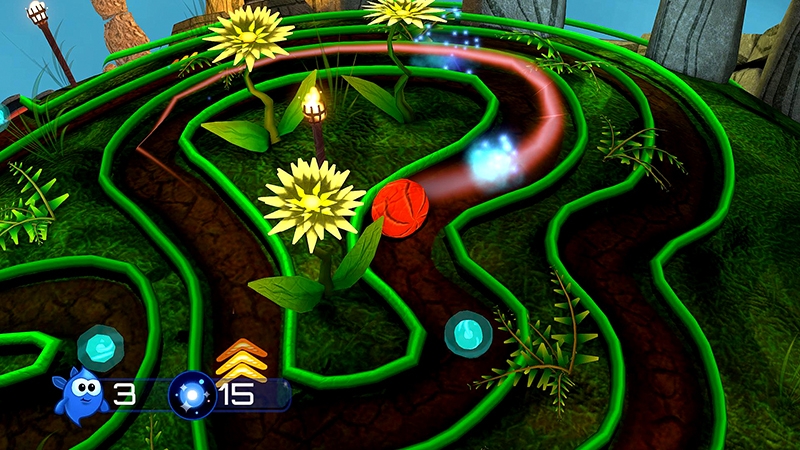 Abyss Odyssey
ACE Team/Atlus
Reviewed on: PS3
Also on: Xbox 360, PC
Street: 07.15
One of the things that drew me to Abyss Odyssey was the art style. You spend most of your time in a bleak, beautiful dungeon, fighting the baddies born from a powerful warlock’s dream. This warlock’s nightmare has started to affect the real world—that’s where Katrien and her allies come in. They’re also part of the warlock’s dreams, but instead of making the world worse, they’re fighting to save it. It’s an odd concept, sure, but it works. You wander through the dungeons in 2D side-scrolling fashion, fighting monsters as you go. The dungeon itself is randomly generated, so every time you delve into the depths, it’s a little different. The deeper you go, the harder it gets—you encounter mini-bosses that can totally kick your ass if you haven’t mastered the controls. Button-mashing will only get you so far—you have to learn the combos and upgrade your skills in order to get down to the warlock. Once enough people beat the big bad below, the world will change for all the players and it gives the game a bit more replayability. It’s a bit redundant and the graphics are a bit fuzzy, but it’s a decent beat-em-up. –Ashley Lippert

Another World 20th Anniversary Edition
Eric Chahi/ Digital Lounge
Reviewed on: Xbox One
Also on: PS4, PS3, PC, Android, iOS, Wii U, Nintendo 3DS
Street: 06.25
There I was, scrolling through /r/xboxone on Reddit (where I get all of my XB1 info) when out of nowhere “Another World is available on the Xbox store” appears! I couldn’t believe it. A game I absolutely obsessed over when I was a wee boy was now available for me to obsess over as an adult. Such an awesome surprise. Another World is a platformer where you play Lester, a physicist with a bitchin’ Ferrari, that gets teleported to an alien planet when an experiment goes wrong. One thing I know for sure, eight-year-old me was a much better gamer … or maybe I just chose to forget how fucking ridiculous this game is. In the first section alone, I died half a dozen times. But damn it, when you get through a section. it is so satisfying. The gameplay, as far as I can remember, has been unchanged, and there has only been a slight facelift in the graphics department (with the cool ability to seamlessly switch between the high-def and old-school look). It’s probably just nostalgia, but I loved playing this game again. –Blake Leszczynski

Armillo
Fuzzy Wuzzy Games
Reviewed on: Wii U (Exclusive)
Street: 07.03
Armillo is one of those games that brings a stupid cheer from Bring It On to mind: “Knock ‘em down, roll around, come on defense, work!” Our hero is an adorable armadillo, Armillo, that’s a bit tricked out. His shell is tough enough to knock down walls, and he spends most of his time rolling around the 3D worlds in his little galaxy—see my problem with the cheer now? Armillo’s adventure begins when his planet is attacked by Darkbots—evil beings that suck the energy out of planets before moving on to the next galaxy. To make matters worse, they kidnap and brainwash his brother. Armillo is determined to get him back, and that’s where the fun begins. Armillo uses his powers to collect orbs of energy and rescue little sprite-like critters. The more critters and orbs you collect, the more extra levels and stuff you can buy. The extra levels are in 2D, and they’re more like the traditional platformer—jumping around the world to find your way to the end. The graphics aren’t amazing, but they don’t need to be. It’s a fun little game—you won’t be disappointed spending money on Armillo. – Ashley Lippert