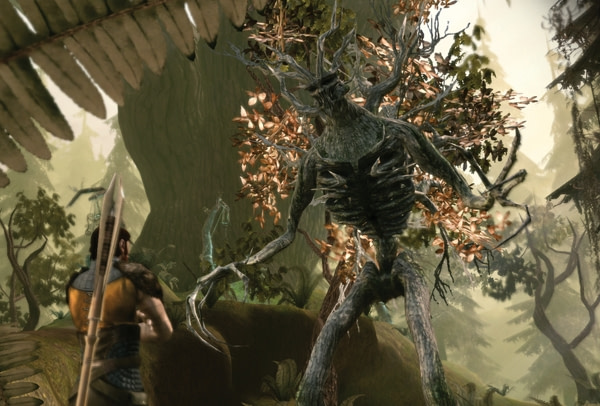 Borderlands
Gearbox Software / 2K Games
Reviewed on: Xbox 360
Also on: Playstation 3, PC
Street: 10.20.09
There’s no shortage of solid shooters for the current generation of video game consoles. Whether you prefer to kill nazis, zombies or nazi zombies, there are way more games out there than even the most devoted of basement-dwelling shit talkers could conquer. If you, like Gearbox Software, want your FPS to stand out, you need a gimmick, a hook—something unique. Borderlands‘ gimmick? It’s like a MMORPG, but with guns. Lots and lots of guns. All of the guns you can imagine and more: lightning SMGs, acid sniper rifles, and even some guns with wacky firing patterns (a shotgun with bouncing bullets). And how does one obtain these guns? Go into the town, talk to a robot/psychotic doctor/hologram, be assigned a quest, and turn it in for money/experience/guns—and that’s the entire game. It’s fun to find new weapons and test them out to see just what kind of unholy damage you can do to your fellow virtual living beings, but unless you’ve been indoctrinated by the loot quests of MMORPGs past, you’ll likely become bored with Borderlands rather quickly. There’s plenty to do, as long as you’re willing to do the same thing over and over again, and the four different classes offer some variety, but the lack of a real story, not enough character customization and a weak single player experience keep Borderlands from true greatness. –Ricky Vigil

Call of Duty: Modern Warfare 2
Infinity Ward / Activision
Reviewed On: Xbox 360
Also On: PS3, PC
Street: 11.10.09
When a game starts with a “Disturbing Mission Content” warning, you know you’ve officially left the kiddie titles behind. The developers at Infinity Ward have truly outdone themselves with the newest edition of the COD franchise. There are so many positive elements to the title it’s difficult to decide where to begin. The non-stop action single-player campaign slaps gamers smack dab in the middle of an international war zone that has the United States pitted against Russia as they reignite the Cold War on American soil. The experience of battling in annihilated suburban communities and a post-nuclear blasted Washington D.C. will no doubt leave shocking images imprinted in your helmet-covered head. Can someone say Post-Traumatic Stress Disorder? Once you’ve completed the solo events, which takes roughly six hours, the co-op special ops episodes create an incredible amount of additional gameplay and an entirely new gaming experience that forces friends to efficiently work together in missions specifically designed for collaborative participation. To top everything off, the online multiplayer aspect has been exceptionally revitalized with a plethora of new expansions, including the ability to customize killstreak rewards with various tactical weapons like sentry guns, predator missiles, Harrier strikes and a full-on nuclear assault. The words “shock and awe” don’t even begin to describe the chaotic mess that ensues in this stunning achievement. –Jimmy Martin

DJ Hero
FreeStyleGames / Activision
Reviewed On: Xbox 360
Also On: PS3, Wii
Street: 10.27.09
Expanding on the mounting popularity of Rock Band, Guitar Hero and the overall craze of
musical titles associated with today’s gamers, the newest hero showcases the world of scratching vinyl records to master the art of mixing classical oldies with modern-day goodies and everything in-between. The quintessence of cool comes in the form of the turntable controller that provides a faithful, hands-on experience complete with crossfader (the most difficult feature) and effects dial that add more complexity to the standard regimen. The impressive collection of over 90 songs features exciting collaborative mash-ups including Daft Punk’s “Robot Rock” vs. Queen’s “We Will Rock You,” Vanilla Ice’s “Ice Ice Baby” vs. MC Hammer’s “U Can’t Touch This” and Marvin Gaye’s “I Heard It Through the Grapevine” vs. David Bowie’s “Let’s Dance.” While the techniques required to master the game’s offerings can take some time to grasp, it doesn’t take away from the overall enjoyment or content. Like its predecessors of the same genre, players unlock additional tracks, venues and avatar clothing items by properly executing multiple sets and garnering points. As an admirer of all forms of music, from symphonic to synthesized, it’s appeasing to witness a breath of fresh air being delivered in the virtual melodic community with the opportunity for artistic expressionism and the tutorial teachings of Grandmaster Flash. –Jimmy Martin

Dragon Age: Origins
BioWare / Electronic Arts
Reviewed on: PC
Also on: Xbox 360, PS3
Street: 11.03.09
On my first play-through of the wonderfully crafted Dragon Age: Origins, I chose the path of a shifty human mage. A mage’s life in the world of Fereldon is one of constant study and isolation, so I figured I would lead my character down a somewhat darker way of life. Within the first few hours, I had killed a small boy in front of his hysterical mother, slept with three deceptively prudish whores (one of which was an overweight black elf), and roughed up a respectable number of authoritative figures, earning my spot in an underground guild of magi.The hundreds of different paths one can end up taking in this game are generously complimented with hours of superb voice acting and cutscenes. The combat is incredibly customizable, bloody and satisfying. The story is consistently mature and engaging. Everything has a feel reminiscent of the Baldur’s Gate series, but without the mouth-breathing D&D lore behind it. The graphics are beautiful and the music is spot on. BioWare has created a massive and incredible world with DA:O, one that drives possibly the best RPG ever made. –Ross Solomon 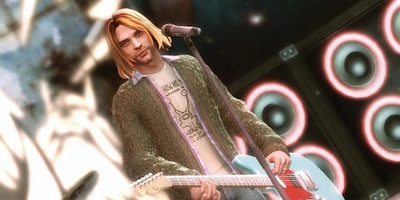 Guitar Hero 5
Neversoft / Activision
Reviewed on: Xbox 360
Also on: PS3, PS2, Wii
Street: 09.01.09
What’s new for the fifth installment (not counting all the spin-off games) of the Guitar Hero gamingfranchise? Basically nothing major, other than the 85 new playable songs of mostly bland popular or already overplayed radio rock tunes. When you think of a guitar hero, Coldplay and The White Stripes don’t really come to mind do they? The addition to GH of playing drums or singing is just to stay competitive with the Rock Band franchise. So does the element of adding playable special guests to the mix, including deceased music legends Johnny Cash and Kurt Cobain, who might not enjoy the fact that their likenesses are making an appearance in a video game. How anyone took the time to master expert or even the hard difficulty in GH gameplay is beyond me, though the trend of the game is easily going downward: I don’t see kids carrying their wireless guitars along with them everywhere they go anymore. There is a reason Guitar Hero is called a rhythm-based game and not a guitar simulator. Maybe the kids caught on and are actually attempting or playing the real deal, instead of staring at a video screen being a so-called “guitar hero.” –Bryer Wharton

Left 4 Dead 2
Valve Software / Electronic Arts
Reviewed On: PC
Also on: 360
Street: 11.17.09
Video games are an anti-social experience for me by choice, so a cooperative multiplayer game like Left 4 Dead is typically something I wouldn’t go for. However, L4D and its sequel are the first multiplayer games I have played obsessively since Quake 3. I realized recently that the appeal is not so much the carnage and action, although those things are incredibly well done and even improved, but it lies in the reward of genuinely working as a team. Plain and simple, if you don’t help each other in L4D, none of you will survive. L4D2 ups the ante a great deal in almost all aspects by taking the setting to the Deep South. You’ll wade through swamps, experience hurricane weather conditions, creep though the French quarter and fight for your lives. New special infected zombies up the ante even higher, and the game’s difficulty is also increased. It’s almost as if the game’s AI Director wants you to quit like a little baby. But you’re not a tiny baby, are you? That’s why you are toting around a whole bunch of new weapons including a SCAR rifle, katana sword, combat shotgun and grenade launcher. This is Game of the Year for me. –Conor Dow