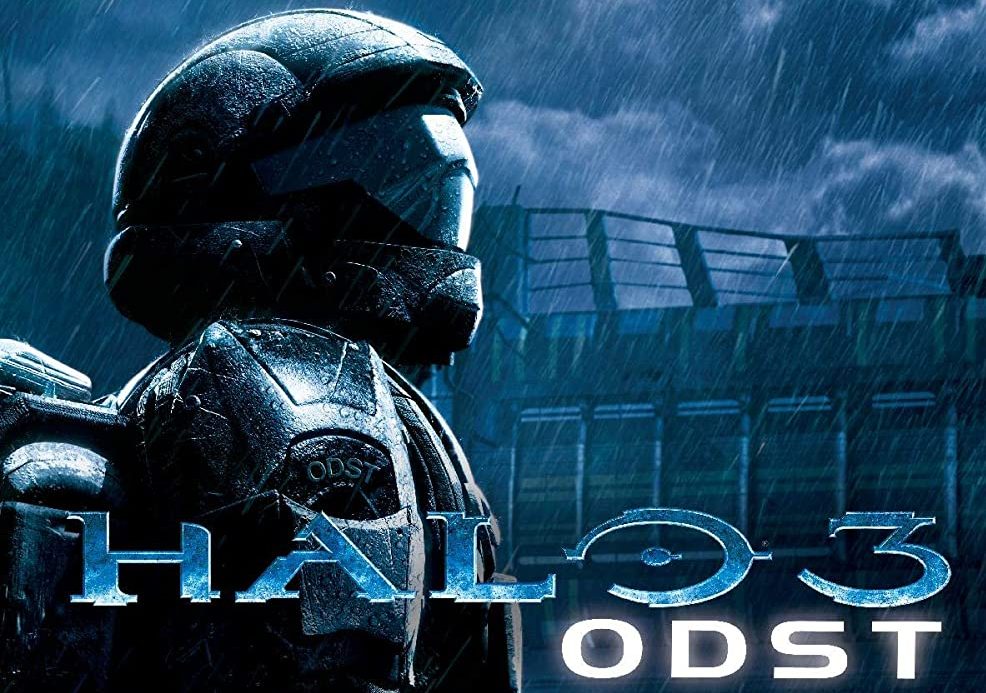 Like the Super Mario Bros. franchise, the Halo series is a bloated cash cow waiting to be squeezed into any format that’ll produce revenue. This newest addition to the Halo universe offers players a condensed campaign that stars an ODST (Orbital Drop Shock Trooper) rookie in search of his missing platoon on the shadowy surface of New Mombasa, which is currently inhabited by the evil Covenant. As clues of their whereabouts are located, action-packed flashbacks are initiated for gamers to relive the squad’s earlier perils. The campaign itself disappoints in terms of length as the average completion time is roughly four hours, but that reason alone shouldn’t deter you from purchasing this innovative accomplishment. Bungie’s designers have successfully leaped mountainous hurdles in the art direction department by providing unsettling city landscape visuals that are nothing less than breathtaking. The primary reason to acquire this product is for the fresh multi-player aspects that include a four-person co-op campaign addition and the new Firefight mode that pits friends against wave after increasingly difficult wave of adversaries in various quarantined arenas. The positive features certainly outweigh the negative in this latest episode that’s sure to subdue fanatics’ anticipation for the next full-course installment due to release in 2010. –Jimmy Martin

The spread of the music game virus is exploding into a global pandemic that will soon outshine the Swine Flu and Mad Cow diseases’ effects ten-fold. Game developers have already seized control of the minds of wannbe college rock stars and delusional middle-aged vocalists, and now they’ve set their sights on the sponge-like brains of the budding youths of the world. Essentially following the same format as the franchise’s previous titles, Lego Rock Band welcomes the future generation of karaoke bar attendees to jam out with newer chart toppers like Pink’s “So What” and All American Rejects’ “Swing, Swing” and as well as classics like David Bowie’s “Let’s Dance” and Queen’s “We Are The Champions.” Online multiplayer is absent from the experience, which is actually quite a setback, but the infamous yellow-blocked, toy-model conceptualizations of iconic artists like Freddy Mercury and David Bowie do satisfy the humorous side of gameplay. It provides a warm and tender feeling to know that instead of having to dish out $8.00 an hour for a babysitter, an intoxicated mom and dad can set little Timmy up with a round of Ray Parker Jr.’s “Ghostbusters” while they hammer out level after level in Rock Band 2 downstairs. There’s nothing like quality family time.  –Jimmy Martin

Okay, so I know you’re skeptical. “Great, another lame racing game by those cock-masters at EA,” you’re probably thinking. Sure, I don’t blame you: For as long as I can remember, the Need for Speed series has left even the most forgiving racing-sim fan droopy and flaccid. Oh, how things have changed, my friends. EA finally wised the hell up and got Slightly Mad Studios on board. Just like how they showed off their race-sim prowess with GT Legends and GTR 2, Shift changes the whole mood of the series. Gone are the fake and arcade-like street races in random urban locales. All of that has been replaced with hyper-realistic physics, absolutely stunning graphics, and ultra-customizable cars. Seriously, the NFS series has gone from suck to kick-fucking-ass. Even though everything from the physics to the sound and graphics is much more realistic, the game remains very accessible to even the most novice of racing-sim players. Your grandma might still play the game like she drives cars in real life (heinously), but almost anyone else can easily get hooked on this game with almost no trouble at all. If you’re mad at how the series has been as of late, I urge you to give it another chance. –Ross Solomon

The franchise that has called upon pop culture buffs and erudite cinema aficionados to vacate their dimly lit movie caverns in order to answer multimedia questions returns with a version quite distant from its precursors leaving it feeble and alienated. Supporting up to four players at once, this version of Scene It? immediately restricts enjoyment levels in various manners, from the inability to personalize avatars to the non-existent online capabilities that were prominently featured in past renditions. The latter element completely diminishes the point of transferring a board game to modern gaming systems, other than not having to keep track of the score, since most true film advocates require contacts outside their personal social circles to compete against formidable opponents and a more intensified experience. Sure, the questions themselves are engaging and more than up-to-date (some queries involving films not even released yet) and the inventive categories produce chuckles from time to time, but the failure to utilize technology inevitably forces one to question the lack of modernization in the title and to inquire whether $40 is worth the price of admission, especially since movie-based questions and quizzes can be found all over the internet at no cost. –Jimmy Martin

In the world of Scribblenauts, your only weapon is your imagination. Luckily, your imagination can summon everything from sniper rifles to spaceships to mangos to velociraptors to snorkels and anything else your feeble mind can think of, and probably some shit you’ll never think of (one word: Cthulu). As the game’s chicken-hat wearing protagonist, you have been tasked with retrieving magical stars (Starites) from each level with only your item-summoning notepad to help you solve a variety of puzzles. The goals range from simple, like rescuing a cat in a tree, to crazy-fucking ridiculous, like transporting three criminals from the bowels of hell to the pearly gates. The game features thousands of objects which can be conjured up via the touch screen and stylus, but moving the protagonist around and getting the objects to work the way you want them to can be frustrating. You’ll eventually find yourself falling back on some standbys (I never thought I’d get tired of blackholes or pegasi), but each puzzle can be solved by an almost innumerable variety of objects. Scribblenauts is hugely ambitious, and even if it is a bit cutesy and features semi-maddening controls, its strengths greatly outweigh its weaknesses. –Ricky Vigil

I’m all in favor for games that involve slaughtering the walking departed. Left 4 Dead, Dead Rising, hell, even Zombies Ate My Neighbors, so you would think that the downloadable content of Zombie Apocalypse would have my full endorsement with its unrelenting waves of flesh eating beasts. Alas, it was not meant to be. Poised with a bird’s eye view over various landscapes, up to four players can attempt to survive 55 days (waves) of madness stocked with an assortment of weapons including flame throwers, shotguns, and the sadistically shiny chainsaw. The biggest flaw in the game is the repetitive nature of its design as the same four types of zombies enter the screen thousands upon thousands of times, significantly reducing their attraction and inevitably inducing absolute boredom. There are some smart choices in alterations to different stages like chainsaw-only rounds and blackout waves that force gamers to fight in close to complete darkness, but it isn’t enough to encourage players to return for future battles. –Jimmy Martin

I envision a future in which jumping sideways in slow motion and shooting your dual pistols is no longer the epitome of cool. The Matrix was a sweet movie, I think we can all agree, but Keanu did that limbo over a decade ago. It’s high time we let the “bullet-time” trend go. The bad boy developers at A2M, however, feel much differently. Wet would have us believe slow-mo gun fights aren’t a hackneyed gimmick—they’re a God damn institution. They must be expanded upon! We’re talkin’ slow-mo knee slides, slow-mo wall runs, and slow-mo, um, swords! In fact, Wet uses so much slow-mo that trying to fight in regular-mo is pretty much useless, and you get shot to death in seconds. This concept hits flat- out boring by the end of the first level. The decent artistic presentation and unusually coherent storyline might keep you going for a few more levels, but by around the 500th time you knee slide and shoot somebody or wall run and shoot somebody you’ll decide enough’s damn well enough. Wet aims at being a style-drenched shoot-em-up and fails even at that—maybe the problem was picking such a mediocre genre to begin with. –Jesse Hawlish