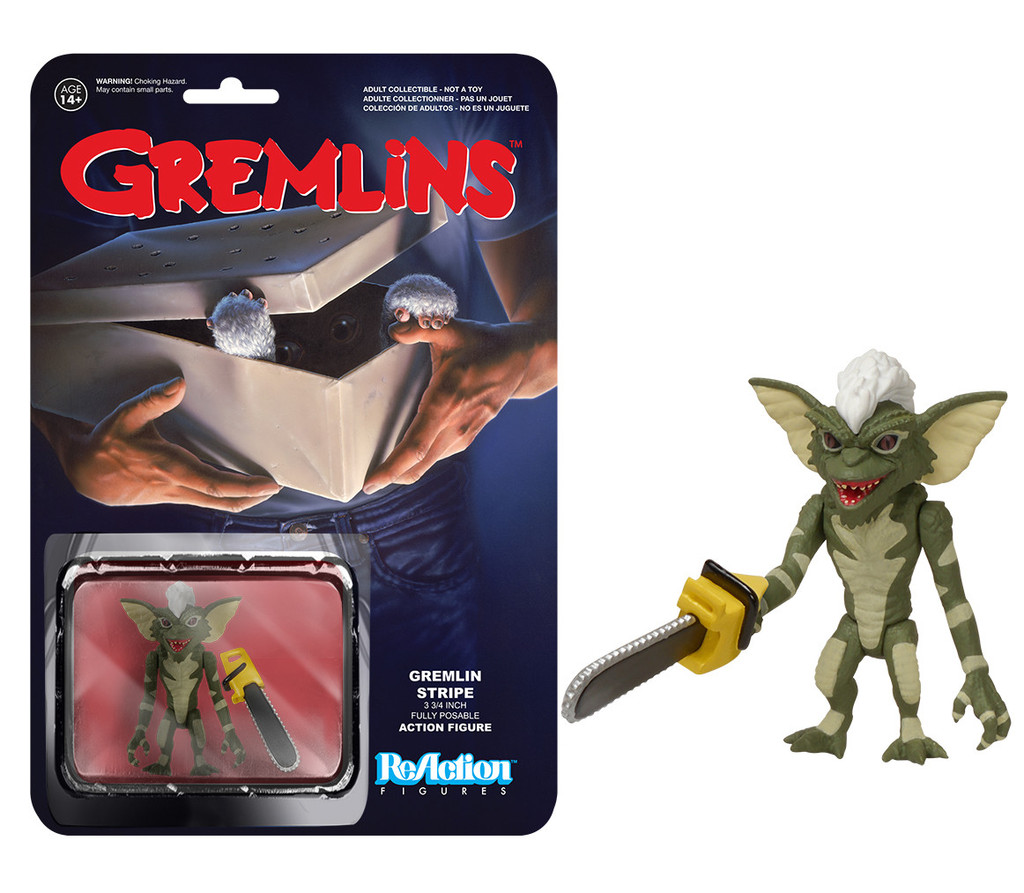 To open or not to open? This is the question that divides the toy collecting community. Both sides have valued arguments. The “to open side” thinks that all action figures should be opened, played with or displayed, as that’s the reason the toy was made, whereas the “don’t open” side likes the toy trapped in its clamshell prison. They like the box art, the overall look of the toy in its package as well as the fact that if it needed to be sold, the toy would be worth more considering that it was never opened or played with. See, I’m split down the middle. If I can, I’ll purchase two of the same figure, one to open and one to appreciate in value. Not to mention that I simply don’t have enough space to store them all, and if I keep it in its box, I can hang them from my wall, problem solved. In the case of ALL Reaction toys, I would have to think that even the “open and play with them side” would agree that these toys should remain in the box.

ReAction themselves pretty much all but say leave these figures be. You’ll notice in the top right corner of every figure it says, “Adult collectable, not a toy.” Well if it isn’t a toy, what the hell is it and why can I buy them at Toys R Us? The simple answer to this question is well, simple: It’s art. It’s art that you hang on a wall or maybe display in a display case and admire. In the case of ReAction, I’d say it’s better to hang on the wall for a few big reasons that I’ll get into later, but one of those reasons is the box art. I would say that a lot of the money you’re spending on the ReAction figures is mostly because of the gorgeous box art, often screengrabs or the poster from the films they’re representing. You see, it’s nostalgia that ReAction is banking on that makes you want to purchase the figures, because in the early days of the line the figures looked rough, really rough. Some times not looking anything like the character it was supposed to be representing, but for some reason you were drawn to it probably because of the fact that it was a classic ’80s movie that you grew up with as a kid and of course, that damn fine box art. Having said all that, lets move onto the toys at hand… Gremlins!

Gremlins is one of my favorite movies of all time. It’s got everything, Cuteness, scary monsters, satire, Cory Feldman, Mike from Breaking Bad and Phoebe Cates. It was a no brainer that ReAction would add this to their stellar ’80s figures. The entire first wave of the Gremlins line goes Billy with backpack, Gizmo with the arcade machine, Gizmo with Barney the dog, Gizmo with X-mas hat and keyboard, Stripe the Gremlin with Chainsaw, Mugger Gremlin and Gremlin with 3D glasses and popcorn. The figures I’ll be reviewing are, Billy, Stripe and Mugger Gremlin.

First up, Billy. Billy is of course the lead of the movie and the kid who is gifted Gizmo as a Christmas present. Pretty weird gift to give your kid, a possible monster/alien that has the oddest most specific list of rules in order to take care of it, but hey, who am I to judge? The figure is extremely basic (as are most ReAction figures) coming with Billy and his backpack. The backpack slings nicely over Billy’s shoulder and surprisingly enough, actually hangs on his back nicely. Billy himself stands a little over 3 inches and can stand on his own just fine. The paint job is good—not great, as I could tell some of the paint from his neck slightly bled over onto his shirt. Not that huge of a deal, but hey, I’m reviewing over here. The articulation is basic, his arms and legs move, as does his head. No bending at the elbows or knees, just his arms and legs. In terms of displaying, Billy’s the best of the three, considering he is the only one that can stand on his own.

Mugger Gremlin comes with a pistol, a really tiny pistol. This was the Gremlin that scared me the most as a kid. I mean, he had a creepy Gremlin-sized ski mask and brandished a Gremlin-sized pistol. Dude looked look more like a rapist than a mugger. The figure is really tiny at barely two inches, and the paint job on him is fantastic, probably the best of the three. No bleeding or nothing, and the ski mask looks great on him too. His little pistol fits perfectly in his hand and aims out nicely. Just like Billy, the articulation is limited, just his arms and legs move. One huge flaw I found with the figure is it can’t stand on it’s own, period. I’ve tried a number of ways to display him and each time, gravity pulled that little fucker down. I had to resort to using a bit of poster putty on the bottom of his feet to hold him. Another draw back is his pistol—that thing is almost microscopic. God help you if you have a deep carpet and manage to drop it. Shit’s gone forever.

Last but not least, Stripe, the head badass Gremlin in charge. He was the coolest and most mean out of all of them, he went and killed Billy’s science teacher by sticking a hypodermic needle in his ass. Rough way to go, I mean you’re already tangling with a Gremlin but to have him kill you in such a humiliating way… damn. Anyways, the paint is fantastic on him, just like the mugger. He also stands at just about two inches and comes with a nicely painted chainsaw. Now, the chainsaw does fit in his hand, but it just lies at his feet. There is no way to have him hold it in both hands or even raise it above his head; this is due to the lack of articulation. Like the previous two, only his hands and feet move, but can’t bend. This kind of sucks, ’cause you have this badass chainsaw that just lies there. Just like the Gremlin before him, he can’t stand on his own. Poster putty to the rescue!

In closing, ReActions Gremlins are some fine figures that should remain in the box. The fact that they’re tiny and can’t stand on their own all but confirms it. I also think they dropped the ball a bit with this first wave. Did we really need three Gizmos? The price on them could have been lowered a tad, too. The asking price is only 10 bucks—not bad, but shelling out that much for a figure that’s barely two inches tall seems a bit excessive. If you’re a Gremlins fan like me, though, it won’t really matter; you’ll need to collect them all. So buy this line, hang them proudly from your wall, but if you insist on opening them, invest in some poster putty.