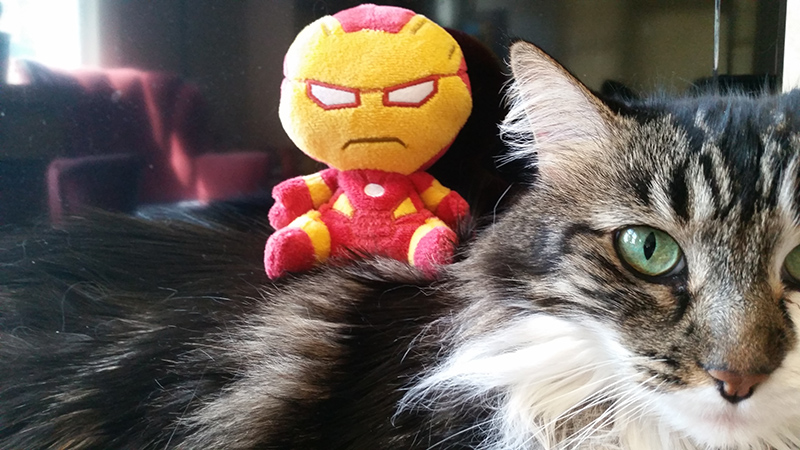 “I am PLUSHY MAN.” It has a certain undeniable ring to it, an authority and bravery that is unmatched in the world of little miniature super heroes. While others remain tiny little softies, the Funko Mopeez Iron Man plushie rises to the challenge to defeat even the most menacing of plastic action figures, big or tall. No enemy is too fierce for the cunning and skill of the man in the fuzzy polyester outer suit. His heart may be synthetic, and he may be filled with hundreds of plastic pellets, but make no mistake, this little warrior is made of what it takes to conquer anything, from the cubicles of your office building, to the living rooms in a city near you. Plushy Iron Man is determined to keep our streets safe from any obstacle, super-villain, or obsessive stapler collecting co-worker. He comes fully equipped with a menacing gaze and an officially licensed Marvel butt tag.

Our adventures for the day started off with conquering one of the fur beasts in his new lair. At first, the fur beast (affectionately named Peaches) was reluctant to allow this intruder near her. She batted at him with her sharp beast-claws and the Funko Mopeez Iron Man plushie remained still and fearless while she sniffed and investigated him up close. The best thing about this Iron Man plushie is his sharp sense of humor, and clever quips which make him oh-so-human in the face of grave danger. Her hardened temper was no match for his soft fuzziness, and she eventually melted into submission, cuddling plushy Iron Man for a solid 20 minutes before accepting him as an ally and friend.

Once the kitty—er, beast—fur was easily wiped free from plushy Iron Man, he tried out his flying skills around his new lair. The upside of this flight training was that his plushy-ness aided in the durability of certain landmarks in the lair. The flower vase, the flat screen global defense monitor, the delicate framed art—adding style and grace to the surroundings—were all unharmed in the event that the landing gear or quick maneuvering capabilities failed (i.e. I flung him a little too hard across the room). He began to meet his other new partners in thwarting criminal activities in his cool new downtown Salt Lake City lair. He was fairly uninterested when meeting the plastic, dollar-store ninja twins. When introduced to Totes-Adorbs, the Hamtaro plushy, he blushed a little bit, and turned a deeper shade of soft poly fuzz. However, it wasn’t until he met mini-action-figure Deadpool that things really kicked off. The two had a raucous Gentleman’s party while I ducked away to work for a few hours. This was evidenced by the streamers, top hats and empty champagne bottles that littered the living quarters. If anyone asks, I have no idea how they procured that many bottles of bubbly, and I stand firm that I was not able to enjoy any of it before those two finished it off. To my absolute pleasure, they did not shirk from their duties even when enjoying their festivities, because I was surprised to find a nice neat stack of knocked out thugs laying on my porch, waiting for the authorities to process them into the slammer.

We finished off our day’s adventures with a nice healthy snack. He prefers gluten-free items, which was a little picky in my opinion, but anything for my new buddy, I guess. As we turned on some Avengers for entertainment on my flat-screen global-defense monitor, we settled in for cuddles and a nice nap. He is just so soft and squeezable, that falling asleep was inevitable and we dreamed of new adventures together. I would highly recommend the Funko Mopeez Iron Man plushie.