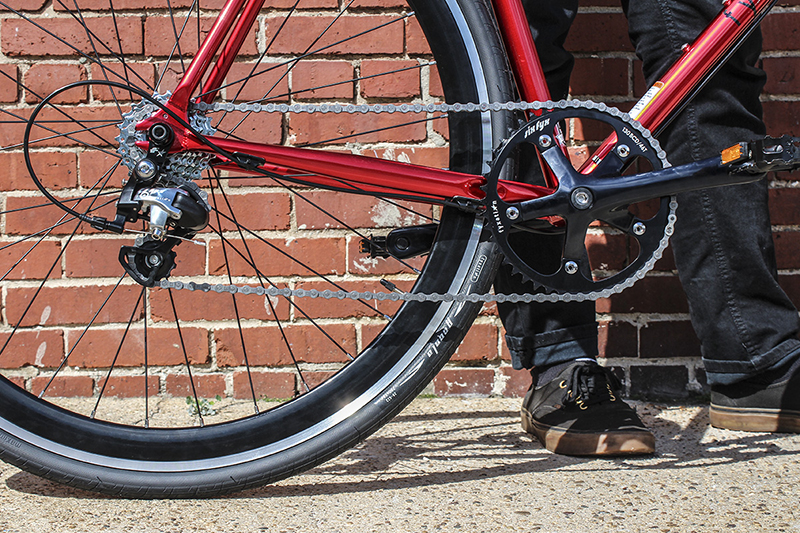 It’s 2017. American Apparel has gone bankrupt, conclusively. There is an abysmally unqualified buffoon in the White House. Indie rock has lapsed to America’s paint-by-numbers pop-music form. And somewhere along the way, from the 2008 hipster apocalypse to now, I rode a fixed-gear bicycle for a spell. Moving on from when it was stolen a few years ago, I still craved the minimalism that a fixie provided but with a little less commitment. I treated myself to a Fyxation Eastside, and I’ve loved it and have ridden it as a single-speed. Ever since I obtained my beloved chariot, I’ve had my eye on another Fyxation gem—the next step in my cycling adventure that continues the minimalist heritage of my Obama-era coming of age, yet advances my riding needs and habits. I now ride a six-gear bike: I installed Fyxation’s Six Fyx Conversion Kit onto my Eastside. After about a month and a half of using it, I love the Six Fyx, too.

It’s essential first to herald Fyxation’s Eastside “fixed-gear bike,” though riding single-speed is an option with their flip-flop hub, which is what I chose for it, as I mentioned. My matte-black Eastside is sleek, sexy and light. It’s durable. The way it flows has always felt purposeful and smooth. It’s been the city-smart bicycle that I’ve always needed and wanted, and for all these reasons, I feel a … connection with it. Now a casual commuter cyclist, I’ve never experienced any problems with my Eastside. It’s the craftsmanship of this bicycle that has made me a Fyxation fan.

In the same Fyxation pamphlet in which local cyclery Saturday Cycles’ Mark Kennedy showed me the Eastside, I also espied the Six Fyx. I have an affinity for gadgets that maintain a sense of simplicity, and there was something about having six gears that spoke to me. A three-speed? Might as well keep riding a single-speed. Nine/10-speed? Well, that’d be cool, but I wanted the Eastside. I’d wanted to ride a single-speed for awhile until I craved some gears, and upgrading a $449 single-speed city bike to a six-speed after a couple years with the $299 Six Fyx made sense.

What exactly is the Six Fyx and a conversion kit? Fyxation states on their site that the purpose of the Six Fyx “isn’t to ‘fix’ anything,” in the bicycle sense of “fix” that most often denotes a fixed-gear, ball-bearing-less back cog. The Six Fyx fixes the “fix” by adding gears. It’s a fully comprehensive conversion kit for fixed-gear or 120mm-rear-wheel frames. It includes a hub/cassette, shifter, derailleur/removable derailleur hanger plus all of the other components necessary for conversion, except for a nine-speed chain. Buyers have the option of ordering the Six Fyx with a complete back wheel laced to their hub and all parts, or all parts and their hub so they can build their own wheels. Their front chainring is a 46-tooth sprocket. I happily returned to Saturday Cycles on 605 N. 300 W. to have the Six Fyx installed.

There are the two options of bar-end shifters and thumb shifters on the Six Fyx. I have the bar-end shifter, which took some getting used to, as it’s my first one. Initially, there seemed to be some play beyond pushing to my lowest and highest gears with the shifter, so gauging if I was was in either one of those lowest/highest gears was vague if I stopped paying attention. After a couple weeks of rides, though, I became more familiar with the feel of my setup, and I don’t know if it’s that anthropo-mechanical relationship or that my chain is clicking more into gear—or both—but the Six Fyx now feels broken in and seamless.

Since I must travel in the Lower Aves during my commutes, the Six Fyx’s six gears provide an optimal range for the kind of steep-hill road-cycling travel that the area can throw at you. I must have been a little spoiled with the teeth ratio on my stock Eastside, as it provided a nice median speed; with the Six Fyx’s highest gear, I’m either booking it down a hill or am at max speed gaining even more. The low gear is just shy of “granny” (for me), and I still feel that I’m working out—one of my imperatives as a commuter cyclist—when I use it as I crest a hill. On the whole, the gears I have on my Eastside make for a lot of fun.

If you’ve progressed a bit in life past your scrappy Vans Authentics–and-flannel-button-up lifestyle and toward some heightened commuter goals on your bike, or if you just need to be more conscious of your knees, the Six Fyx is for you. Six gears are perfect for your commute to work and back, to and from the bar and for errands around town—and you’ll thank them up the inevitable hill that you encounter on either leg of the trip.

Alongside the Six Fyx, I also integrated some of Fyxation’s Gates Pedal Straps. They’ve proven handy in riding my Eastside with efficacy. Whatever your bicycle need or desire, Fyxation truly offers it all with quality and style. With summer in full force and cooler cycling on the way, there’s no better time than now to upgrade your bicycle life. Fyxation currently features a discount on the Six Fyx at fyxation.com. Get your Fyx. –Alexander Ortega