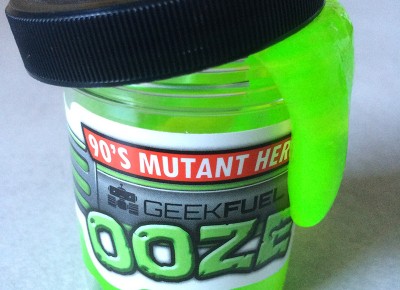 Geek Fuel was gracious enough to send us another box of awesome goodies, so of course we dug down into the box and played with everything that came our way! For those of you not aware of the concept of monthly gift boxes, companies such as Geek Fuel provide monthly subscriptions to receive free stuff in the mail each month to satisfy your geeky needs. Though it came a little late, this box is for the month of June 2015. Let’s open it up and see what we got.

With the release of Jurassic World, we get the two books that the entire franchise was based on. Jurassic Park 25th Anniversary edition, and The Lost World. Just to show off my nerdom, they’re both sitting on my original worn out copy from when I got it as a kid. Both of these books are very awesome and far outweigh the movies, as any book should. However, there’s a lot more death and a lot less seeing a bare-chested Dr. Ian Malcom. They’re both a must-have and a must-read.

An obvious nod to the Ninja Turtles, but if you think back, everything was covered in slime. Heroes were made from it, Planeteers were trying to prevent it, and half your toys had it. Hell, Nickelodeon built an entire network around that concept. It’s a shame that the slime geyser doesn’t still exist … but I digress. This is somewhere in the middle of the slime you got with Ghostbusters figures and Gak—very slimey and very modifiable into whatever shape you want. But much like those items, you need to be careful where you play with it, as it will pick up whatever it touches, especially dust and hair. Plus, there’s no major residue or bad smell on your hands after. Definitely an alternative to office stress toys.

Not a lot to say here, but a nice throw-in item with the books. This Mortal Kombat–themed bookmark, features everyone’s favorite dueling ninjas, Sub-Zero and Scorpion. That’s all there is to it.