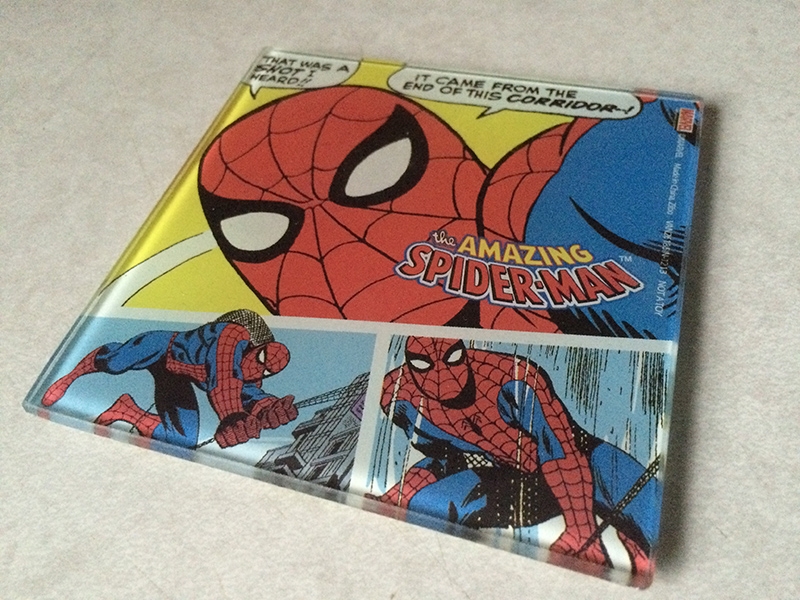 For many collecting geeks and nerds across the nation, that old sensation of getting something cool in the mail never goes away (There’s just some things you can’t replace, Google!). Now that this industry is starting to see a boom in subscriptions, we’re finding new box companies popping up all around the country, ready to send awesome gems of nerdy fun to your doorstep. In our friendly neighboring state Colorado, the newest company to join the mix is Geek Fuel, who have put together an awesome collection of items for their first few boxes that we can’t wait to share.

Using the latest in defunct ’90s friendship technology, this massive slapband can either go around your wrist or, more effectively, around your beer. This is a fun little item to show off the first time and continue making people smile every time you do it. Is it totally unnecessary? Absolutely! But that’s part of the fun, and it actually works.

Okay, let’s get it out of the way: No, this isn’t canon. Now get over it. Much like any poster you’ll find in one of these boxes, it’s hit or miss as to whether or not you’ll like it. This cute little Yoda poster is made by Terribly Odd, who contributed this design in a style that you don’t see too often. It’s made on some thicker material so that you could actually hang it on the wall and not watch the corners rip away in a few months. A must-have for Star Wars fans.

When it comes to pins, geeks are obsessively picky, from the design to the weight to how badly it will ruin whatever you put it on. These four pins came in a set where you have a 1-in-12 chance of getting any particular design, with the odds going up for the cooler pins. I got two zombies (Oh! A Pirate) and two plants, made with about a 1/8 thick cast that won’t bend or break easily. These are one of the better items in the box and totally worth the money if you decide to collect and buy more.

Square Heroes is a fun multiplayer Steam game where you take on each other in combat. It’s kind of like Duck Game, where you run around as one of several characters, picking up items and killing off the other players for points. In addition to the downloadable game code, you’re also given a tattoo sheet so that you can stick your favorite square on your body (results and locations may vary) for a short amount of time. I’m not a fan of the tattoos, but I know many who are, so that’s a nice add-on to what’s already a fun game that you should be playing right now. Get ready for the annual tournament!

The only disappointing item in the box was this very random, very odd magazine, focused on gaming. I’ll be very honest, I’m not entirely sure what this magazine wants to be as a publication. You open it up and are immediately given articles on laser games and pinball, but then flip to a Gears Of War discussion, an interview about box art, a Donkey Kong country retrospect, a look at the new game Axiom Verge, a cover story on “the heart of retro,” and some other random articles about past and present stuff. I don’t know what’s missing, but it doesn’t pull me in like magazines such as Nintendo Power or GamePro used to, and ultimately feels like a lot of ideas were thrown at a wall to see what sticks. I won’t discredit it, but I’d like to see more. Still, it’s a little hard to believe anyone would pay $10 for it.

So as Marvel prepares to destroy EVERYTHING they have ever created in the past 54 years, we’re about to embark on one of the biggest adventures they’ve put to paper since Civil War. Well, at least that’s the hope. When you hit the reset button on everything, you’re bound to get something wrong in the fans’ eyes, but only time will tell. For now, Secret Wars has started anew, and you’re given Issue #1 with a special variant cover from Dynamic Forces, complete with its own certificate. The issue sets the tone nicely for what you’re due to experience, and very little is going to prepare you for the death and destruction you’re given at the start. Enjoy it while it lasts.

Not much to explain in this one, Geek Fuel made their own in-box magazine, talking about some of the items you’re currently playing with and nerdy topics you should be getting excited for. It’s a pretty decent read, but it’ll be interesting to see what it could be if they expand their writing and content.

Yes, Whovians! There’s an exclusive Doctor Who–themed item in this box that you don’t have! Mwahahahahaha! Ahem … anyway, this T-shirt looks like a parody of a Led Zeppelin band shirt, but on the back are a ton of show references listed as tour dates. We won’t give away the gags on the back, but let’s just say every one of them has particular significance to the most recent set of Doctors you’ve known since 2005.

If you pay a little extra on these boxes, you have a chance of getting some cool bonus items, like we did. Nothing says “this home is a geeky home” than having your friendly neighborhood Spider-Man around to keep an eye on things. The coaster is glass and has a non-descriptive comic strip of him in action. After that, yes, it is just a coaster, but who fucking cares? IT’S SPIDER-MAN! And he’s protecting your counter from condensation!

They say good things come in blue boxes, and this one is pretty cool, but ultimately confusing. Super7 created this popular line of Ghost Land toys that have been around since the late ’00s, mostly made of vinyl and coming in four different colors. The upside: they’re awesome collectible toys and you never know which one you’ll get. The downside: they’re not really from anything, per se, so explaining to first time viewers what they are and why you collect them is an uphill climb. I totally get why they’re popular and collectible, but as a toy itself, beyond having him sit on my shelf or next to his box, I’m not entirely sure what to do with the guy, other than fill him with some Zots for the occasional candy treat. You could go either way on this one.

This is mighty impressive, something for the gamers, the comic fans, the TV fans, the collectors and a couple oddities thrown in there. If I were a first-timer purchasing this particular line, I’d give Geek Fuel at least three months to see what else they have coming down the pipeline. Granted, you probably won’t love everything in here, but there’s enough to enjoy that you’ll probably agree it was money well spent.