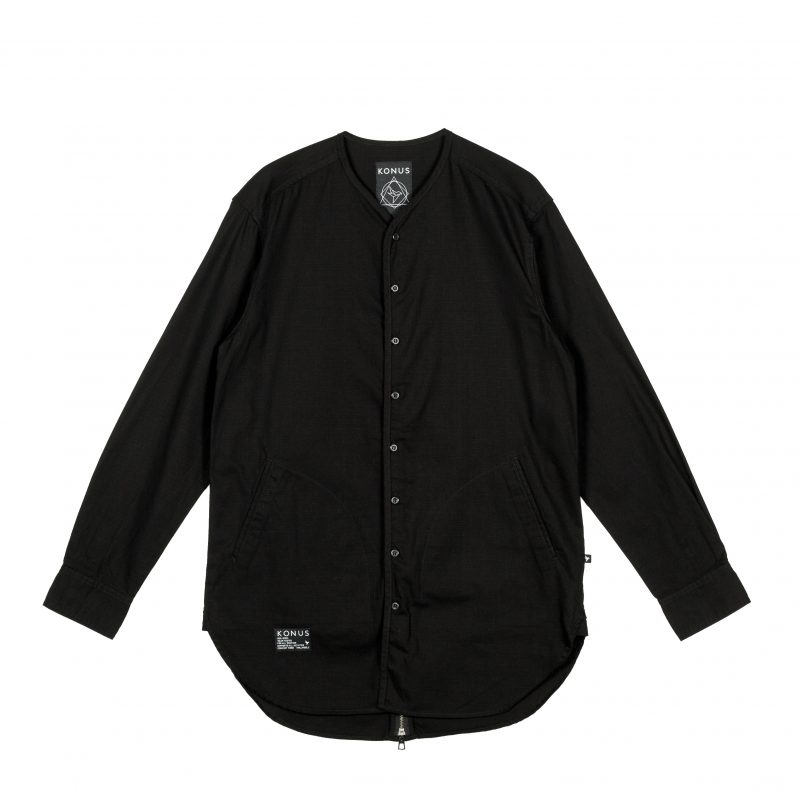 Photo courtesy of The Brand Amp In the midst of oversized jackets, military-inspired palettes and geometric prints, KONUS’ Spring 2017 collection presents the Redan Button Up shirt. Like most of KONUS’ designs, the Redan fits nicely into KONUS’ self-proclaimed “elevated street” style and maintains the brand’s emphasis on sleek, street-savvy functionality. Overdyed and available in two colors, olive green—which carries a more camp-chic feel—and a polished black, the Redan is given a special wash treatment for vintage effect. The wash treatment doesn’t distress the shirt, but adds a nice visual and tactile texture to the thick fabric. The shirt is sturdy and firm without losing out on comfort. I love that the shirt is oversized—the extra length adds a breathable flow to the top without compromising its silhouette—while remaining true to size (by men’s sizing charts). Aesthetically, it’s a remarkably versatile garment: I’ve paired it with several styles of pants, skirts and dresses, layered and buttoned in various ways for looks that range from spartan to witchy to sports luxe. The top can be dressed up a bit, too, as its subtle flairs add some elegant accents to any ensemble. Design-wise, my absolute favorite aspect of the Redan is its mandarin collar. The KONUS logo is tactfully placed at the bottom right of the front of the shirt, and the lapel panel hides all but the topmost button, adding to the Redan’s minimalist, function-forward feel. Let’s not forget the small, welt waist pockets, which are unobtrusive but can easily carry phones and small wallets. With spring’s warm days and brisk nights, the Redan is an optimal item for the transitioning season. The Redan comes at a sizable $130, but it’s a durable, functional and versatile investment.
–Kathy Zhou

KONUS boasts a wide selection of stylish clothes ranging from patterned and be’patched jackets to distressed jeans to branded T-shirts. In their lineup of modern, chic garments stands the Stern, available in olive green or black. This military-inspired button-up, though subtle in monochrome, is a statement piece. The most dynamic element of this shirt is its collarless, almost-V neckline, which imparts a monkish je ne sais quoi that allows for a nice respite from typical collared shirts.

At first, I was wary of the ripstop on the fabric, but once I actually saw and felt it, I realized that it is an understated textural embellishment that enriches the shirt. Being that this is a liner shirt, the fabric is hardy and thick (If you don’t normally wear an undershirt or brassiere, you may want to the first few times you wear the Stern). KONUS’ Stern is optimal for spring nights when balancing the crisp temperatures in the evening with the need to stay on top of your style game. For an urban look, match the (black) Stern with black sneakers, jeans and a beanie (with the olive version, I’d wager that white sneakers, blue jeans and an earth-tone cap or beanie would create a similar but brighter effect). For the aforementioned monastic touch, lose the hat and dress up the footwear. The Stern shirt also makes for a great layering piece, but it won’t work over a regular crewneck T-shirt—you’ll need a V-neck, tank or something that doesn’t peek out from underneath.

The zipper that runs up and down in the center of the back adds a utilitarian flair, and it’s a nice way to fishtail the back open for a looser look and some ventilation when needed. Also, the waistline welt pockets have proven quite handy for keys, my iPhone and other odds n’ ends that I need to keep on my person—snugly retaining little objects on quick bicycle-ride errands and jaunts. Overall, the $118 price is right for this button-up.

The Stern from KONUS is your next wardrobe staple to elevate the mystique of your mythos. Beware, however: This shirt will have you sneaking in a few open browser tabs on konusbrand.com for more standout additions to your closet. –Alexander Ortega