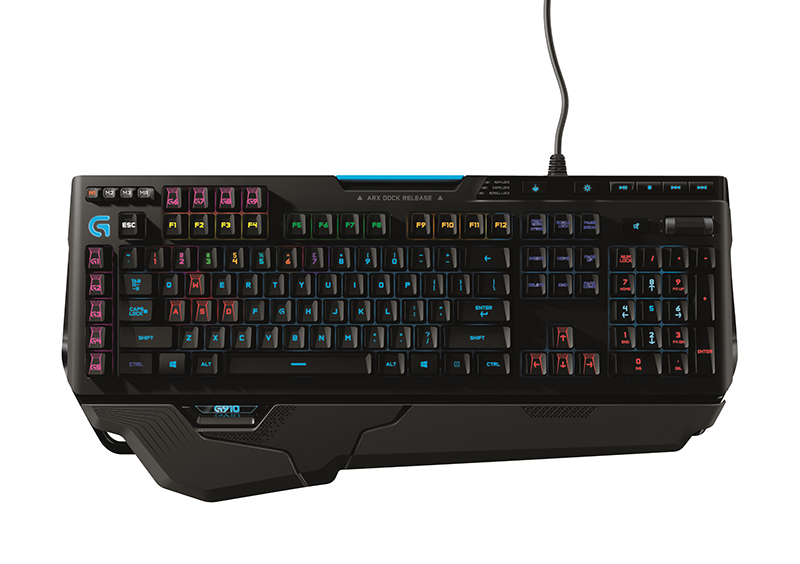 I’m a PC owner for life. Nothing against Mac (I also own an iPhone), but the fact is that when I want to customize something to fit my needs, working with Apple these days is like going to the DMV. With a PC, I can buy a new video card, crack the side open and install the software, and I’m done in 30 minutes max. Not to mention the idea that my case is only as old as what I put into it, rather than what I bought with it at purchase. But that’s just my point of view as a gamer who loves customization. Along with being a PC owner, I’ve seen my fair share of Logitech gear, going from the standard white keyboards and two-button mice, all the way to wireless everything so that I can run my life from my bed. (Running life from your bed not recommended.)

So when the awesome opportunity to try out two brand new items from the gaming wing was offered, I jumped on the chance. The fine crew in the Logitech G series sent us the G303 Daedalus Apex gaming mouse, and the G910 Orion Spark gaming keyboard. Now to be very clear, I’m not a techie, I’m not going to preach to you about the inner workings of either item, nor am I going to take it apart piece by piece until you know how to build one yourself. If you’re looking for that, this isn’t your review. We’re going to look at this from an average gamer’s viewpoint, and whether or not you should spend your cold hard cash on either or both.

Both items are wired in through USB to utilize lighting within both items. The mouse is more for show whereas the keyboard is utility-based. The reason we’re addressing this right off the bat is because this is often the first thing that people see, a sleek black item that I can change to make it glow pink. I will say it was cool to make my mouse look like it breathed as it changed colors, but not as cool as gaming in the dark with full accuracy of where all my buttons were. Which brings us to the next area: how they feel. When I put my hand on a mouse, I have a general idea of what I’ll be utilizing for the two button and roller scheme everyone is used to by now. Logitech refined those and then threw in three additional buttons, two programmable triggers on the left side for your thumb, and a second center switch sitting beneath the roller to adjust sensitivity. So, depending on the kind of game I’m in, I can adjust to the mechanics to make myself stiffer or looser on the guide, and have instant access to different mods at a moment’s notice—a great bonus for first-person shooters and various strategy games.

The keyboard itself is a grand advancement for gamers, as the keys have been molded to fit a gamer’s quick-pace and striking demands. Unless you’re an expert keysmith who has complete knowledge of where your hands are resting, chances are when you’re in the middle of combat, D feels just like F—especially in the dark. Staring down at this keyboard in the pitch black gave me a greater sense of what I was doing. I will say that it didn’t prevent the occasional mis-stroke in the heat of battle, but it did cut out the average mistypes I made while stalking enemies or doing furious tasks. And that’s what makes the lighting setup a fantastic step up, as it isn’t just a pretty addition, it’s a function that serves a genuine purpose. For a bigger perspective on the design, Logitech were kind enough to hook us up with two of the minds behind this tech: Chris Pate (Senior Product Manager – Gaming) and Doug Sharp (Global Product Marketing Manager – Gaming Audio) to go more in-depth over some of the additions. Prior to creating these products, the team had worked with and talked to a number of gamers to determine what they would like.

“We spent a lot of time talking with gamers at shows, we also have multiple different teams that we sponsor like Team SoloMod, Cloud 9, Invictus Gaming in China,” says Pate. “Millennium was one of our sponsored teams for a while. But we have a number of teams around the world that we have sponsorships in, across many different games: League of Legends, DotAa, Counterstrike/CS:GO. So we will talk to them about designs as we’re putting them together, find out what kind of things they want, things they want to do.”

The partnership with those teams and conversations struck up randomly at conventions and events led to the development of a lightweight mouse that was easy to click on the two main buttons, as well as an easy glide control across any pad you may have, giving you the feeling of total control and leaving little to chance. For those who may not like going back to being tethered to the tower, fear not, the cord itself was created to feel like nothing is there and prevents bunching and kinking that eventually kill lower-grade mice. The keyboard was also given an overhaul in precision designed so that a gamer’s fingertips would gravitate to the center of the key, along with an attached armrest set to the right angle so those controls become your controls.

The final piece to the keyboard that stands out are your programmable Gamer Keys along the left side and across the top four function keys. These additional programs help you pre-program macros and other utility functions within the system so that every multi-key function is taken care of with a swift one-off push. Even when I stepped back from gaming, those keys could be programmed into everyday tasks and made some of my daily computing much easier, just to add another level of productivity to the functionality. But of course, gaming was the core focus.

“With the customization for life and the function on the keys, there’s really no limit to what you can do,” says Sharp on the programming side. “We have profiles in the system now as we continue to expand, but if I were to imagine the future with our gaming partners, they’re always making new gaming profiles and designs. And I would love to see what some of my favorite gamers like Sneaky on Cloud9 come up with. I would love to see his World Of Warcraft settings and his lighting setup, and how he has his abilities setup on his board.”

So the ultimate question at the end of all of this: Are these products worth your money? If you believe yourself to be a hardcore gamer (and forget the term MLG for a moment, we’re talking about if you love to play games more than your average WoW player), these are both a must have. Could you do one without the other? Absolutely. While both items work great together, and actually improve different things as a team, they were still just as great when I swapped one or the other out for my old setup. So if you are looking to upgrade your setup, you can snag one now and wait until you’re ready to purchase the other without losing any sleep over the performance issues. In total you’re spending roughly $250 for precision gaming, so now you need to ask yourself—how much are your victories worth?