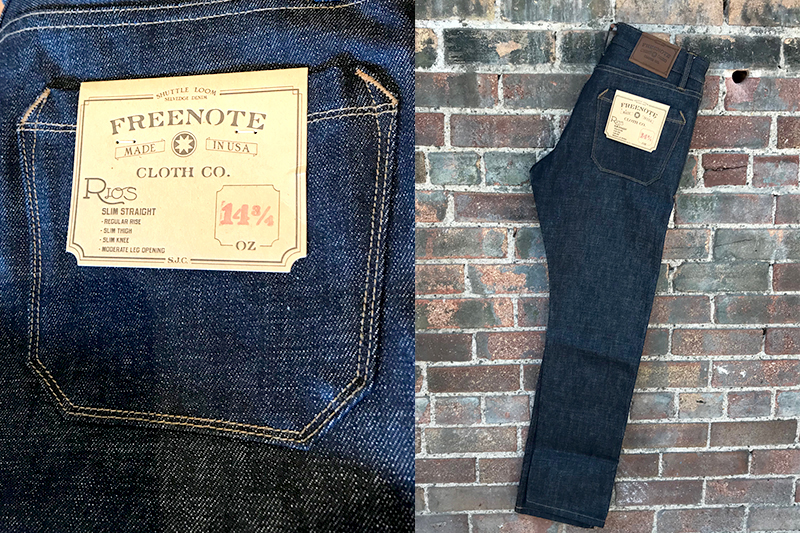 The Rios by Freenote Cloth

When I was a kid in elementary school, my grandpa told me that he and his brothers would get jeans for Christmas. He was born and raised in a small ranching town in Northern New Mexico. He told me that they were grateful solely to receive a new pair of jeans for the holiday—maybe some new socks, too—so they could work and go about their business with the fundamental protection that clothes provide for our bodies. At the time, I had chalked it up to them being poor ranchers, his modest parents clothing their children with what they could in the Christmas spirit of giving, while also outfitting them to aid in the family’s survival. To a large extent, that’s exactly what it was. But in another sense, my great-grandparents likely furnished my grandpa and his brothers with hardy workwear in the jeans they’d gift. After owning and wearing a pair of jeans called the the Rios by Freenote Cloth, I’d like to think that what they wore were as well-made and classically American as these jeans.

Jeans made in the WWII era (veritable predecessors to the Rios) were built to be durable and to withstand outdoor, manual labor—on shuttle looms that are now vintage assets for jean clothiers. These days, amid the pervasion of fast fashion and mass-produced, dispensable clothing (jeans among them), finding clothing at that level of quality takes some digging. Fortunately, small clothing companies like Freenote Cloth hearken to this sensibility of creating jeans and other clothes that are made to last. You can find them in Salt Lake City at my favorite clothing shop, The Stockist, located at 875 E. 900 South.

Naturally, I discovered menswear brand Freenote Cloth at The Stockist. I’m a minimalist, and I loved the simple, classic design that I saw in Freenote’s jeans. No glossiness like that of G-Star or the eccentricities of Diesel—they were jeans. And when I felt inside and out of one pant leg between my fingers, the fabric felt thick, and the texture of the warp yarn (the outer, usually indigo-dyed yarn in jeans) exhibited the garment’s hardiness. Of course, they were raw and selvedge denim. Looking further into the company, I wasn’t surprised to learn that each garment Freenote Cloth produces is meticulously handmade in San Juan Capistrano, California, with attention to every single material they use for their clothing.

Stockist owner Helen Wade connected me with Freenote’s Andrew Brodrick (cofounder with brother Matt Brodrick) for this review. The Stockist’s friendly, attentive staff helped me find the size and cut of Freenote Cloth jeans that worked best for me. Per my experience, the sizing felt and feels pretty standard apropos of what you’d expect from a pair of Levi’s 511s. I found that I liked the straight-leg look of the Rios best; Freenote defines the Rios as their slim-straight cut. For the sake of details, my measurements are 32 x 30, and the denim’s weight (more on this below) is 14.75 ounces. 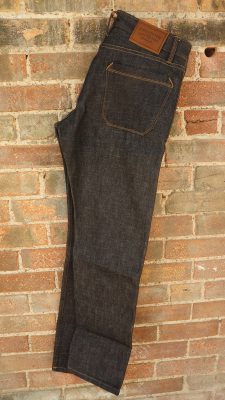 Andrew outfitted me with denim sourced from Cone Mills White Oak Plant (a pillar of selvedge denim since before the turn of the century until the end of last year, when the last Cone Mill plant stopped production) in Greensboro, North Carolina. The devil’s in the details with the Rios—they include copper buttons for the fly, custom rivets on the front pockets, Japanese herringbone pocket bags, flat-felled seams and more. I was on my way. I was excited when I got them—and I still am. I considered changing into them at work, which is where I received them. If you’re new to raw/selvedge denim, here are a couple points to know with respect to Freenote Cloth Rios (you can skip the bullet points if you already know):

Your “first wash” is often kind of like a milestone moment for your jeans and you. That being said, Freenote Cloth and I aren’t obsessed with “sick fades,” as it were—their brand is straightforward, American grit and an obsession with quality. I personally just like the dark, indigo dye of jeans with a minimal amount of fading. The state of being raw denim doesn’t necessarily make jeans better, but it’s often an indicator that the clothier has taken special care as to the quality and character of the denim fabric with which they make a pair of pants. The cardinal rule of raw denim is never, EVER put them in the dryer. Since they’re not washed nor preshrunk in any way, they will shrink down a few sizes if you do. Many stockists and raw-denim proprietors suggest buying a pair one or a couple sizes down, because it also stretches with wear (though, as I mentioned, the Rios’ size 32 was on point per my normal size). Washing raw denim in the washing machine can also limit fades, so handwashing and joining the Church of Woolite are encouraged.

For my journey with the Rios, I decided that with daily wear, I’d go for four months before I washed my jeans. I committed to wearing them all summer, and I figured that six months might have been overkill and too heavy on the fade. Here are some notes from each month of wear.

Despite being on the lighter side of the weight spectrum, the 14.75-ounce denim felt thick and heavy. This wasn’t a detractor in the slightest—they feel like durable, built-to-last jeans, the only pair you need, your jeans. Because raw denim stretches, waist size 32 was snug on me at first. In the ballpark of a week to two weeks, the Rios had broken in, and they felt like any other pair of jeans during normal activity. I was on cloud nine wearing them out on the town.

The comfort level felt like it had continued on at the one-month marker. At this time, I was riding my bicycle in my Rios to break them in further. It was a little rigid at first, particularly at the waistline, but I knew that they’d continue to give. Other than adjusting to my body, they still looked and felt like brand-new, which I love.

This is when indications of the Rios’ fade began to show. Previously, I’d done guesswork for how the fade would look by identifying where the Rios made creases in response to my body. It was also the point at which I busted out the Downy spray to mitigate some odor, which did the trick. At this stage, I felt completely used to the weight. Their journey this far to being minorly faded formed a stronger bond between a boy and his pants as well.

My fade became clearer here, but I felt impressed at how dark the Rios still looked overall. I would never do real, physical work in these—though I could, since they’re designed as real workwear jeans—because they are a high-end piece for me, and since I don’t need to perform intense physical labor, I’d rather preserve these jeans the best I can. But I did get to test them out in an outdoor situation. I was filming a music video in Reese, Utah, which is about 11 miles west of Ogden, close to the Great Salt Lake. There, I rode my bike on dirt, chasing bulls. The dirt that kicked up as I rode got on my pants, but it never seemed to saturate it, visually. I felt like this was a fair test of the Rios’ resilience, and my Freenote Cloth jeans came out virtually unfazed—nothing patting the pants while on my body couldn’t take care of.

A slight “indigo rainbow” is how I’d describe where this pair of Rios got to as far as the fade goes before I washed them. The honeycombs behind my knees were more subtle, whereas the whiskers in the lap area were more pronounced. The whisker fade seemed to have more distress on the fabric, rather than seeming like soft impressions of a lighter blue. In any case, my Rios felt as meaty as ever. I cuff my jeans, and the only time I raised an eyebrow was when I unrolled my cuffs. I noticed that there was some damage at the folds from either cuff, which looks like a cut, almost, in a straight line. After some research, I learned that cuffing raw denim will inevitably damage the fabric in this way, and that some embrace it as a beautiful imperfection that’s intrinsic to the breaking-in process.

As is recommended, I hand-washed my Freenote Cloth jeans (with Woolite—always Woolite) and hung them to dry. As I mentioned earlier, I’m not big on crazy fades, and I’d feared that the resulting fade after washing would be too much. It wasn’t. After washing, the fading looks like accents of a lighter indigo, a more set “indigo rainbow.” Even the pocket area where I put my iPhone is subtle. Other than the low-key fade and the distress from the cuffs, the jeans look and feel like they did new.

When it comes to Freenote Cloth, less is more—a lot more. Their classic designs ensure that the longevity of their clothing relates not only to their durability, but that of style as well. Now that I’m completely sold on their pants, I want other items from them—they make woven and knit shirts, chinos, jackets, board shorts and more. Each item upholds Freenote Cloth’s attention to quality and classic style design.

The Rios ($230) and other Freenote Cloth clothing aren’t cheap—and they absolutely should not be. Garments from Freenote are small investments in jeans, et al., which will last for years to come if cared for properly and with love. My philosophy for any kind of jeans is to treat them like raw-denim jeans, and they’ll last longer. While this is true, I get about a year out of a pair of 511s, and the wear takes form after just a couple months. at this point, I can already tell that the difference with the Rios is substantial. Additionally, Freenote Cloth helps me with my goal to maintain a capsule closet and value my clothes, by way of the brand’s penchant for well-made, durable product. If you acquire jeans by Freenote Cloth, I’m sure that you’ll strengthen your sense of the value of your clothes to you as well.

I still own and consistently wear all of my clothing from The Stockist, the oldest of which dates back to when they first opened (when they were called Fresh). It’s a boutique store, and as such, they carry clothes from brands that are not only fashion-forward but also timelessly stylish, sturdy and built for longevity. Their offerings compel me to take good care of what I purchase from there, as I like each piece that I carry out the door. Their selection comprises clothes that will stand the test of time and are worth a small investment, with Freenote Cloth’s Rios among them.

To boot, Freenote Cloth zealously supports local shops like The Stockist. The Stockist carries multiple products from Freenote, and curates a wide range of chic pieces to add to your closet. For the Rios and much more, head to The Stockist for seasonally rotating clothes and accoutrements. As the temperature starts to ease down, now is the perfect time to start breaking in a pair of hardwearing Freenote Cloth jeans.