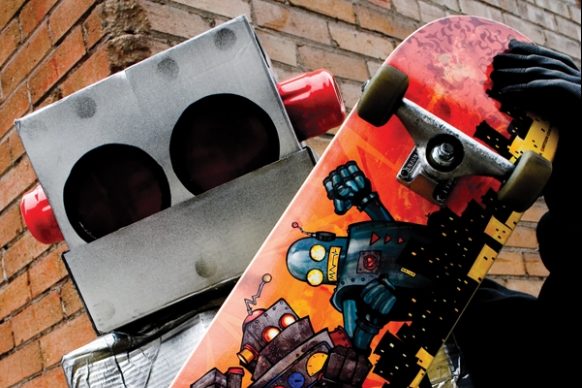 Sway Boards
Kill Bot vs. No Love Board
[email protected]

I got this deck the day after I had watched The Iron Giant.  The graphic was perfect:  A robot battle in the midst of a big city.  I was so keen on it, in fact, that I had serious indecision when it came down to actually skateboarding on it.  But it skated well.  This is the newest addition to the Sway Boards line by local artist and skater Manuel Aguilar (I heard he delivered it to the SLUG offices wearing a robot suit).  The board is 7-ply maple and skates pretty well.  With the size being 7 ¾” it’s not for those skateboarders with clown feet and big beer bellies.  You will need to be light footed and have a small beer belly (like myself).  Two weeks later, it still has pop, with no signs of letting up.  Pretty cool.  Check out Sway Boards on Facebook. –Ryan Sanford

Brixton
Lewis Long Sleeve & Debaser Jacket
Brixtonltd.com
When the cold starts nipping at your heels, it’s always a commodity to have a nice new long sleeve and jacket to stay warm with. The Lewis long sleeve shirt is a classic. Heather gray body and colored sleeves wrap your torso and arms with the softest touch and keep you comfortably warm while you are out and about during the winter months. One fabric that will never let you down when it’s cold out is wool and the Debaser doesn’t disappoint. The shell is all wool, with fancy anchor buttons, and the inside is lined with black satin for that classy touch. The Debaser jacket is almost too classy, in my opinion, to rock when you go out skateboarding when it dries up enough to do so, it’s custom tailored fit is a bit constrictive even for most tastes. Although, with a hidden breast pocket, a flask is a great addition and assistance in staying warm enough to brave the elements. Check out Brixton’s website—they have plenty of other stuff that can keep you toasty enough to want to stay outside. –Adam Dorobiala 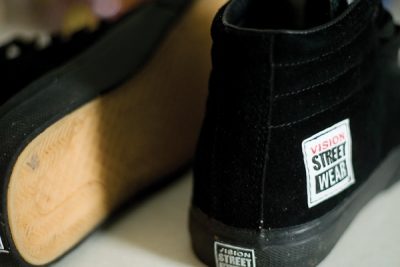 Vision Street Wear is back and just as awesome as when they first started out. I feel like I could show up to any bowl in the nation with these puppies on and have instant respect from all the elders, not to mention tear some shit up. The Suede Hi’s are the epitome of skate shoes in the 80s and they are just as prevalent today.  The shelled toe repels wear and tear while the strategically placed ollie guard does its best to keep your feet from ripping through the sides. They are extremely functional as well as super comfy and it feels like you are wearing nothing at all. If you aren’t into the whole retro kick, head over to their website and see all the modern takes on classic shoes. –Jonathan Livingston

Celtek
Tranquility Facemask and Mitten
Celtekclan.com
Long ago I accepted the fact that while snowboarding my hands would go numb. Regardless of the quality of gloves I rocked or the liners underneath, it only took a few runs until I couldn’t feel my fingers. Then came the Tranquility Mitten. These gloves kept my hands toasty warm and super dry, even in frigid 4-degree weather, when my other gear began to fail me. The bright white color looks super fresh, especially with the black peacock feather design. The compliments on how rad these gloves look haven’t stopped coming since I got them. The aqua facemask (which doubles as a headband––total genius!) features matching peacock designs in purple. It’s long enough to tuck into your jacket and since it’s made of nylon mesh it’s breathable, doesn’t freeze up like a cotton bandana does and looks a million times better. On real cold days rock this one in the hair though, I found it to be a little drafty for my taste. –Jeanette Moses

Ifrogz
EarPollution Timbre with Mic
Ifrogz.com
Named after the musical term for tone quality, the Timbre earbuds do live up to their namesake. Fashioned with wood chambers, these mini speakers deliver crisp treble and clear bass in the right spot—my ear canal. Attached to the cord is a tiny, high def mic making it easy for us iPhoners to switch between calls and music. I gotta say it’s pretty fun talking to your friends with this hands-free device and hearing their voice in clean stereo. Timbre takes the best elements of the Apple and Skullcandy earbuds  and fuses them together with  state of the art sound. Like the Skullcandy earbuds there are three earfit pieces included so that you can easily find a comfortable fit. This feature is ideal for someone like me who has conch piercings in the inner cartilage of their ears. Without this sizing option I would have a tough time positioning the sound chamber in a comfortable and audible position. –Emma Smith

Skeightfast Dyephun Vol.1 by Victor Giannini
[email protected]
Comixpress.com
“It’s a work of pure love, obsession and total madness,”says Victor Giannini. I would have to agree. 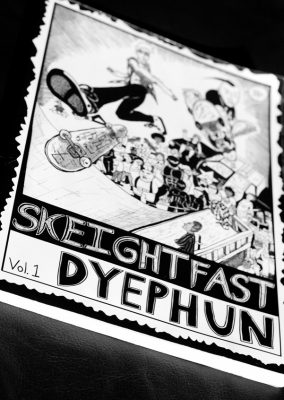 Giannini’s hand-drawn comic book Skeightfast Dyephun is an epically wild adventure about how two derelict skate rats, Mikey Sptiface and Boardlord, get caught up in ancient conflict between battling ninja clans to protect a secret spell that harnesses eternal life. The spell is inscribed on the bottom of a skate deck that is given to Boardloard by the local shop owner, Henry, who is supposed to be the protector of the spell. When the Seven Demon Hearts Ninja clan gets word of this they track down Spitface and Boardlord in an attempt to steal the board and harness its powers. The ninja clan wreak havoc in the city, killing anyone in their path, including an onslaught of cops as they hunt down the skate rats. The illustrations are hilarious and the story outrageous. I enjoyed every page, all the way to the climactic, to-be-continued end of the book when the foolish Demon Heat Clan raises the dead. Ninja assassins, ancient super powers, skateboarding and zombies, what more could you ask for? –Chris Swainston