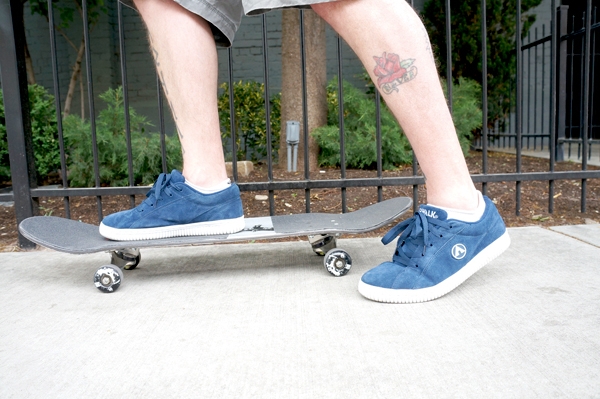 The One by Airwalk

Aggronautix
Milo of The Descendents v2 Throbblehead
aggronautix.com
This thing sets my nerd boner flying off in all sorts of directions. First of all, it’s Milo, the frontman of the legendary Descendents, one of my very favorite bands of all time. Secondly, it’s limited and numbered out of 2000, appealing to the side of me that hoards records and comic books like they’re actually valuable and/or interesting. Thirdly, it just looks really fucking cool. The Throbblehead line of bobbleheads from Aggronautix specializes in recreating iconic figures of punk rock in tiny, bobbly form, and, just like the others, this Milo figure is well sculpted and sturdily built—it totally looks like Milo. I’m also glad that this second version of Milo is entirely new, featuring no recycled parts from the previous Milo Throbblehead, which has been sold out for years. One minor bummer: the packaging of this Milo figure doesn’t feature the transparent plastic window that previous Throbbleheads had, meaning that you’re gonna have to take it out of the box to see it … but I guess that’s kinda the point anyway. If girls weren’t already impressed by the Keith Morris Throbblehead and Dr. Doom figurine perched atop my record shelf, surely my awesome new Milo Throbblehead is gonna help seal the deal. Keep up the good work, Aggronautix. –Ricky Vigil

Airwalk
The One
airwalk.com
I wore through my fair share of Airwalk shoes in the late ’80s/early ’90s, just like most other skate rats of that period. About the time I gave up skating, Airwalk shoes seemingly went “out of fashion,” and ended up becoming Payless Shoe Source’s feeble attempt at catering to skateboarders. Unbeknownst to me, however, Airwalk has been continuing to make quality shoes, and the recently re-issued The One definitely shows that they still know how to offer up solid kicks. The One is a simple design and is one of the most comfortable shoes I’ve ever worn. They’ve handled everything I’ve thrown at them––skateboarding, bicycling, drumming and more––and haven’t even begun to fall apart or show any signs of weakness. The re-issue is a beautiful blue suede, and since they’re a limited edition, do yourself a favor and order a pair or five––you won’t regret it. –Gavin Hoffman

Fairdale Bikes
Pannier Skateboard Rack
fairdalebikes.com
Since I’ve started skating again, I’ve noticed quite the crossover of skaters who ride bicycles and vice versa. Fairdale Bikes has picked up on this and created the ultimate skateboard transport tool, and it’s pretty much fucking amazing. Their brainchild––the pannier skateboard rack––is super-affordable at around $45, and fits almost any existing bike rack. I’ve been to and from quite a few places on my bike with my deck in tow on this rack, and it’s a genius device. The only flaws are the Velcro straps, which can easily break depending upon placement, and one specific corner on the rack that rubs against the griptape on your board in such a way that the rack coating wears away a little. Those miniscule irritants aside, this sucker is an excellent rack, and will be traveling with me for many summers to come. Check out this rack and a ton of other awesome goodies, including their new bike/skateboard collab with Roger Skateboards, on Fairdale’s website. You’re welcome. –Gavin Hoffman

Nyko
Raven Wireless Controller (Alternative) PS3
nyko.com
Nyko clearly designed the Raven with long-term play in mind as it is perhaps the most comfortable controller I’ve ever gamed with. Even though I’m used to having Sony’s DualShock 3 in my hands, the alternate layout feels natural and accessible due to this controller’s compact, hand-fitting design and reassuring weight. Its slip-proof matte finish is applied to the shell and the trigger, which is thinner and more responsive than its Sony counterpart. The Raven also has a switch on the back which reverses the inputs for the triggers and shoulder buttons, an answer for those who struggle with games that default to the shoulder buttons for aiming and firing. Unfortunately, the shoulder buttons feel weak and unresponsive. By the time you figure out where, exactly, you have to press them to get them to work reliably, you may have already switched them to the more appealing triggers. Additionally, the Raven’s extremely sensitive analog sticks frustrated my attempts to perform more delicate in-game maneuvers. However, most games will allow you to tone down camera sensitivity, which will mostly eliminate this problem. Nyko’s Raven runs around $20 cheaper than Sony’s proprietary hardware, and despite its minor quirks, it’s worth using for those who like to game in comfort and style. –Henry Glasheen

United Artist Network/Jedidiah
Leather Man T-Shirt and Jamison Tank
madeforgood.com
You know that feeling when you see clothes you want, but you know you won’t buy unless you buy them then and there, so you buy them and feel guilty for spending money (until you wear them)? Now, you can circumvent that guilt by purchasing clothes from United Artist Network, where a portion of the product’s cost goes to programs that support artists directly. Various artists procure prints for these T-shirts—mine depicts a ghost punk that allows me to wear my punk rock heart on my short-sleeved shirt without having to take the time to put studs on my vest. The shirt has a fitted cut that flatters my otherwise emaciated body and is soft like puppy fur. In a similar vein, Jedidiah creates clothing in conjunction with partnering non-profit humanitarian causes to help those in need. Get the goods, and good karma will manifest in how good you’ll look. The Jamison is a summer staple: a blue tank with a subtle stripe pattern and a barely noticeable Jedidiah logo on the left pectoral area that looks like a crest with a hospital cross within. The most snazzy element of this tank is the dual buttons in the center of the garment, which lend it a dapper look that, and, at the same time, allow you to stay cool in the summer heat. This shirt’s fabric is also soft and light, which will let any breeze right through to your skin. You can pick up these products and more at madeforgood.com. –Alexander Ortega