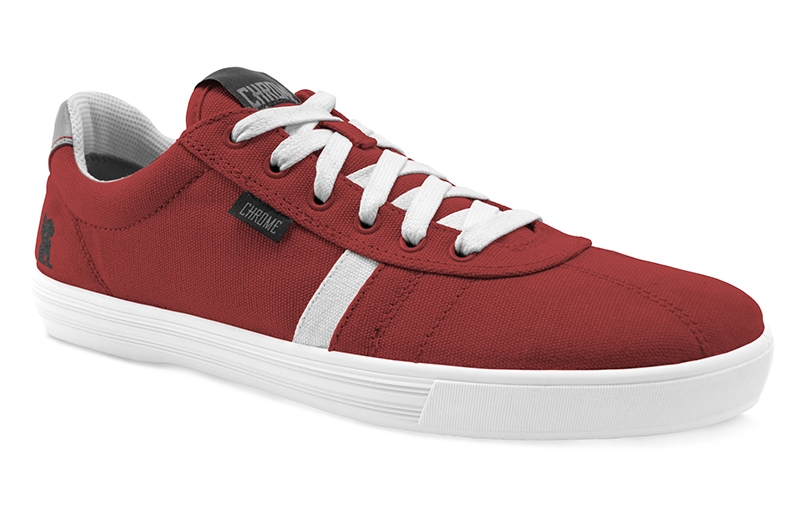 Chrome Industries
Forged Rubber™
Timur Sneakers
chromeindustries.com
Chrome’s always on point, and the Forged Rubber™ Timur Sneakers are no exception. Chrome’s website says that they craft these shoes by hand with the aid of “70-year-old machines [they] salvaged from Slovakia,” and I believe ’em—they’ve provided me with durability I didn’t think possible in a sneaker for my pedestrian commutes all around Downtown. I’m pretty hard on shoes, but their seemingly indestructible vulcanized rubber (purportedly at 300 degrees) has given me solid hope that I can wear these through the oncoming winter. I took them on a hike up Millcreek, too, and though they could benefit from a bit more arch support with the interior in that context, they sure as hell proved that they are built to last. The website says that they should be water-resistant, but mine leaked water in through the back portion of the sole when I stepped into the creek. They were a little stiff initially, but I was happy to break them in, seeing as how the rigidness evinced the quality of the materials. My pair boasts slick, black “fire hose” canvas with a red stripe on each shoe, which breathes well and looks stylish—it’s rare to find a shoe with the utility of Patagonia and the simple, fashionable design of Vans, rolled into one. The Timurs also include an “antimicrobial sock liner for odor resistance”; my feet aren’t the most fetid in the world, but, nonetheless, I’ve noticed that it significantly cuts down on any retained foot smell. At $85—a fairly standard men’s sneaker price across the board—the Timur Sneakers are a steal. –Alexander Ortega

Enjoi Skateboards
Art Classics series
enjoico.com
The Art Classics are Enjoi’s newest series of skateboards. I got a chance to skate the Louie Barletta model, titled “mona louie” after Da Vinci’s classic portrait. The deck features the skateboarder’s face transposed onto the Mona Lisa’s. What’s odd is that there is some overlap between the famed sitter and Barletta, not so much in facial features but in essence. The deck itself skates well. I sent it into some ledges, and although it dented, it did not chip. I also did some exaggerated back-lips on a small downrail trying to snap it, but to no avail. The deck is light, and the concave and pop will meet the specs of a guy who skates the kinds of things I do—a little bit of this, a little bit of that. Others in the Art Classics series include Jose Rojo’s face transposed onto Mexican Revolutionary leader Emiliano Zapata from the iconic photograph; Nestor Judkins’ face replaces that of the goddess Venus in Botticelli’s Rennaissance classic “Birth of Venus”; and Wieger van Wageningen as Michelangelo’s “David.” You’ll probably scrape the graphic away in one session, but it’s fun to have nonetheless. Nurture the arts! –Jordan Deveraux

Huf
Dylan
hufworldwide.com
The Dylan is the perfect go-between from casual to classy in shoe wear. Angel-tip-style stitching in the front (with the “tip” tucked under another layer of full-grain burnished leather) lends these sneakers a dressy feel, but their matte-black color, “burnished black,” renders these kicks the perfect first-date shoe: slick enough to show that you got game, but understated to the point where it looks like you put ’em on in the morning without thinking twice about it. The $120 price tag leans more toward the former designation, but the Rieders’ sturdiness proves that—as with each Huf product I’ve tried—high-quality clothing is well worth the investment, style- and longevity-wise. These shoes were a bit of a travail to break in, but once they did a couple weeks later, they were like leather driving gloves gripped to my feet. They’re definitely fall/winter shoes, as rockin’ them in the summer was a bit too hot, but I’m becoming increasingly grateful for their heat insulation since we’re well into autumn. The elastic fabric that connects the tongue to the inner sole (beneath the insole, often found in skate shoes) makes for a bit of a meticulous time when putting them on in the morning rush … but feeling this fresh, I hardly even care. –Alexander Ortega

Sol Republic
Tracks AIR
solrepublic.com
I’m 100-percent for marriage equality—so much that I think that I should be able to legally marry these headphones. Like, if I were the kid in the Cap’n Crunch commercial, and the other kid said, “If you love it so much, why don’t you marry it?”—but if the cereal were actually these headphones—I’d kick her, and then I’d say, “I am.” They’re wireless, enabled by Bluetooth, and, after a quick charge (only about 10 minutes), they paired with my phone with a click of a button and a device selection in my iPhone’s Bluetooth menu. The efficiency of this product is almost egregious—I run around the SLUG office every which way, grabbing documents to edit, and I now don’t have to carry my phone with me if I’m in Headphone Land, concentrating on a task and blocking out Poliça. Should one risk lessening crucial audial traffic signals—as I am wont to do—while cycling, they make for an absolutely perfect music-listening accessory when beating a red light, pedaling to Dawnbringer. Sometimes they cut in and out in this context, but it’s an infrequent inconvenience. Be sure to turn your phone’s Bluetooth off before you pair with your computer’s Bluetooth, as the headphones stay paired via the first-established connection to a device. While paired with a phone, though, answer/end calls with a button; while music is playing, quickly hit the same button once, twice or three times to pause/play, skip forward or go back, respectively. They insulate sound and block out outside noise well, to boot. Pound for pound, these are the best headphones I’ve ever owned. –Alexander Ortega

Underwater Audio
Swimbuds + Waterproof iPod Shuffle Bundle
underwateraudio.com
I’m a fan of the iPod Shuffle with its clicky buttons, and if you ask me, there’s nothing better than a finely tuned, 88-bpm playlist clipped to your collar when spinning up Emigration. Music improves the running or cycling experience, but I’ve drowned a Shuffle or two in the rain during my bike commute. So when it comes to swimming, no music always meant an hour of gurgling monotony … until today. Underwater Audio’s Swimbuds iPod Shuffle kit ($165) makes me want to swim. It sings a siren song that lures me along for another lap, and it tricks me into kicking on the beat for faster splits. Since I swim with goggles, it’s easy to clip the Shuffle to the rubber strap and wrap its short wires to take up slack. The in-ear speaker plugs keep water from flooding my ears and killing the sound, and a little Vaseline on the earbuds improves their seals (the plugs must seal to work well). The stiff buttons don’t clicky click like an unmodified Shuffle, but that’s a small price to pay for aquatic bliss. UA claims that the buttons will break in with use. Don’t expect crisp, bell-tone highs and thumping bass underwater —you will also hear plenty of sloshing and straining as you swim, so expect ambient noise to seep into your audio bubble. Buy this kit if you swim once a month—you’ll likely swim more often. –John Barkiple