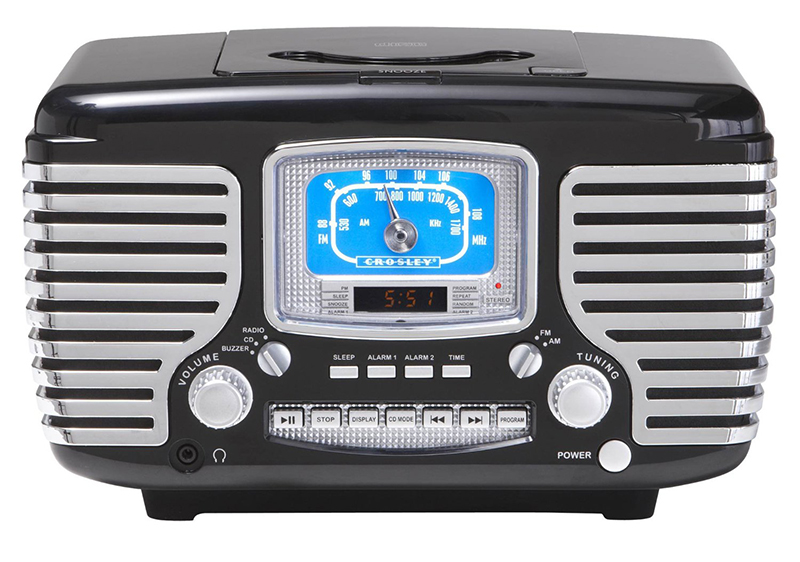 Blue Microphones
Yeti Studio
BlueMic.com
One of the biggest drawbacks to being a Windows user in a podcasting era is that most audio software will cost you a pretty penny. Mac users automatically get GarageBand as a throwaway app while you’re stuck paying $900 for Pro Tools. Blue Microphones has decided to help the PC users get in the game with an affordable option in Yeti Studio, combining one of their most popular mics with the PreSonus Studio One recording software. At its core, you’re getting a USB microphone and a recording/editing/mastering program in one package, essentially giving you all the tools to record and create a podcast in a single box, as opposed to buying five different pieces of equipment. Like any USB mic, the Yeti does have some drawbacks to quality compared to an XLR mic, but those can be ironed out with the software. The software itself will take you a minute to navigate and learn, as it operates quite differently than its major counterparts, but the final product it creates is on par with private studio recordings. If you’re looking to do podcasting on a budget, this is the way to go. –Marcus Wiley

CLIF
CLIF Bar Seasonal Flavors
clifbar.com
Winter-holiday-flavored foods (of the U.S. Anglo variety) are something that white, middle class yuppies (myself included) anticipate year-round. CLIF’s line of seasonal flavors are no exception—they’re adding Iced Gingerbread, Pecan Pie and Spiced Pumpkin Pie to the holiday fray this season (Peppermint Stick will have to go on next year’s Xmas list). These bars excited me from the get-go, since I always like to keep a few at hand for when I regretfully skip breakfast. I was eager to try them out. Upon first inspection, these bars all have the familiar CLIF Bar vibe: sweet, somewhat chalky and homogenous consistency. I tried the Iced Gingerbread first and, though I was wishing for headier molasses notes, it delivered a slightly sweet, satisfactory ginger bite. The Pecan Pie bar had the right flavor profile for its namesake, but was missing the welcome crunch of whole, roasted pecans that you’d find in a real pie. Pumpkin spice seemed like it would be the easiest to translate into CLIF bar form and, despite my hopes for a stronger flavor, it was successful. At a mere $1.39 each, these seasonal options are certainly healthier for you than their actual equivalents, though not nearly as satisfying. Find them anywhere you normally find CLIF Bars. –Christian Schultz

Crosley
Corsair Radio
CrosleyRadio.com
When the Corsair Radio came in the mail to review, my nostalgic heart was swept away. This is a radio that looks like a jukebox and a ’57 Bel Air were molded together to make a fine audio player. Now, let’s get to the basics: it’s a AM/FM radio with a CD player and digital clock built in. That’s it! There are no WiFi/MP3/Airport options to this player. Many moving in a digital age would look at that as a con, but this player wasn’t designed for those people in mind. This player was made for people who just want to listen to music or the radio without having to spend five minutes shuffling through options. The audio setup makes up for modern features alone with a clear tone that even makes static sound great. It’s quick, it’s sleek, it’s efficient and it’s beautiful. This is a radio that’s meant to sit in a living room for listening pleasure, or sit in the garage while you work on something and need some audio in the background. The $100 price tag may make you cringe a little, but understand you’re not just paying for use, you’re paying for design and nostalgia, which, to many, is worth every penny. –Jason X. Andrews

Crosley
Patriarch Record Player
CrosleyRadio.com
It truly doesn’t matter which side of the “vinyl is back/no it isn’t” argument you’re on—the truth is that there will be fans of vinyl until the day comes that it can’t be produced anymore. So for the collector or listener who wants to go back a couple of decades, Crosley has made an entire series of players that cater to the aesthetics and needs of an audiophile. For those looking to find an all-in-one system, the Patriarch Record Player is probably your best bet from their lineup, complete with an AM/FM radio, connection for an MP3 player and CD player for people who still love to collect compact discs as well. Aside from the wooden cabinet that helps make it a centerpiece in any room, the real quality comes from the sound, which is crisp and clean and makes even the most worn-in record sound great. The only major downside is the needle and arm, which feels heavier than most player arms and, if not handled correctly, could damage some records. The Patriarch is a fantastic player that’s super cheap at $179.95 and doesn’t require a ton of setup to make it a part of your home, but seek out experience in vinyl care. –Spencer Ingham

CamelBak
Forge
CamelBak.com
We all know CamelBak makes hydration easy when you are on the go, so it is no surprise that the Forge Mug allows you to get caffeinated on the fly. CamelBak went all out on this travel mug, from a no-spill top to it’s double-insulated, vacuum-sealed 16 oz chamber. I can pour piping-hot coffee in my Forge at 9 a.m. and it is still warm when lunch rolls around. The self-sealing cap protects you from spills and leaks, for the most part. I have noticed that when you release the seal lever too soon, coffee will build up and leak down the back of the mug. You can also unlock the seal arms to allow for venting and constant drinking. Cleaning is a breeze, even after a hard day on the job. Pop the seal-arms up and you will be done in no time. Multiple colors are available, two size options and an impact-resistant base makes it safe to bet that you won’t be disappointed with this mug. Pick yours up for about $30 online at CamelBak.com. Over the course of one year, you will have saved somewhere near 250 disposable cups from being tossed in our landfills. –Granato

Jaybird
BlueBuds X
JayBirdSport.com
When it comes to earbuds in active life, one of the biggest issues you have to deal with is the inevitability that the buds themselves will die quickly from use. Even for people who are just jogging, your average pair that come with a phone or MP3 player were made cheaply and not meant to last any longer than the product you purchased. This issue has helped the Jaybird line stand out with athletes as their designs have been built to withstand grueling physical tests for those training or working out. The BlueBuds X are one of the finer pair of Bluetooth buds on the market, complete with adjustable foam inserts and various sizes for in-ear comfort and stability. The two downsides are minor but noticeable: The volume control has a limit that won’t allow you to blast music, and the voice command doesn’t respond frequently, making phone calls troublesome. Overall, they function well and can take a beating in a workout while you move, are easily chargeable with a USB hookup, and look mighty sharp compared to having a dangling cord wave around and eventually short out. Well worth the $170 pricetag. –Sean Poorman

Ultimate Ears
UE 900s
UltimateEars.com
The original Ultimate Ears 900 were at the top of their game when they came out a few years ago, giving people one of the best sounding earbuds I had ever listened through. So, when the 900s series was announced, I was curious on how you improve something that already beat every earbud I owned over the past decade. The first surprise was to find six rows of adjustable foam inserts, so no matter what size your inner ear was, you could find a form that would be comfortable—not to mention a bottle of Deoxit to help clean the buds, which was a lacking tool in the last pair. The audio itself has been improved with a three-way crossover that brings out the best in the highs, mids and lows, no matter what you may be playing. The only downside that these buds have is with the audio you’re listening to—meaning that if the podcast, MP3 or YouTube clip you’re hearing was made with poor quality, you’re going to hear it quickly, as the buds highlight poorly downloaded or constructed audio. If you’re an audio snob, these are a must-have, especially for people using them with phones. –Gavin Sheehan

Yantouch
Diamond+ Bluetooth Speaker
yantouch.com
Plop this unassuming black diamond globe on a shelf in the corner of your room, pick your favorite slow jams, select the proper color setting for the mood you’re trying to create, and enjoy the light show. Right out of the box, this speaker was a breeze to figure out. It took a few hours to get its initial charge, and then it paired with all three of my Bluetooth-capable devices instantly. Use the provided audio cable to connect a record player or laptop. The Diamond+ boasts a seven-hour battery life, but with the option to adjust the lighting intesity or run sound without the lights, battery life will vary. The mono mode allows you to toggle through eight solid color options, a flow mode loops through all eight colors, three tempo light modes move to the beat of your tunes, and a rainbow light mode showcases all of the colors. Once you download the Bed Time Social app, you can set sleep times, alarms with custom playlists and control everything else. You will still want to keep that remote close because once the Diamond+ is powered down via the app, you will need to re-link it to your phone. The Diamond+ retails for $149 and comes in two color options. –Granato

Zippy Dynamics
Sparky Suit
zippydynamics.com
Jack is a trooper. He loves running on ”the trail” with Dad or just going on hikes and walks. Always eager to get out the door, we wonder if he stops to consider the elements—temperature, wetness, etc. ’cause he doesn’t really seem to think about the getting-dirty part. Enter Zippy Dynamics. Truly “luxury for your best friend,” this is a track suit for dogs—this model is called the “Sparky.” It’s nicer than any windbreaker or track jacket I’ve ever owned personally, as it touts a soft, red-and-white-striped liner and durable fabric for the outer shell. There is only liner at the front and back areas where the legs meet the dog’s abdomen, which allows breathability and flexibility. Despite Jack being an avid trotter, he’s a bit of a couch potato at home, so he wasn’t so inclined to put it on, though the garment itself is easy to put on a more willing canine: Simply put in the front legs, put in the back legs, fasten the zipper from the hind to the neck, then zip up the legs for a taut fit. Don’t worry—the dog’s potty parts aren’t covered. Being that this Sparky wasn’t necessarily sent with Jack in mind initially, however, it didn’t quite fit (it was too tight), but that’s not Zippy Dynamics’ fault. It’s a medium and he’s a Standard Schnauzer. They warn that their guide isn’t exact, but I think a large would have been too big. With precise measurements, dog owners should be able to find suitable sizes and fashions! –Honk Carnie