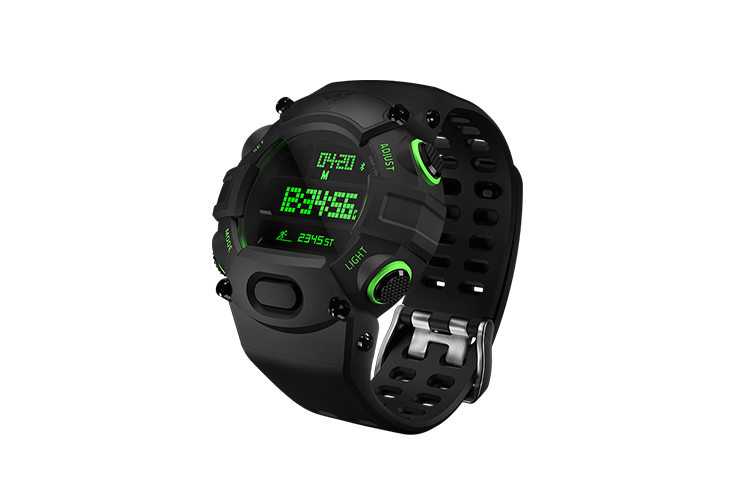 I was curious to try to new Nabu Smart Watch not because I was interested in the latest piece of portable technology, but rather because I wanted to get back into shape. I had been an active distance runner for many years. But a cumulative series of conflicts and emergencies had broken me out of my healthy routine, and diminished the quality of my everyday life. It seemed that having a personal trainer of sorts on my wrist would go far toward helping me return to my healthier habits.

At first glance, the Nabu smart watch offers a variety of attractive features. Foremost, the bold design of the watch is undeniably eye-catching. The matte black body is extra-chunky, though surprisingly lightweight, and accented by bright-green details that suggest an apparatus run on nuclear power or kryptonite. At the very least, it would be impossible for such a watch to go unnoticed, either by others or the watch’s wearing. The point is that the watch constantly reminds the owner that they ought to be exercising, or at least preparing to do so.

What appears to be an advantage—the watch’s obstreperousness—soon turns out, however, to be a liability. As a smart watch, the Nabu not only tells the hour and functions as a stopwatch, but it also hooks the user into the digital world. A downloadable mobile app permits the watch to monitor the user’s paces and the number of calories burned over the course of a given. While this data perhaps offers helpful motivation, the watch’s sexier features (and its ostensive selling points) I found to be unhelpful.

The most obvious of these is the watch’s interface with the user’s social media and email accounts. For me, one of the great joys of distance running was the blissful freedom of unplugging from the Internet and possibility of losing oneself in the sounds of the environment or whatever music one chose to play on headphones. In a day when most music we experience is relegated to the status of background or white noise, running was a welcome opportunity to commune with my favorite artists as I once did. And because this reprieve was so precious to me, I greatly lamented to demise of the gloriously simple iPod. The Nabu, in quite contrary manner, instead continuously alerts the user, through both sound and vibration, of any incoming digital messages, most of which we know to be of negligible interest. The result is that the watch hardly focuses the user’s attention on exercise but rather serves as a constant source of distraction, if not outright annoyance. Such is particularly the case when one removes the watch after working out and then is constantly interrupted by its incessant beeping and chirping. Soon after opening and charging the watch, I found it exasperating.

One could certainly object that such features could be turned off, but I would counter the object on two points. The first is that such features are the very reason for buying the watch in the first place. Without them, one may as well have a Timex, which costs only a fraction of the price. My second point is that the watch is unexpectedly difficult to set. I spent at least 30 minutes struggling to set the chronometer alone. Not only are the watch’s function buttons counterintuitive, but they also seem to be relatively unresponsive to the touch. In trying to work the watch, I frequently found myself wondering if I was pressing a given button too forcefully or too gently, or holding it for too long or too brief of an interval. This frustration was compounded by the fact that the numerical chronograph display is surprisingly dim, nowhere near bright as the distracting Facebook updates offered by the watch’s digital interface.

Others may find the Nabu to be an exciting and beneficial addition—if not to their workout, at least to their wardrobe. But I must confess that I discontinued using the watch the moment my broken iPod was repaired. In short, losing the Nabu and going back to my old routine has encouraged me to run more regularly, primarily because my work is more enjoyable when I do it in tranquility.

The Razer Nabu smart watch is available for purchase at $149.99.