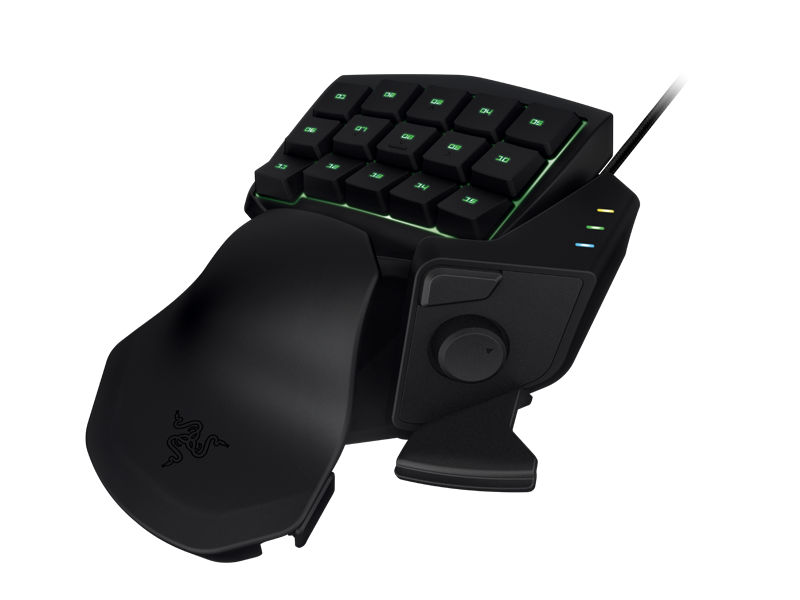 The Tartarus is a keypad designed specifically for gaming; it works as a type of extension of the keyboard, but it’s more ergonomic. It features 15 keys in rows of 5, a space bar trigger, an alternate ALT key, and a palm/wrist rest that curves to fit the shape of your hand. The 15 keys can be programmed however you choose and are labeled for your convenience. There are designated WASD keys, but they can be changed. The Tartarus is the less expensive version of the Orbweaver, which features 20 programmable keys and mechanical switches. I actually prefer the non-mechanical switches on the Tartarus as it makes pressing them much quieter. I also prefer the 15 keys instead of the 20 because I can’t imagine that it would be comfortable or easy to use all 20 keys unless you had gigantic hands. The palm/wrist rest is slightly adjustable, featuring two or three positions, which is its only downfall to its predecessor the Orbweaver, which features a fully adjustable palm/wrist rest. However, considering the price difference, it’s something that can be easily overlooked.

Visually, the Tartarus is absolutely stunning. The entire keypad is done in a smooth matte black, and the keys are illuminated by bright lights that gradually change color. My only gripe about this is that you can’t shut off the backlight illumination, which some people might scoff at me for, but the backlights are a little bright, and I’d like to have the option to shut them off when I’m not using my computer. Otherwise, the Tartarus is just as beautiful as it is functional, and it made my $25 keyboard look like a big cheap hunk of plastic.

I tried the Tartarus on a number of different games, from first-person shooters like Borderlands 2 to RPGs like Dota 2 and World of Warcraft. Overall, the Tartarus made gaming easier for both genres, but I feel like it was better suited for games like Borderlands 2 and Battlefield. First-person shooters like Borderlands 2 don’t require as many key bindings as RPGs like Dota 2, so the Tartarus was perfect for this. It took a bit of time, adjustment and fiddling around to get the key bindings just right, but once I did I played for hours and kicked some serious ass. The spacebar trigger button that is accessed by the thumb on the Tartarus is so smooth, and the response time on it is impressive. I tend to key fap quite a bit in the heat of battle, and the Tartarus had no issues keeping up. I actually had to adjust to it physically responding each time I hit the jump button (spacebar trigger), unlike when I key fap on the spacebar of my keyboard and it only jumps half of the time. My other favorite part about the Tartarus is the clicky joystick it also features that makes it much easier to move your character’s view around. It’s much nicer than having to use the WASD keys on the keyboard.

Now, I did experience one major issue with the Tartarus… I’m 5’3”, 120 pounds, and generally considered a pretty small person. I could only reach the first two rows of keys on the Tartarus comfortably even at the smallest position setting on the palm/wrist rest. But even with this flaw I worked around it by programming my WASD and other commonly used commands—like reload and inventory access to the first two rows—and still loved the Tartarus. I had a few of my friends with “normal” sized hands try this out as well, and they had no issues with it, so if you are a small person like me with tiny hands, then you might not find the Tartarus as convenient as you should.

Overall, I absolutely love the Tartarus, even with my tiny hands. I think this product lives up to its hype and is totally worth the money if you are really into PC gaming. The keys are very smooth, the triggers are super responsive, and the Tartarus can happily survive my button-mashing. I just hope that one day Razer can make this in a size small for hobbit-sized people like me.