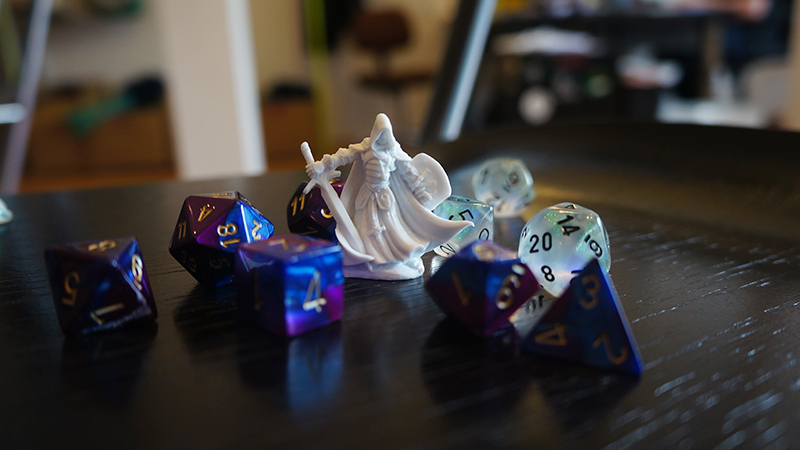 An Army of One’s Own

As a kid, I used to marvel at people’s miniatures. Every time I found myself at the hobby shop, I’d catch glimpses of epic battles being staged between Space Marines, War Machines and just about every manner of fantasy creature you can possibly imagine. Even though I wasn’t able to understand the rules of each game at the time, I kept thinking about those tiny, fantastical creations and how amazing it would be to have a little army of my own.

Sometimes, kindly geeks would allow me to hold and look closer at their tiny armies, telling me all the while about the various techniques they used to achieve just the right kind of shading, or the perfect touch of lighting that completed the piece. You see, there’s a kind of magic to miniatures, whether you know it or not. Miniatures can tell stories. They’re imaginations made real, crystallized into a physical form. A particular paint scheme can indicate a whole history of lore from an established franchise, or present one’s personal style and flair.

When it comes to individual miniatures, though, there’s nothing quite like letting stories arise from the various colors and states of their equipment. I love making a character and then finding the perfect miniature match, using their paint scheme as a window into the world I’m exploring. Painting itself is a kind of meditation, rewarding patient focus and the willpower to spend hours working on a single project. The best painters I know are calm, observant folk, and you can see the love they have for the hobby reflected in the minor technical details they affix to even their most simple creations.

Over the years, I’ve seen my fair share of miniatures, but the ones that always seem to catch my eye come from Reaper Miniatures. They’ve been around since 1992, and their pieces have only gotten more and more impressive with time. Their metal figurines are easily some of the best on the mass market, depicting everything from cyborgs to dragons to the town drunk. This makes them great for RPG adventures, where having a physical stand-in for your character can add to the immersion, but they also make for some incredible head-turning show pieces when fully painted.

However, metals can be kind of intimidating for those who are just starting out in the hobby. The folks at Reaper decided to try their hands at plastic figurines and, after a brief experimentation with the pre-painted Legendary Encounters line, the company decided to try unpainted plastics. Bones is the end result of that experiment, and has become insanely popular over the last three years.

When I first got my hands on one, the first thing that struck me was how much detail Reaper was able to get out of their polymer. While Reaper’s metal is hard enough to allow for incredibly subtle detail, most plastics simply don’t measure up. Bones miniatures, however, have a surprising depth to their design that seems at odds with the soft plastic. Instead of the blobby, vague faces that I’m used to seeing on other mass-produced plastics, Bones minis feature bold lines and stark ridges that rival even their metal counterparts. All of this comes with hardly any flash or seam lines, and what little remain can be easily removed with a razor or simply left alone.

One of the other neat things about Bones’ polymers is that it gave me a chance to paint directly onto my plastics. Usually, you need to prime your pieces before you even think of laying a brush on them, but with Bones, I often paint my basecoat directly onto the plastic in order to preserve detail. This also makes it perfect for those who just want to slap a little color on any given piece, but there’s enough stick to the surface that you can still work out every detail if you so choose. However, those of you out there who just can’t resist priming your minis should be warned—only use brush-on primer, or you’re going to end up with a featureless blob of paint and plastic!

Bones is even at a perfect price point for those who want to start out painting minis, or who just want to grab something to use in a pickup D&D game. Metal figs average about eight bucks a pop, but plastics are at a nice, healthy medium of $2–3. This also means that they make great practice dummies for less-skilled painters. I’m still a bit of a novice myself, so it’s nice to test out a color scheme on a Bones mini, especially when I’m about to paint something else that I absolutely want to get right the first time.

That’s not to say that Bones are somehow less legitimate than their metal counterparts, however, as some of my most gawked-at paint jobs are actually on Bones-line minis. In addition, Reaper has been converting some of their Dark Heaven Legends, Pathfinder and Chronoscope catalogs to Bones over the last three years, meaning that even in their brand-new plastics, you’re likely to find anything you need for that perfect miniature.

Bones is a truly exciting and interesting development in the world of miniatures, allowing even more people to check out the hobby without getting too intimidated by the prospect of gluing, priming and basing. Even the thought of grabbing a whole bunch of monsters, heroes and NPCs on the cheap is enough to make any DM salivate. If my childhood self had had access to this kind of technology, the Reaper himself wouldn’t have been able to pry me away from my painting table.

If you’re interested in checking out more of Reaper’s excellent line of Bones minis, go hit up their Kickstarter, which ends on Saturday, July 25. There you can see all of the new goodies that are coming out way in the third wave of this awesome series, and even get a screamin’ deal on a bundle of minis. Their core set is only $100, which comes out to just over $1 per miniature at the moment (way less than retail price!), and you can even pick up specialized Optional Rewards if you see a particular collection that tickles your fancy!