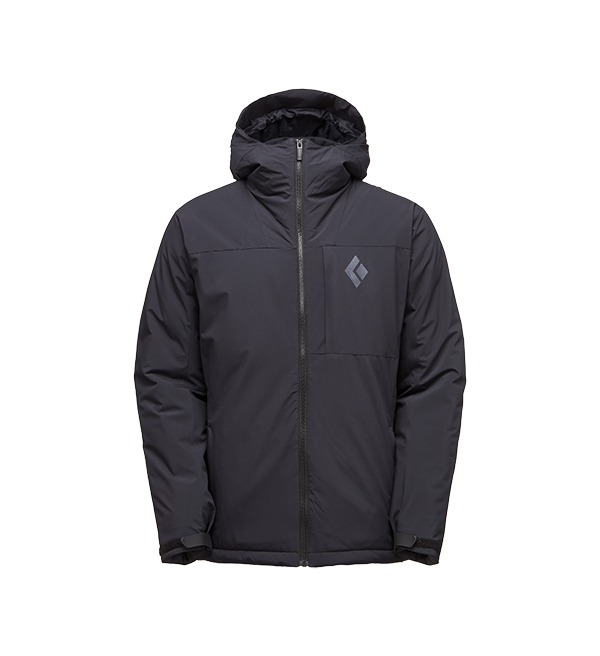 You may have thought that winter in Utah was totally canceled. It seems like it’s just kind of been shelved to cable. With precipitation still scheduled, whether you’re on the mountain or Downtown walking to lunch, snow is still water, and water can still get you wet. The winds of winter may still cut through to your flesh, and chilling water may seep through to vex you. And that’s no fun; is it?

I must admit that I’ve become somewhat of a Black Diamond fanboy. It also doesn’t hurt that they’re locally based in Utah. I fell head over heels for my Black Diamond Cold Forge Down Hoody last season, and it has served me well. I also recently acquired a Black Diamond Deployment Hybrid Hoody, and it’s fashion-forward and versatile (think anywhere from athleisure to hardcore-kid chic). The Black Diamond Pursuit Ski Shell ($279) continues the stoke that I feel with their product line. Its design features clean lines in a minimalist approach—just the way I like it. Wearing the shell around town generates a similar effect to that of an overcoat ever so slightly oversized in the arms. My impulse has been to dress it up with nicer clothes when I’m not using it as a shell. Of course, pound for pound, it’s still a ski shell and looks the part, but with some design elements that help it to go beyond a typical outdoor jacket stylistically.

I received a size medium (à la men’s sizing), as that’s the size of my Cold Forge Down Hoody. Logically, the Pursuit Ski Shell sits a bit bigger on my body compared to the hoodie, as it’s meant to be filled out with layers underneath it (hence the relaxed, slight overcoat appearance). When I wear the Pursuit Ski Shell over the Cold Forge, for one, I’m inside a veritable sleeping bag of warmth and protection from the elements. Also, the shell fills out nicely in proportion to my body with this manner of layering. The amount of possibilities of functional wear and layering with the Pursuit Ski Shell seem to be up to its wearer.

In and of itself, the Pursuit Ski Shell is almost as warm as the Cold Forge Hoody in an insulation sense. That must be the Thermolite synthetic insulation. With products that are designed for the cold/outdoors, I’ve got to feel toasty in it. And by golly, this coat touts that element in spades. Prior to any incredibly bitter-cold conditions, it serves just fine with a base layer beneath it. With that ability to insulate in its own right, it’s damn near a suit of armor when the wind is slapping against you while speeding against or through it—except, of course, with maximum mobility and comfort. Nor does precipitation stand a chance, as it’s waterproof. Black Diamond assures that it’ll also provide warmth even when wet, though it seems invincible to me. It’s kind of mind-boggling, as the outer fabric doesn’t feel plasticky but softly sturdy. You’ll also enjoy the other functional elements, like wearing a helmet underneath the pull-cord-adjustable hood, low-profile adjustable cuff tabs and a powder skirt.

When it’s time to fend off harsh weather conditions for good; when it’s time to invest in the one shell that will last years (you can feel its quality just by the touch); and when it’s time to don an outer layer that makes you feel proud even in cripplingly freezing weather, the Pursuit Ski Shell is the right decision. Additionally, when you support Black Diamond, you support someone working in the same state who helps to produce their garments and equipment. As far as quality goes, Black Diamond’s Pursuit Ski Shell is worth it. –Alexander Ortega