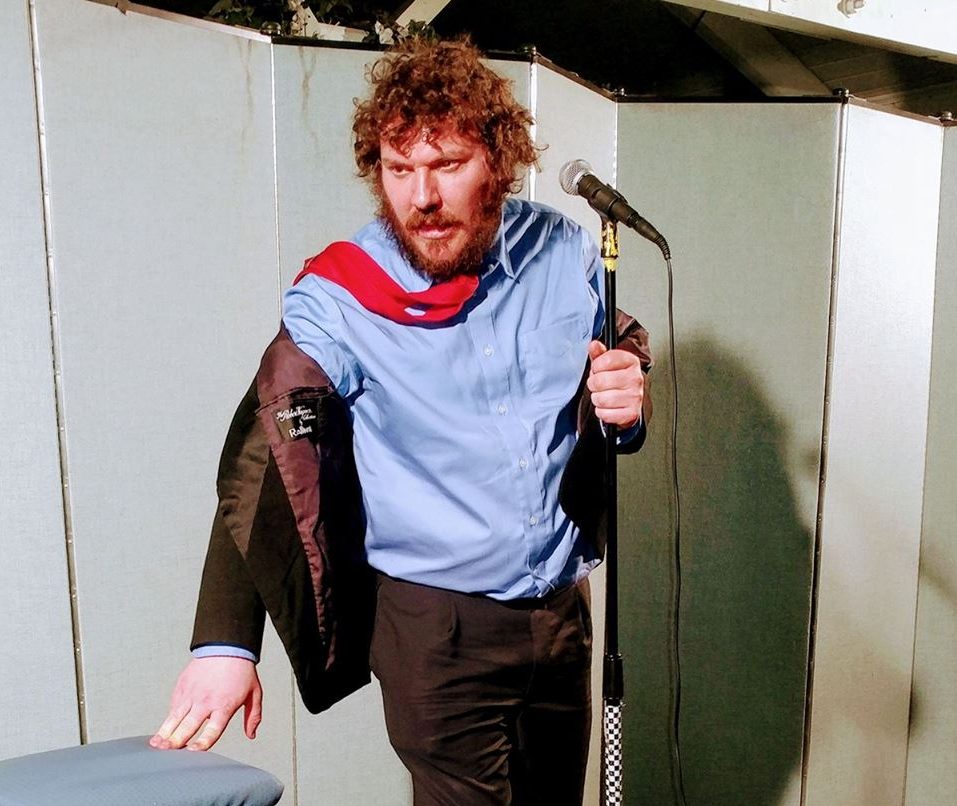 Robbie Brooks – The Far Side of the Mic

There’s passion and then there’s “get in line at 2 for the open-mic” passion. The second one, that’s Robbie Brooks. While some people get into comedy for fun, some get into comedy for a career. Brooks  was born for comedy, quite literally. Brooks dabbled in stand-up from a young age, but it wasn’t until a chance conversation at a comedy club in New York City that he decided that comedy was where he was meant to be. You see, he looks like a comedian, and he decided at that point that he couldn’t possibly be anything else.

Since he was a kid, he was an admirer of Rodney Dangerfield, Richard Lewis and Gary Shandling. Like them, he says, “You don’t have to pity me, I’ll do it myself.” In 2014 he found himself in New York City, and “I wanted to go to Dangerfield’s,” Brooks says. “Comedy had always been in the back of my mind.” He was just excited to get in and see a show. “The guy at the door starts talking to me and says, ‘You look like a comedian’.” Brooks does look like a comedian— jovial, quirky, like a well-adjusted and sober John Belushi or Artie Lange. “I get everybody,” he says. “How am I supposed to feel about this?” The door guy insisted it was a good thing, he had after all been hanging out there since the ‘80s, so if there is anyone who is an authority on it, it’s going to be this door guy. Brooks decided to give it a shot, but had to get out of New Orleans, where he was living at the time. “I decided to move to Utah and found Wiseguys,” he says this was when he decided it was time to finally just do it. The first time he hit the stage was June 2016. “I’ve been sick ever since. It’s a sickness,” Brooks explains. Now, you’ll see him doing a variety of shows from Ogden to St. George, showing up in line to get on an open mic list at 2.

He currently works with high school kids as a tracker, a kind of mentor. But his sights are set on comedy full-time. “I want to do this as a career. There’s nothing else. I didn’t go to college.” He’s a man with a plan, and a passion to execute. “I’ll be happy if I’m just working clubs, touring. I want to keep it down-to-earth, keep it fun. I’d love to be on TV , but I can be happy doing on the road stuff. It’s what I love. It’s my passion,” he says. He’s learned a lot from that first step on stage to now. “One of the things I’ve had is that I have a speech impediment. I used to talk really fast. Now I kind of stop and take a breath.” He puts the work in and pounds the pavement when it comes to being serious about stand-up, “there’s no short cuts,” he says.

Comedy can be a little ugly at times, “a little two-faced,” he explains. But he’s found his comedy family— a group of great comics and as he describes “awesome humans.” His advice to all new working comics: “Find your comedy family. Don’t just look for friends.” The difference is while friends can help you get on a show, “it’s best to find your comedy family and grow with them.” This family of his consists of several long time hard-working local comics: Eric ‘EK’ Kepoo, Matt Turner, Allen Carter, and Bryce Prescott. Together they do a monthly show in St. George at the Hilton‘s Office Lounge. “I would’ve never experienced that without them,” he says. He says that the word “family” fits his group well. “I think it’s because some of the older comics feel like older brothers (or sisters). EK and Matt are like big brothers.” He says, “We go through a kind of war together. Like brothers in arms, we are brothers in mics.” His approach to a show is to just get up there and have fun with it. “We have a job to do, and that’s make these people laugh. But at the same time, you don’t want to take it too seriously. You want to enjoy it,” Brooks says, “for us, it’s about having fun.”

He doesn’t do serious topics, no politics. He’s all about Comic-con, being single, and his mom. “I want the audience to get their minds off of things.” He simply wants the audience to have fun. “I want them to enjoy these few minutes with me and I want them to laugh. I don’t want them to worry about something,” Brooks explains. “We have an oasis of comedy where we’re like ‘come laugh, come enjoy us, see what we can do and just have a blast. Have fun with us.’” Everyone in his ‘oasis’ brings something different to a show.“I bring goofy to it,” he says. “You always have to be yourself, you can always tell when someone’s lying on stage.” His self-deprecating humor is catharsis for him, not a cry for help, though. “Comedy comes with a lot of depressed people, a lot of us are depressed. But why beat yourself up over the one thing you can kind of use that depression as an anchor and use it as fuel for something good like comedy?”

You can see Robbie Brooks perform January 29th at Wiseguys From the Far Side of the Mic. The show is only $5 at Wiseguys, Downtown at the Gateway. Show at 7, doors at 6. 21+.  “It’s going to be goofy, it’s gonna get weird,” he says.