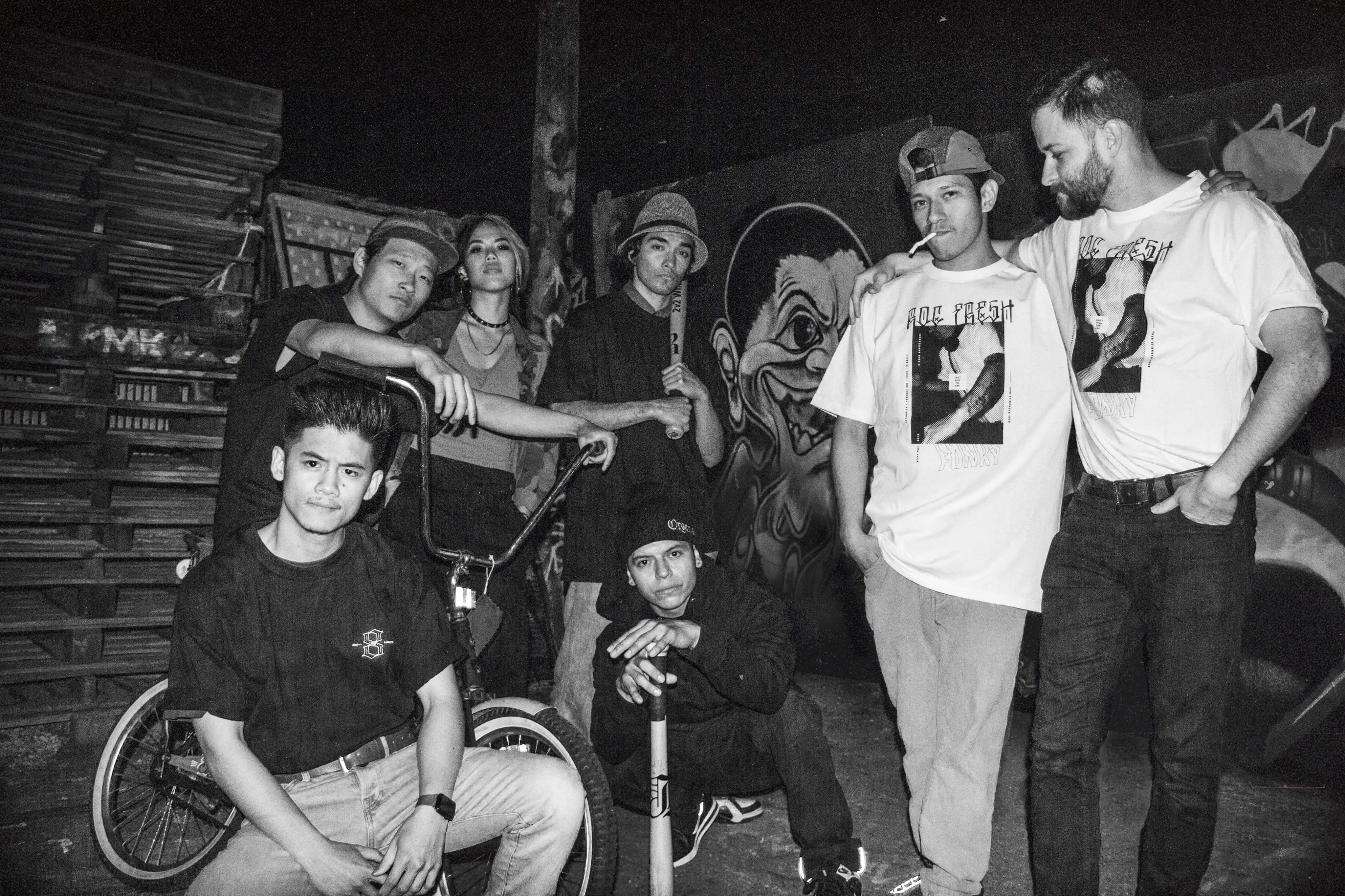 Roc or Die: An Interview with the Body Roc Crew

When I met B-Boy Alien, I was in college—a thirsty journalist ready to take on anything he could get his hands on, whether it be freelance writing or broadcast radio. My desire for knowledge took me to Uprok where an ornery DJ by the name of Street Jesus taught me the archaic ways of beat-matching without a computer, sort of like Pai Mei would an over-eager kung-fu pupil.

Standing in the DJ booth, I see a b-boy. He’s a Chilean puma, and the floor is his prey. His glare is cold and unyielding as he postures himself around a small stretch of the hardwood jungle on State Street. It’s time to get down. Everything he does is done passionately and with confidence, footwork, floor work and power moves—but his way is not the only way to get things done. I came to learn, over time, that the man I called Alien wasn’t such an outcast; he had a crew of like-minded individuals with assorted personas—from Denver to Korea—who helped him represent Utah (and hip-hop) in various venues.

They go by the Body Roc Crew and members, Ali Acuna and B-Boy Alien have attended (and won) battles in Las Vegas and Florida, respectively: Ali with the RedBull BC One and B Boy Alien with the Break the Chainz Volume Five. It’s the epitome of putting on for the city—and they do it with little fanfare.

SLUG: Ali, what’s the purpose of having an eight-year Anniversary?
Acuna: We are the third generation of Body Roc. It did die for like eight or nine years, and me, Max and Mig-187 decided to bring it back. Originally, the crew started in Rose Park. I think the importance of the eight years is that we decided to bring it back, and since then, it’s been eight years and we’ve been going strong—I think we’re gonna try to keep it going.

Baby Blue: So, the other part of that is usually you would do a 10-year anniversary, but I think that just the way the crew’s been going and the timing of everything—we’ve been traveling a lot and competing a lot and trying to be more active in the community and stuff like that, so it seems more appropriate rather than to wait an extra two years to do a bigger event that we keep building on the momentum that we’ve already been cultivating and do something now.

SLUG: Has it been a long eight years, or has it gone quickly?
Baby Blue: I think it’s gone by way fast. If anything, I feel like it has only been three or four years since we started doing it. That being said, we grew, and the crew grew really fast, too. So, it started out with just three of us, and then it was like every year we got one or two people down until we settled on this number that we have right now.

SLUG: Tell us more about your history.
Acuna: Body Roc started in the early ’90s with some b-boys from Rose Park and West Valley. It got passed on to these [younger] kids from Rose Park as well. They carried on the second generation of Body Roc. The first members kinda faded away—they got older or they quit. And then, these guys [the second generation] … same thing happened to them. They just got older and started doing other things, [and] they didn’t care about breaking as much and just hip-hop in general. The second-generation members were originally Javy, Jermaine and Nick and then they brought on Eric Salazar and Miguel Olague, Mig-187, the guy that brought it back with me and Max in 2010 after almost 10 years after they kinda let it die.

SLUG: What’s the importance of traveling and entering competitions?
Dimalanta: The importance is kinda just like building with one another and going out of state to represent, ’cause we’re already here as a family—practicing, gettin’ down and hanging out all the time, so when we go out of state, we bring that energy, too. I think it’s important to represent who we are when we go out of state, and I feel like people feel that. Even at the last jam at Break L.A., I felt like we made some noise, and we represented for sure.

Baby Blue: Yeah, I think a big part of it is also trying to get a name for a state like ours. Salt Lake City really isn’t known for countercultures, so when we go to scenes like Los Angeles, Denver and Las Vegas, I think we definitely leave a mark for the scene of Salt Lake City … especially for one of the crews in Salt Lake, our crew definitely addresses a broader audience outside of Salt Lake.

B-Boy Alien: It’s very important—you know what I’m sayin’, ’cause we’re the only crew in Utah that goes out and reps, represents hard—out of all of them—and we’re the one that gets the least respected. If there was no Body Roc, there wouldn’t be a dope b-boy scene in Utah. We keep it 100 percent.

Acuna: Whenever we go out of state and we say or tell them what city we’re coming from, they think Mormons and conservatives—but that’s just the state. I think—for me, personally—every time I go out and do a battle, I represent the city I’m from, Salt Lake City, because this is where I grew up, and this is where my crew is at. Also, one of the biggest misconceptions is that people think there is no hip-hop scene, there are no b-boys in Salt Lake City, when in reality, I think it’s one of the strongest in the area, even when compared to places like Las Vegas or California.

SLUG: Explain the importance of b-girls and b-boys to hip-hop culture.
Wyatt: If anyone has ever read or watched anything about the inception of hip-hop, a lot of it revolved around the dance first. I mean, obviously the music and the DJs [as well]. The standpoint of hip-hop being a party culture—you go to a party—the understanding is that you’re going there to dance and you’re going there to be social, meet people and have fun. I think the entirety of the culture revolves around “the dance” and people meeting each other… and then they go out and do graffiti, and then they go out and learn how to DJ because they wanna be part of the host of the party. Then somebody’s the emcee because they want to keep other people hyped to keep people dancing.

It’s the epicenter of hip-hop culture, and it’s starting to be overlooked because it doesn’t carry any sort of monetary value like the way that graffiti, dj’ing and emceeing does, of course.

B-Boy Alien: I started emceeing and doing graffiti before I was b-boying. Throughout the years ,[I realized] that it’s the hardest element of hip-hop culture. Because you could be a graf writer and just chill and write graffiti. You could be an emcee and just write rhymes. You could be a DJ and just sit down and make some beats, make some scratches, but to be a b-boy, you gotta get your ass up there and do something physical—you know what I mean? So, to me, it’s the hardest element of hip-hop.

SLUG: Tell about the crew, style-wise. Whom do you admire?
Nelson: I really enjoy watching Max break, because when I started breaking, I was really into footwork, and I still really am—and he was super good at footwork. But more than that, as time went on and the more I learned about breaking, the more I could appreciate Max’s footwork. From afar, when you first start breaking, it kinda looks cool because he’s going around and doing, like, steps and stuff, but later, when you get past the foundation and you really start diggin’ deeper into the concepts of footwork, is when his footwork becomes that much crazier.

I like Ali because he has a lotta shit. He has all the moves that I want to have, but he does them so easy that it’s frustrating, but also dope at the same time.

SLUG: What the most difficult aspect of dancing?
Chung: So, I’m kinda the black sheep in the crew. I’m not really a b-girl, and I’m the only girl, so I feel like my views are slightly different because I do styles and funk styles. For me, it’s all mental. Obviously, the physical [aspect of dancing] is a big part of it, too—if you don’t take care of your body, that affects everything if you’re a dancer. But I think biggest part is the mental challenge. Whether you’re cyphering, whether you battling, competing: Everything is all mental. If you feel like you’re the shit, then you’re gonna be the shit. If you don’t, people are gonna sense it. So it’s all a mind game.

Wyatt: For me, a quote from Angela Davis comes to mind. “Radical means grasping things at the roots.” I feel that if you know your history in breaking, it shows through your dancing. You don’t have to say anything. It’s just the fact that you know the foundation and you know hip-hop. It speaks volumes in your footwork and your steps and your movements.

Acuna: Moves are just moves. History and knowledge is something you gain throughout the years. You can practice all you want, but if you don’t study this culture, you’re gonna stay the same forever.

If you consider yourself to be a head, you owe it to the community and yourself to catch them at a showcase or competition at least once to see if you enjoy yourself.

B-boy Alien summed it up best: “Stay true to the art form, support each element (that’s why it’s a culture), and real b-boys and b-girls will never die #rocordie.”