00:00 / 20:24
Spotify Stitcher
RSS Feed
Share
Link
Embed
Austin-based artist Michael Sieben may not be a household name, but his art has been seen by skateboarders, art aficionados and mall-walkers for close to a decade, even if people haven’t been able to match the name with the artist. Sieben will be one of more than 20 artists submitting pieces to Salt Lake City’s own FICE for their All Dead art show, being displayed on Friday, Nov. 2. Sieben was awesome enough to talk to SLUG about his influences, past galleries and skateboard company, Roger Skateboards. 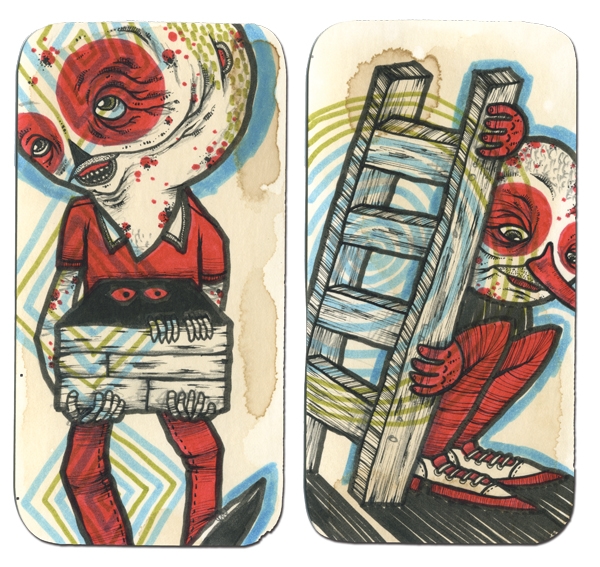 Austin-based artist Michael Sieben may not be a household name, but his art has been seen by skateboarders, art aficionados and mall-walkers for close to a decade, even if people haven’t been able to match the name with the artist. Sieben will be one of more than 20 artists submitting pieces to Salt Lake City’s own FICE for their All Dead art show, being displayed on Friday, Nov. 2. Sieben was awesome enough to talk to SLUG about his influences, past galleries and skateboard company, Roger Skateboards.

“I’ve been interested in drawing as long as I can remember,” says Sieben. “My parents still have old sketchbooks in their garage from when I was in junior high … terrible drawings in those things.” When he was young, Sieben had dreams of becoming a children’s book illustrator, drawing on the influence of children’s book authors such as Maurice Sendak, Dr. Seuss and Richard Scarry. That all changed once he discovered skateboarding. “I became totally obsessed with the graphics that I saw at the local shop,” Sieben says. “This was in the mid-to-late ’80s, so I’m mainly referring to Jim Phillips, Vernon Courtland Johnson (VCJ) and Pushead.” He refers to these three artists as his “holy trinity.”  Later influences include many of his friends and contemporaries, such as Travis Millard, Todd Bratrud, Jeremy Fish, Mel Kadel and Lori Damiano.

Sieben launched his first art gallery, Camp Fig, in the early ’00s. “My wife Allison and I opened Camp Fig with our good friends Lee Brooks and Katie Friedman,” he says. “Essentially, we didn’t feel like there was an art venue in Austin exhibiting the type of work that we related to.” Rather than continue complaining about this fact, the group threw caution to the wind and opened their own art space. They found a small retail space in downtown Austin and split the rent four ways. “That probably sounds more ambitious than it actually was,” says Sieben. “We found the tiniest retail space possible in downtown Austin and split $500 rent—totally manageable.” After a few years of running Camp Fig, the group’s motivation was waning, and they brought in new members to help run the space. Ultimately, the goal was to move into a bigger (and hopefully better) spot, but, along the way, all of the original members of Camp Fig—excluding Sieben—bowed out, and it made more sense to all involved to rename the new gallery so that everybody would feel the same amount of ownership. This move resulted in the birth of Sieben’s current gallery, Okay Mountain. “Okay Mountain was born in 2006, and we’ve hosted 47 shows since our inception,” says Sieben. Okay Mountain has been exhibiting work as a collective, and that practice has gradually taken priority over running a commercial gallery. The space currently serves a purpose mainly as a studio, although there is still the occasional art show. “Last year, we were offered representation by the Mark Moore Gallery in Los Angeles,” says Sieben. “We’re all very excited about the future of Okay Mountain, but we’re also working very hard to figure out new modes of working because most of the group has moved away from Austin at this point.” Sieben is also quick to point out that neither Camp Fig nor Okay Mountain has been monetarily successful, but he stresses that both have been extremely rewarding in terms of life lessons, friendships and continuing art education post-college.

Sieben’s work extends far beyond the reaches of his Austin-based gallery, however. Heavily involved in BMX bicycle riding—specifically freestyle—when he was young, one day, Sieben accompanied some friends to the home of an acquaintance who happened to have a little quarter pipe in his carport, as well as a Nash Executioner skateboard. “After a few hours of playing around on that thing, I was sold,” he says about his first skateboarding experience. “I quit freestylin’ that day, and I’ve been thrashin’ ever since.” Due to this seemingly happenstance occurrence, Sieben eventually found himself reading the be-all-end-all of skateboarding magazines: Thrasher. Unbeknownst to him, years down the line—in 2004, to be exact—he would be presented with the opportunity to contribute to the magazine. “I was making tons of zines, and some of them fell into the hands of Michael Burnett—Editor-at-Large of Thrasher,” he says. “He gave me a heads-up that he was going to be on a skate trip and coming through Austin.” The two met up and skated, and, a few weeks later, Burnett called and offered Sieben a staff position with Thrasher. Sieben refers to this as “one of the best phone calls I’ve ever had in my life.” From growing up reading Thrasher to being given the opportunity to write, illustrate and simply contribute to its pages is not something Sieben takes for granted. “One of my favorite things about writing and illustrating for Thrasher is … just that,” he says. “I’m stoked to be the Texas nerd that somehow got the opportunity to share my voice and art with the next generation of shredders.”

Not one to rest on his laurels, Sieben was not content simply to create art and be on the staff of the granddaddy of all skateboarding magazines: He began partially running (although not owning) a skateboard brand called Bueno, which was owned and distributed by Giant Distribution. Giant eventually filed for bankruptcy and ultimately took the Bueno brand down along with it. Sieben unsuccessfully tried to acquire the rights to the Bueno name and logo, and, instead of sitting around, “crying about it,” so to speak (“Actually, we did cry a little bit,” he says), Sieben and his partners decided to put their money where their mouths were and launch their own brand. This brand became Roger Skateboards. “So far, what I’ve learned is that it’s awesome to own your own company because there’s nobody sitting behind you telling you what not to do,” he says, “but I’ve also learned that it’s very difficult to make money running a skateboard company.” He admits that this was something he’d heard for years, but never truly appreciated until he found himself in the owner’s chair.

As if Sieben wasn’t already busy enough, earlier this year, Roger Skateboards collaborated with Fairdale Bicycles to create a limited-edition bike/board combo called “The Roger.” “Taj Mihelich runs Fairdale Bicycles, and he’s also the person that gave me my very first art job,” says Sieben. Mihelich was a co-owner of Terrible One bicycles, and hired Sieben as an art director back in 2005. “He’s no longer a part of Terrible One,” says Sieben, “but the Fairdale/Roger collaboration happened because of our previous work and friendship history.” Sieben says that the feedback has been overwhelmingly positive, and he’s looking forward to working on another future collaborative project with Fairdale. “Maybe we’ll release a boat/life jacket combo this go ‘round,” he says. “The future is inherently mysterious.”

Now that we’re all up to speed on who Sieben is and what he’s about, it’s time to discuss his involvement with the upcoming All Dead art show, on Friday, Nov. 2 at Salt Lake City’s own FICE. “I think Elf [Shawn ”Elf” Walters], one of the Terrible One riders, put me in contact with FICE,” says Sieben. “That’s the connection.” FICE’s co-owner Corey Bullough has been a huge fan of Sieben’s work for many years now. “I remember the first time I saw one of his pieces—it was actually a Volcom sticker of a monster eating a Volcom stone,” says Bullough. “It said something like, ‘Your recommended daily allowance of awesomeness,’ and it makes me smile every time I look at it. I still have it tucked away in a book somewhere.” Bullough bestows extreme praise on Sieben’s art. “His shit is so OG, and his monsters are boss!” says Bullough. “I love the pale and muted color palettes he uses, and the expressions he puts on his creations are so rad—super unique style and flavor.” Bullough adds that he sees Sieben’s art as being an inspiration to many artists, and states that he thinks several people have actually “ripped his shit off.” “He’s most definitely a pioneer in the whole skate/bike/snow artist collaboration world,” concludes Bullough. Sieben sheepishly admits that the piece he is submitting for the show hasn’t been completed as of this writing. “I hope it’s awesome, though,” he says.

Sieben wraps up his discussion with me by stating how thankful he is for any and all opportunities that have come his way. “Thanks for taking the time to interview me, and thanks for promoting your scene in Salt Lake,” he says. “Stay happy, hungry and humble … and thanks to anybody who made it all the way through this interview—I appreciate your time as well.” The man and his art are worthy of your attention, so do whatever you need to in order to attend the All Dead show at FICE (160 E. 200 S.) on Friday, Nov. 2. Visit Sieben’s website, msieben.com, for more information about the man himself, and visit the Roger Skateboards site, rogerskateboards.com, for your next deck.