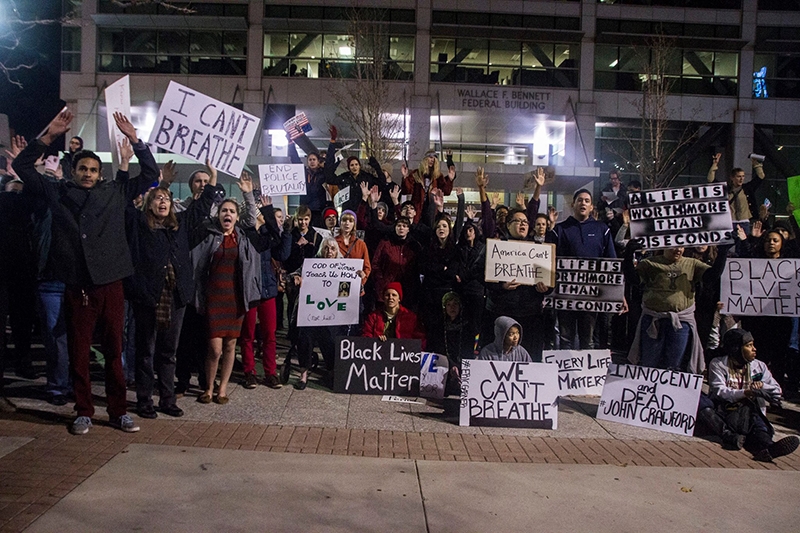 The apparent lack of justice for marginalized groups has left the bitterest taste in the mouths of an already furious public. One doesn’t need to look too far to find fuel for growing controversy. It is being readily supplied, courtesy of a justice system that many feel is unjust. The decision by a Staten Island, N.Y. grand jury to not indict NYPD Officer Daniel Pantaleo on his use of a chokehold that resulted in the death of Eric Garner has furthered the raw outrage that is already greatly felt across the nation. This decision comes despite the attending medical examiner’s report that Garner’s death was considered a homicide.

To make matters more confusing, Ramsey Orta, a friend of Eric Garner and the person who filmed the police assault, was the only person indicted for criminal weapons charges. These charges are being challenged on the basis that they are being mounted in retaliation for exposing the circumstances of Garner’s death. Finally, to top this growing controversy off, the pronouncement comes almost a week after a similar ruling in the Mike Brown case. In reaction to these events, and in solidarity with other protests around the country, the grassroots organization Utah Against Police Brutality has put together a demonstration for the evening of Dec. 6.

After parking my bike at Nostalgia Café, I find that I am early to the rally. Though it is not quite kicking off time, there are a growing number of folks braving the December cold in front of the Wallace Bennett Federal Building. Talking briefly with DaKishia Reid of the Cedar City Peace and Justice Coalition, she says “I don’t think—especially for people of color—that this is really a new topic. I don’t think that this is something that is surprising. If anything, what is new is that it is being paid attention to more, and that people—other people—are standing up and realizing that it affects all of us.”

Among the crowd is an SLCPD officer who asks around about who is in charge of the rally. Not surprisingly, he doesn’t get a direct answer. He then proceeds to chat with protesters about the abilities of the camera he is wearing and if needed, that he is on hand to help people express their rights. Though appearing friendly, the exchange between the officer and demonstrators comes across as remarkably awkward. Later on, I overhear the incident being retold with some mocking undertones.

Bringing the growing group of protesters to attention, organizer Chris Manor starts the rally by reciting the last words spoken by Garner and ending the quotation with the now tragically iconic words, “I can’t breathe.” Manor then proceeds to speak out against racism in all forms of personal relationships and its ever-apparent systematic presence. Another speaker, Jessica Arter, emphasises that the United States was founded on racist principles and calls for people to get involved to help organize the growing movement against police brutality. Lex Scott speaks of the need to remember the victims of police violence like Tamir Rice, Brown and Garner. She says “They want us to forget, so will remember them.” During pauses in the speeches, the crowd chants, “No justice, no peace, no killer police,” “Black lives matter,” and the call for international solidarity against oppression: “Ferguson to Palestine, occupation is a crime!”

Taking the microphone, Reid leads the protesters in the civil rights anthem, “We Shall Not Be Moved.” She demands that the people “hold the system accountable.” After the conclusion of her speech, there is some question as to what to do next. Passionate anger and sadness is evident among the demonstrators, and it is growing. I notice that some are moved to tears.

Apparently, the last speaker has disappeared for a quick bite to eat, so organizers try to keep the energy present by continuing the chants—but this energy can only be contained for so long. Soon, and with a warning that there is no permit to march, the 400 to 500 people take to the streets. The huge mass of protesters marches toward the City Creek Mall and continue up Main Street, stopping under the bridge that divides the shopping centers. In the middle of the street, the protesters conduct the first of what will be several die-ins in the middle of the road.

This display of civil disobedience captures the attention of the shoppers milling about. While there are many who appear confused and even amused by these actions, there are also those who also lend their support. To further push the message of the protest, the demonstrators conduct the second die-in in the middle of Temple Square. The activists are surrounded by bewildered Mormons out looking at Christmas lights with their families. It is an awesome spectacle, to be sure.

The demonstration continues up and down State Street, even going through Galivan Plaza where another die-in is performed in front of alarmed ice skaters. The protesters then conclude the march segment by blockading the intersection on 100 South and State. As they position themselves to stand their ground to obstruct traffic, they chant, “This is what shutting [the system] down looks like!”

For the most part, the demonstrations and acts of civil disobedience remain peaceful, though there are some near-misses. Most notably, a protester is hit by a car while marching on South Temple toward State Street. The activist is OK, but reacts angrily by bashing the car with his fist. Other demonstrators rush to check out the situation and confront the driver. One person even takes a picture of the license plate for accountability purposes. Another confrontation occurs, when a passionate protester, who has been visibly agitated by events, nearly comes to blows with a bystander over what appears to me as a miscommunication. Both instances involve other protesters and even some police officers acting as peacekeepers. To be clear, there is no coordination or communication between the two forces during said instances.

From the very start to the end of it, the police are always on hand. As soon as the march kicks off, bike cops roll out, providing a sort of escort. At other times, the police even act a mobile blockade as they hold back and divert traffic away from the various actions conducted by the demonstrators. Their presence is noted, but they never really disrupt the demonstration. It seems to be a smart tactic to allow the protests to continue on while keeping the peace and avoiding a confrontation that would make SLC look like Berkley or Ferguson.

During the activist blockade on 100 South and State, there is a call for a moment of silence to remember Eric Garner. After this, some protesters start making their way out to go home. The exodus is disrupted when a single person yells out, “If you’re a white person, you better fucking stay!” The protesters regroup and it is clear that white privilege must be kept in check. One does not simply leave after something like tonight. The actions taken are a part of a larger and more significant game-changer.

There is word of people deciding to continue the blockade, even after speaker Greg Lucero calls an official end to the rally. Before the last word is given, Lucero warns the assembled body to practice the rules of security culture to protect the confidentiality of the demonstrators. Finally, he warns everybody to practice the buddy system when leaving so that individuals are not picked off by the police.

Catching up with a small group walking past the police blockade, it is clear that these guys are going to stay out for a while. While many have decided to go home, at least 40 to 50 protesters continue to hold down the fort for a few more hours. This might be the first time Salt Lake City has seen the practice of civil disobedience in action on this scale, and compared to other parts of the country, the police reaction to it was light-handed. In Berkley, Calif., a similar protest was held and the riot cops were called out in force to quell the demonstrations. Social media news feeds were filled with pictures of tear-gas-filled battles between protesters and police.

It seems that folks are finally getting fed up with what they perceive is clearly an unjust system that upholds blatant inequality. This is just the beginning. If you would like to learn more on what is happening locally, check out the Utah Against Police Brutality Facebook page for updates.

There will be a planning meeting on Dec. 17 at the Downtown Public Library.

Special thanks to Prum Ty, who provided photos of the event. You can find more of his photos at Shot By Prum Ty.